Fanboy Fix: Cowboys & Aliens, Men in Black 3 and Movie Posters from the Future 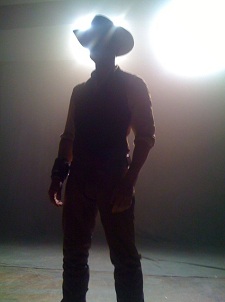 Director Jon Favreau built up such a presence on Twitter when he was filming Iron Man 2 that he's now bringing all of his awesome tweets to the set of Cowboys & Aliens, which is shaping up to be quite the epic sci-fi western , due in theaters on July 29th, 2011. While running some camera tests, Favreau tweeted our first look at what the cowboys will look like in the film … and, surprise, they look just like cowboys are supposed to look! I wouldn't try to guess as to who this person is; he's probably just a crew member helping out with the camera tests and not one of the all-star cast, which, in case you don't know, includes Daniel Craig, Harrison Ford and Olivia Wilde, among others.
'Men in Black 3' Grabs a Villain
Looks like the third installment of the Men in Black series is beginning to take more shape. Deadline reports that Jermaine Clement (star of Flight of the Conchords and all around hilarious dude) has joined Men in Black 3 as the villain Yaz. No word on who or what Yaz is, but knowing Clement is behind the controls definitely makes me feel better about the direction this film is heading in. Will Smith, Tommy Lee Jones and Josh Brolin also star.
Movie Posters from the Future 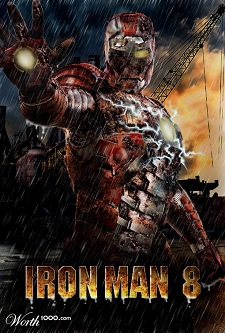 As part of a fun photoshop contest over at Worth 1000, readers were asked to submit their best photoshop jobs for movie posters from the future – meaning, they needed to come up with a future movie and then design its movie poster. Aside from films like Little Miss Moonshine and Down (the sequel to Pixar's Up), we also got this pretty amusing poster for Iron Man 8. Yup, looks like Iron Man's eighth film has totally caught up to the guy – you can barely even recognize that it's Iron Man. One too many times to the Laundromat if you ask me. Check out all the posters over here and let us know which are your favorites.
Like it? Share it: