Stoner comedies are hit or miss, so to speak. It's nearly impossible to watch one without cracking a smile at something, but they're often lazy and the laughs come cheap. But Pineapple Express, the most recent comedy from Judd Apatow & buds, is a rollicking, R-rated, reefer-filled romp, with Seth Rogen playing straight man this time to James Franco's spacehead stoner dealer. 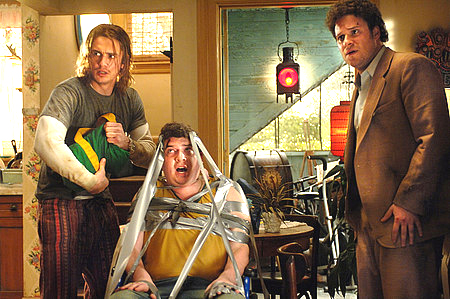 The story gets rolling after they accidentally witness a local drug lord commit a murder and go on the lam along with fellow dealer Red (Danny McBride, in a great turn), stumbling and bumbling toward an action-packed, Chuck Norris-style finale that's surprisingly violent. It's not a perfect comedy, and falls short of the bar set by Superbad and Knocked Up, but for some easy laughs from likable characters pop this one in. Definitely go for the unrated 2-disc or Blu-ray edition. Both have loads of extras including a table read with the stars; shots of the actors' different line delivery; the actors' reactions to smoking the super-secret government weed; details about the action and lots more.