Amid all the various rumors surrounding the inevitable third movie in the Expendables franchise, two in particular have been at the forefront - would Steven Seagal star and is Jackie Chan on board? Sylvester Stallone took to his Twitter last night to clear a few things up.

Stallone had been busy filming the boxing flick Grudge Match with Robert De Niro. According to Stallone, filming on that movie wrapped yesterday with the actor tweeting, "Finished Grudge Match with De Niro and the fight was epic! This movie looks amazing and crowd pleasing! Life is good!"

While we await to see footage of the two 60-something guys smacking each other around in a boxing ring, Stallone followed with four consecutive tweets addressing The Expendables 3. That string of tweets begins with Stallone announcing that he has begun writing the script for the movie. 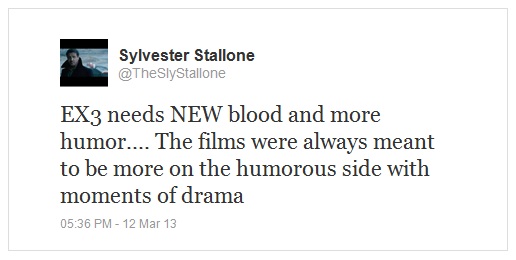 Stallone then says that Seagal won't be in the film, but confirms that he is in talks with Chan. There were reports late last year that Chan had prematurely announced that he was going to star in the next movie.

Stallone, looking to clarify his point about "young bloods," pegs an age range and body/personality type. He also says that he'll be adding a young woman to the cast who is "funny, tough, real."

Judging from his description of the "tech wizard, super brains," might we see someone like Anton Yelchin, Nicholas Hoult, Ben Barnes or Jay Baruchel? Maybe Stallone goes for a more bankable name like Zac Efron, Josh Hutcherson or Jesse Eisenberg?

And who might be up for the young female role? Immediately Gina Carano jumps to mind. The "not a sex symbol" tag is a bit subjective, but does that rule out the likes of Olivia Wilde, Mila Kunis and Scarlett Johansson? Certainly those three wouldn't immediately jump to mind for an action movie, but they fit Stallone's character mold. Other actresses that fit Stallone's description could include Mary Elizabeth Winstead, Kat Dennings, Teresa Palmer and Abbie Cornish.

So now that we've heard from Stallone himself, let's hear some of the new "young bloods" that you'd like to see in the movie?