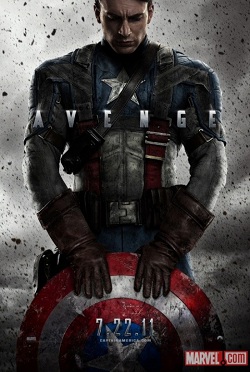 Captain America Gets a Gritty Poster

We’re now less than two days away from the official trailer premiere for Captain America: The First Avenger during the Super Bowl, and after already surfing through a number of new images, we now have an official poster featuring Captain America himself holding his shield, looking down, while a bunch of dirt kicks up in the background and the word "Avenge" stretches across the middle.
Check it out and let us know what you think. Captain America: The First Avenger hits theaters on July 22nd.
Lois Lane is Not the Female Lead in the New ‘Superman’
Hot on the heels of Lois Lane casting rumors comes word from Variety that Lois Lane is not the lead female in the film. Instead, they’re currently looking at three foreign actresses – Alice Eve, Rosamund Pike and Diane Kruger – for the lead female role opposite Henry Cavill in Zack Snyder’s Superman movie. The fact that all three ladies hail from Europe leads us to believe this version of Superman may actually leave Metropolis for a little globe-trotting. More as it comes in …
Eva Green Lands ‘Dark Shadows’ Role
The Tim Burton-directed adaptation of the 1960s supernatural TV series already has Johnny Depp attached to star, and now we can add Eva Green to the list. She’ll join Jackie Early Haley and Bella Heathcoate in the film about a witch (Green) who has a love-hate relationship with a 200-year-old vampire (Depp). Look for this one to hit in 2012.
Like it? Share it: