Poll: Who Will Win the Weekend?

Unlike last weekend where it was a straight-up battle between Watchmen and Race to Witch Mountain, this weekend we have several more films entering the wide-release race. They are: I Love You, Man, Knowing and Duplicity. And while the competition waters are rough, don’t underestimate last week's hot contenders. Here’s what we're looking at:

I Love You, Man
What's the Scoop: Paul Rudd plays a dude who's getting married, but can't find anyone to be his best man. Thus, he goes searching for a new best friend and winds up wooing the fun, hip and outgoing Jason Segel (Forgetting Sarah Marshall). But will their newfound bromance cause a riff in our hero's real romantic relationship?
Why It Could Win the Weekend: The trailers look hilarious, and after two weeks of superheroes, family flicks and horror, folks might be looking for a little comedy.

Knowing
What's the Scoop: Nicolas Cage returns to the screen as a teacher who opens a time 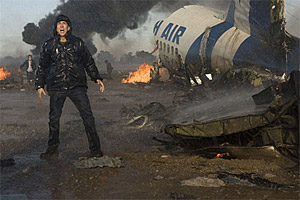 capsule only to learn that it's already predicted events of the past and is predicting horrible things for the future. Can he stop these events from happening? We think maybe …
Why It Could Win the Weekend: Because some folks seem to really dig Nicolas Cage, and the sci-fi elements – combined with a friendly PG-13 rating – may be the best option for teenagers looking to escape to a darkened movie theater.

Duplicity
What's the Scoop: Clive Owen and Julia Roberts star as a couple of corporate spies/ex-lovers who reunite to pull off the ultimate con job on their respective bosses.
Why It Could Win the Weekend: It's got Julia Roberts…and her giant smile has won over millions of folks in the past.

Before you make your predictions, you should know that according to Fandango's fantastical statistics wizard, Watchmen is still leading the ticket-buying pack with 27%, with Knowing in second at 11% and I Love You, Man in third with only 5%. That said, last weekend Watchmen was in the lead and Race to Witch Mountain won – so it’s entirely up in the air. Sound off below...