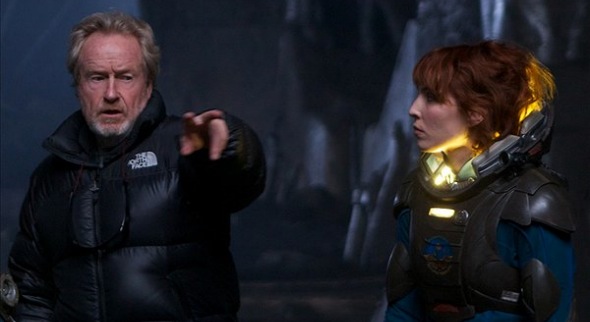 Sir Ridley Scott appears to be feeling reflective. After directing a string of impressively original features that include American Gangster, Kingdom of Heaven, the underrated Matchstick Men and Black Hawk Down, Scott is revisiting his earliest classics. He’s prepping a sequel to his seminal sci-fi thriller Blade Runner, according to reports. And this weekend, Scott unleashes a meditative companion piece to his pioneering horror masterpiece, Alien.
Don’t excuse nostalgia for Scott resting on his laurels. Prometheus asks some very big questions about life, existence, the afterlife, and the alien influences on our home planet. It also boasts breathtaking performances by Michael Fassbender and Noomi Rapace. But it’s with those philosophical and religious mysteries that I chose to start with Scott for our exclusive one-on-one interview.
** Be warned! Scott was very open and specific about Prometheus. As a result, there is a lot of detail in this interview that you might not want to know until after you’ve seen Prometheus. Please proceed with caution! **
Fandango: Thank you, first, for giving us a film that we need to contemplate and discuss and argue about for days without ever really coming close to answering all that it asks. It feels like it has been too long before we’ve been treated to a meal such as this.
Ridley Scott: Thank Christ! I think that’s great.
Fandango: The film asks very big questions about where we come from as a species, and where we go when we die. It’s not possible to deliver concrete answers, but I’m hoping you can tell me how, in the planning stages of the script and story, you came to decide which open-ended, philosophical questions you would at the very least attempt to answer definitively.
RS: Well, from the very beginning, I was working from a premise that lent itself to a sequel. I really don’t want to meet God in the first one. I want to leave it open to [Noomi Rapace’s character, Dr. Elizabeth Shaw] saying, “I don’t want to go back to where I came from. I want to go where they came from.”
Fandango: So that was always going to be the natural ending for this film?
RS: Totally. And because they’re such aggressive f**kers … and who wouldn’t describe them that way, considering their brilliance in making dreadful devices and weapons that would make our chemical warfare look ridiculous? So I always had it in there that the God-like creature that you will see actually is not so nice, and is certainly not God. As she says, “This is not what I thought it was going to be, and I think we should get the Hell out of here or there won’t be any place to go back to.”
That’s not necessarily planted in the ground at the tail end of the third act, but I knew that’s kind of where we should go, because if we’ve opened up this door -- which I hope we have because I certainly would like to do another one – I’d love to explore where the hell [Dr. Shaw] goes next and what does she do when she gets there, because if it is paradise, paradise can not be what you think it is. Paradise has a connotation of being extremely sinister and ominous.
Fandango: We’re not going to get a slow build in this second film, then. These guys are volatile from the start?
RS: In a funny kind of way, if you look at the Engineers, they’re tall and elegant … they are dark angels. If you look at [John Milton’s] Paradise Lost, the guys who have the best time in the story are the dark angels, not God. He goes to all the best nightclubs, he’s better looking, and he gets all of the birds. [Laughs] 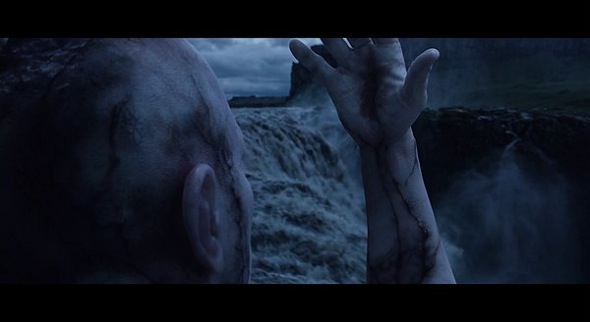 Fandango: So Milton was one of your influences for the Engineers?
RS: That’s sounds incredibly pretentiously intellectual. But in a funny sort of way, yes. I started off with a title called Paradise. Either rightly or wrongly, we thought that was telling the audience too much. But then with Prometheus – which I thought was bloody well intellectual – that wasn’t my idea. It was Fox’s notion, It came from Tom Rothman, who’s a smart fellow. The more I thought about it, the more I thought it was a good idea. This is about someone who dares and is horribly punished. And besides, do you know something? A little bit of an education at the cinema isn’t such a bad thing.
Fandango: Do you worry that you’ve lost the element of surprise that worked to your advantage with the original Alien? By now, we’ve seen numerous movies in the Alien universe, and like it or not, audiences are coming in with an expectation that deflates tension and suspense. Did you feel the need to pull the audience in to the story in a different fashion this time?
RS: I was hoping I had with the fact that you have a sequence at the beginning of the film that is fundamentally creation. It’s a donation, in the sense that the weight and the construction of the DNA of those aliens is way beyond what we can possibly imagine …
Fandango: That is our planet, right?
RS: No, it doesn’t have to be. That could be anywhere. That could be a planet anywhere. All he’s doing is acting as a gardener in space. And the plant life, in fact, is the disintegration of himself.
If you parallel that idea with other sacrificial elements in history – which are clearly illustrated with the Mayans and the Incas – he would live for one year as a prince, and at the end of that year, he would be taken and donated to the gods in hopes of improving what might happen next year, be it with crops or weather, etcetera.
I always think about how often we attribute what has happened to either our invention or memory. A lot of ideas evolve from past histories, but when you look so far back, you wonder, Really? Is there really a connection there?”
Then when I jump back, and you put yourself in a situation of a cave painting, you see that someone 32,000 years ago is showing me a little man sitting in the darkness, using a candle light that is fat from a creature he killed and ate. And in the darkness are two or three other family members whose body heat is warming the cave. But he has discovered that from a piece of this black, burnt stick, he has discovered that he can draw pictures on the wall.
In essence, you have the first level of emotion and a demonstration of entertainment, right? Because he’s drawing brilliantly on the God damn wall. Now, you put yourself into that context, it’s 100-times bigger than Edison. And people don’t go back to the basics and ask, “Holy shit, what gave him that knowledge, that jolt to not scribble on the wall but draw on it brilliantly?”
If you go back and look, a completely underrated film is Quest for Fire. That was one of the most genius, simplistic but incredibly sophisticated notion of what it was. The evolution of that was just fantastic. And that got me sitting back on my ass thinking, “Damn! What a fundamentally massive idea.” 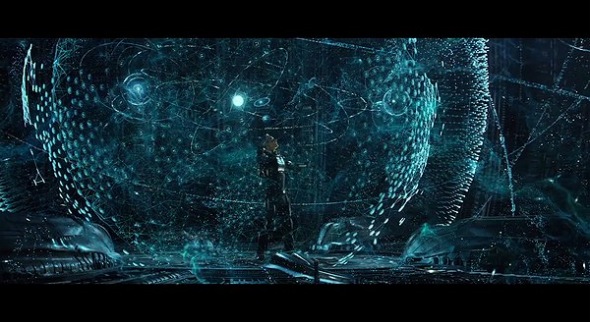 Fandango: You throw religion and spirituality into the equation for Prometheus, though, and it almost acts as a hand grenade. We had heard it was scripted that the Engineers were targeting our planet for destruction because we had crucified one of their representatives, and that Jesus Christ might have been an alien. Was that ever considered?
RS: We definitely did, and then we thought it was a little too on the nose. But if you look at it as an “our children are misbehaving down there” scenario, there are moments where it looks like we’ve gone out of control, running around with armor and skirts, which of course would be the Roman Empire. And they were given a long run. A thousand years before their disintegration actually started to happen. And you can say, “Lets’ send down one more of our emissaries to see if he can stop it. Guess what? They crucified him.
Blog post courtesy of Movies.com. Follow along @Moviesdotcom and @SeanOconnell
Like it? Share it: