Exclusive Interview: James Franco Is the Man Behind the Curtain in 'Oz The Great and Powerful'

Director Sam Raimi and Disney hope you want to know more about the man behind the curtain in Oz The Great and Powerful, a prequel to the beloved 1939 classic The Wizard of Oz. James Franco plays the traveling magician from Kansas who gets swept away in a tornado to the land of Oz, where he lands smack in the middle of a feud between a wicked witch (Rachel Weisz) and a good witch, Glinda (Michelle Williams), who protects the people of Oz. As Franco follows the yellow brick road, he meets a flying monkey, a talking porcelain doll and some singing Munchkins… oh my!

Franco has worked with Raimi more than any other director, having played Harry Osborn in Raimi's Spider-Man trilogy, so he is with familiar company in Oz The Great and Powerful. We sat down with the wonderful wizard—who is also an Oscar-nominated actor for his role in 127 Hours—to chat about Raimi, magic, interacting with CG flying monkeys, and his connection with Playboy and Hugh Hefner. Fandango: This is the fourth time you've worked with Sam Raimi. Describe your relationship offscreen and on-screen.

James Franco: Sam and I are very good friends. I've known him for 11 years. He's seen me grow as an actor and as a person. He is just one of the most fun directors to work with. That's no small thing. It allows everyone to feel comfortable to try things and contribute. It makes everyone want to give his or her best. I would say he's one of my closest friends.

Fandango: You have read all 14 books in the Oz series. Is the Wizard's backstory ever detailed in any of them?

Franco: It is. There's a book called Dorothy and the Wizard in Oz—it's the fourth book in the series—and Dorothy and the wizard return to Oz. You don't see the wizard's backstory in real time like in our movie, although he does talk about some of his history. It's different than what is shown [in Oz The Great and Powerful], but just the fact that the wizard talked about his history sparked the idea in producer Joe Roth: "You know what I'd like to see? How that guy behind the curtain got to Oz and got in the position." You never hear about in the '39 movie—he's just there. That was the spark for this movie. 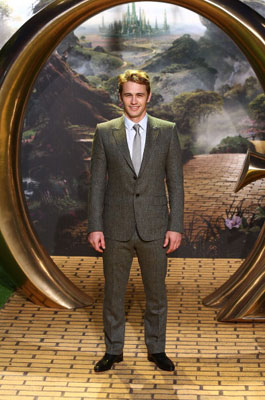 Fandango: Oz is a con man—an illusionist—who makes people believe that he can do things that he really can't. In real life, what is something people assume you are great at that you're really not?

Franco: People assume that this public persona that I have—when people say, "Oh, you're James Franco," like that means something—I feel like, yeah, I'm James and I'm this guy who's an actor, but whatever "James Franco" entails… I just don't identify with that.

Fandango: Did you have to learn a lot of actual magic tricks to play Oz?

Franco: Well, in the movie, Oz puts on a show in Kansas where he makes a woman levitate and then disappear, so I had to learn all the little bits of that. I learned from a great magician named Lance Burton, and he taught me other tricks that didn't make it into the movie for time reasons. But he taught me how to carry myself onstage as a magician.

Fandango: There is a lot of CG in Oz: The Great and Powerful. What extra challenges does that present to you as an actor?

Franco: I had the most scenes with Finley the flying monkey [Zach Braff] and the porcelain girl called the China Girl played by Joey King. Zach and Joey would decide where the characters would go, like they would if they were playing human characters. Then, early on, we'd do several takes where Zach would stand in so I could be interacting with him. Often he would wear blue pajamas so artists could paint him out if they wanted to and use those takes and paint in the monkey. For Joey's character, there was a puppet that was manipulated masterfully by this puppeteer. Both the puppeteer and I would hear Joey's voice in our ears, and he would make the puppet move according to what Joey was saying. It was so convincing that sometimes, when Sam wanted Joey to do something differently, he'd talk directly to the puppet. She took on a life of her own. 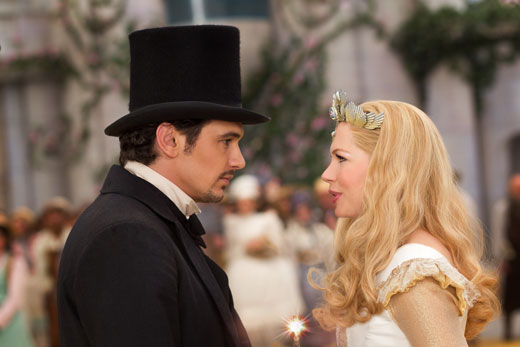 Fandango: Oz and Glinda seem to have a romantic connection that really wasn't hinted at in the original The Wizard of Oz. What do you think happened to their romance?

Franco: [Laughs] What did happen? I guess maybe we'll see in the sequel!

Fandango: You write a regular column for Playboy. What is your connection with the men's magazine and would you like to do more writing and interviewing beyond Playboy?

Franco: I love interviewing people. It's a great gig with Playboy. I get to do an interview a month, and I got a great interview with Sam Raimi. It's great because I get to talk to people that I'm interested in. Sometimes I get to talk to people I worked with, like Sam, but really go in depth with them and ask them things I didn't get a chance to while working with them. That's how the gig started. My manager saw that it was something that I liked to do and thought I was good at it, so he just suggested that I do it.

Fandango: Coincidentally, you're playing Hugh Hefner in the upcoming Lovelace, too. Did you get Hef's blessing?

Franco: That was a favor to the filmmakers—Rob Epstein and Jeffrey Friedman—who directed me in Howl. I play a young version of Hef and I tried to be respectful of him and play him as well as I could. It is a movie about Linda Lovelace, and I think they based some of things on what Linda has said. I don't know if it's a true story, but I am playing a character within a movie, so there are certain dramatic beats that needed to happen. I hope Hef likes the performance—I did my homework and watched old interviews and really tried to get him down. I think he'll like it!