With the first week of August behind us, we take a look back at the week in movie news, rumors, pics, trailers and videos. Check out the week that was and have a great movie-going weekend!

Sissy Spacek received her star on the Hollywood Walk of Fame. Hard to believe the Oscar-winning actress best known for her performance in the 1976 horror classic Carrie didn’t have one already. In case you’re counting, hers is star number 2,443.

-     AMC Theaters and Regal Cinema dropped Electric Daisy Carnival from their screening schedule citing the melee that broke out in Hollywood during a screening that preceding Friday. The movie is still     scheduled to open nationwide August 4th.

-     As you no doubt know -- since fans have been peppering the Internet with all kinds of pictures and videos of it -- The Dark Knight Rises has been filming in the streets of Pittsburgh.  Well it appears one aspiring PA man thought it was a genius move to use the fervor of the filming to cover up a few crimes. And he might have gotten away with it if it weren't for those pesky Pittsburgh police offers. Read the full story over on Movies.com.
-     Reese Witherspoon signed on to star in Disney’s 2013 comedy-drama Wish List, which tells the story of a thirty-something career woman whose life changes when a coin she threw in a magic fountain as a girl finally reaches the bottom. What was this fountain spewing, molasses?
-     Chuck Norris and John Travolta have signed on to kick some butt in Expendables 2.
-     Jennifer Lopez will return to judge contestants on American Idol… for a paycheck of about $20 million.
-     Jordan’s King Abdullah II is such a huge Star Trek fan that he’s currently attempting to secure $1.5 billion to build a Star Trek theme park near the coastal town of Aqaba. 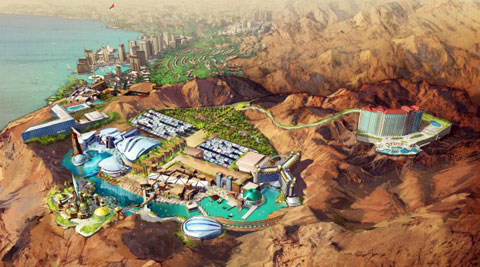 -     A new Friday Night Lights movie is in the works based on the TV show which was originally adapted from the 2004 Billy Bob Thornton movie.
-     The ‘net flew into a rage when news (and a pic) of the new Spider-Man was revealed on Tuesday.
-     You can say hello to Scarface on August 31st as Fathom Events announced a one-night special screening of the 1983 Al Pacino gangster flick.
-     Twitch Film reports that Piranha 3D director Alex Aja met with Paramount and is set to direct a remake of Pet Sematary. Recently, Aja also announced he was developing a Scanners television series.
-     In celebration of The Big Lebowski Limited Edition Blu-Ray debuting on Aug. 16, the cast of the cult favorite are re-uniting in New York.
-     Laurence Fishburne joined the cast of Zack Snyder’s Man of Steel Superman movie as Perry White.
-     Sigh of relief guys. Len Wiseman confirms that the three-breasted woman will return in the Total Recall remake.
-     Fresh off the heat generated from Midnight in Paris, his most successful movie ever (if success is measured in dollars at the box office), Woody Allen took time to critique his earlier works, saying Annie Hall was OK and that he really didn’t like Manhattan.
-     A list of movies that Steven Spielberg requires people to watch before he works with them hit the ‘net and gave birth to something called The Spielberg Number, which is just a cooler way of saying how many of the movies on his list you’ve seen.
-     Blockbuster Express members can use five promo codes for free rentals. The promotion ends August 8th.
-     On a sad note, ex-NFL player and Police Academy star Bubba Smith was found dead at his home on Wednesday. He was 66.
-     In even more sad news, the tree from Shawshank Redemption was ripped in half by heavy winds.
-     Following the much-ridiculed release of the Battleship trailer (which you can watch in the Trailer section below), Universal dropped the movie adaptation of the board game Clue, which now joins Magic: The Gathering and Monopoly as board game movies looking for a studio.
-     While Relativity and Universal go back and forth with their competing Snow White movies, Disney announced that their live-action adaptation landed a director and also changed the title to The Order of Seven.
-     The Toronto Film Festival announced their Midnight Madness line-up. Movies.com breaks down the Top 5 to Check Out.
-     In the latest news controversy over movie texting, Brenda Godwin was fined $260 and charged with assault after she allegedly tapped the shoulder of Dale Fout who was sitting in front of her and texting during a movie. The 220-pound Fout describes himself as, “a pretty big guy. I’m broad, not fat. I used to play football.” Godwin says she is a 136-pound skin care specialist. You can read both sides of their story here.
-     John McClane and his yet-to-be-cast son look to be headed to Moscow in Die Hard 5. How do you say Yippie-kai-yay in Russian?
Rumors

-     Now that we know that Samuel L. Jackson is set to produce a live-action version of Afro Samurai, the R-rated cult anime for which he provided the voice for, the question is now who can pull off that role. GeekTyrant has nominated Donald Glover, who currently plays Troy Barnes on the NBC sitcom Community. He certainly has the look and is a fresh face to the film scene. What do you think?

-     Of course the picture making the biggest waves this week was the first look at Henry Cavill as Superman. Movies.com breaks down Five Important Things About the New Pic. 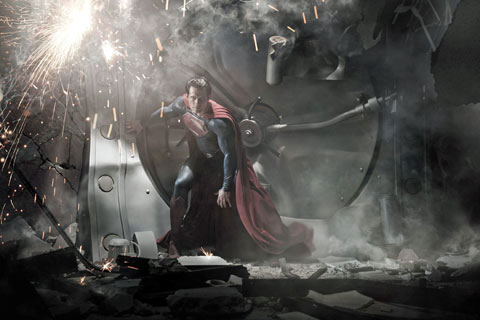 -     Today, we got our first look at Anne Hathaway as Selina Kyle/Catwoman in Dark Knight Rises. Jump on over to Movies.com for yet another pic of Hathaway (or perhaps her stunt double). 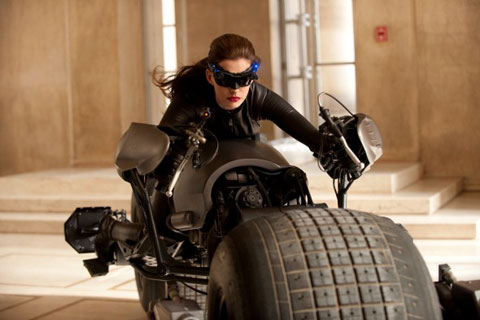 -     Not to be outdone, Universal just released a first look at Rihanna in Battleship. 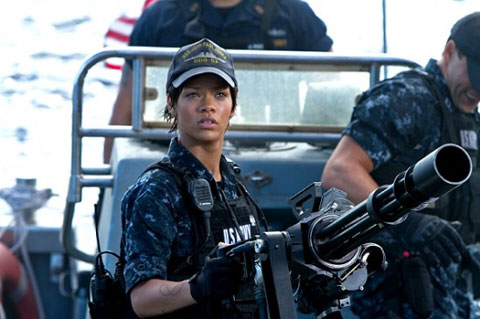 -     IGN created this handy little graphic cheat sheet for those who haven’t seen any of the previous Planet of the Apes movies, but will be venturing out to theaters this weekend to check out Rise of the Planet of the Apes. Click image for larger (readable) version. 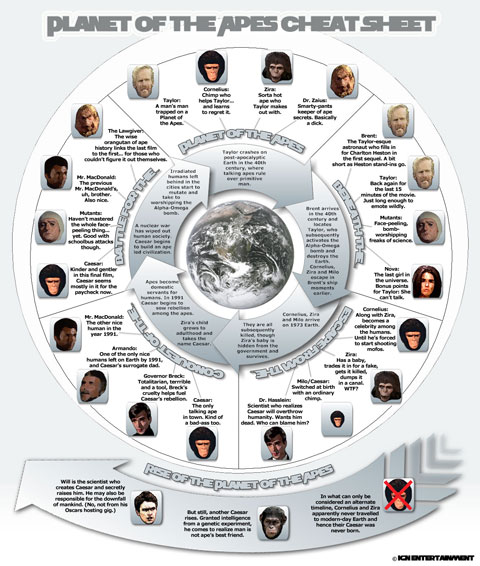 -     New images from Emma Watson’s Lancome shoot cast a spell on Potterheads. You can view the full gallery here. 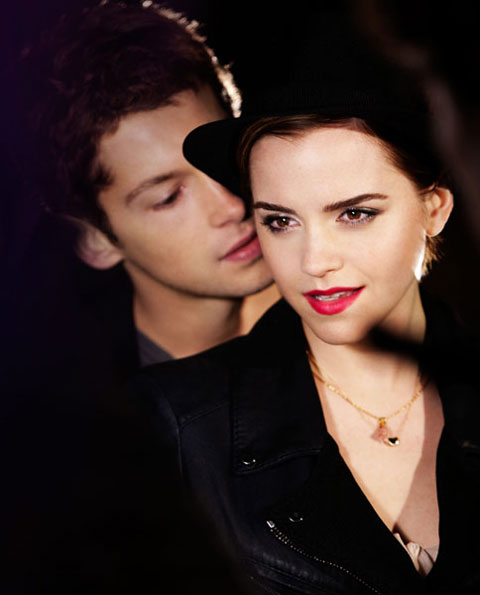 -     Ever wondered just how many people have fallen victim to Jason Voorhees? Well, this nifty chart answers that question. Click image for larger version. 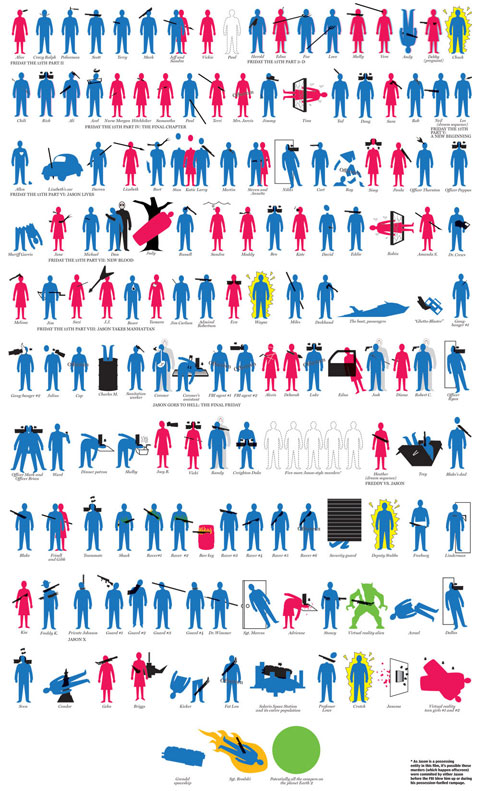 Trailers
-     Taylor Kitsch keeps his cool while Brooklyn Decker lies on top of him, gets scolded by Liam Neeson and faces off against a massive Michael Bay-esque alien in the first Battleship trailer which premiered July 27th but we post since there's a ton of Battleship content in this recap.
-     Cloverfield + Skyline x Russia + invisible aliens = the first trailer for the Emile Hirsch-Olivia Thirlby horror-thriller The Darkest Hour.
-     If you thought the first trailer for Tinker Tailor Soldier Spy was awesome, check out the second trailer released this week.
-     A new trailer for Killer Elite hit the net and finds Jason Statham rescuing Robert De Niro amid a sea of clichés.
-     A second trailer for the Brad Pitt baseball drama Moneyball hit the web featuring the same dialogue from the first version with a few new shots mixed in.
Videos
-     Matt Damon spent the previous weekend in Washington, D.C. as the keynote speaker for the Save Our Schools March. Watch the video below which has turned the Bourne trilogy actor into the conservative’s whipping boy this week.

-     Did you watch the trailer for the Jason Bateman-Ryan Reynolds comedy The Change-Up and think, “Wow, that reminds me of Freaky Friday”? This mash-up from Hulu proves you weren’t that far off.
-     Ever wonder what a heavy metal version of the Harry Potter theme song would sound like? Eric Calderone, decked out in a Ghostbusters shirt, posted his latest shred-tastic video. You can check out his much-loved Star Wars meets Metal clip here.
-     Hitting the web today is this awesome Street Fighter stop action short shot on a Nikon D5100 camera. Watch Ryu vs. Ken in a best-of-three smackdown!
Like it? Share it: 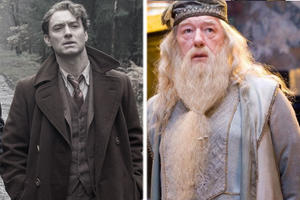 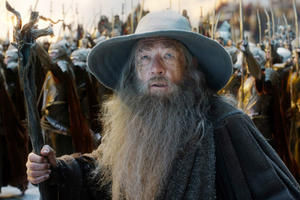 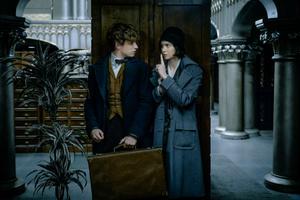