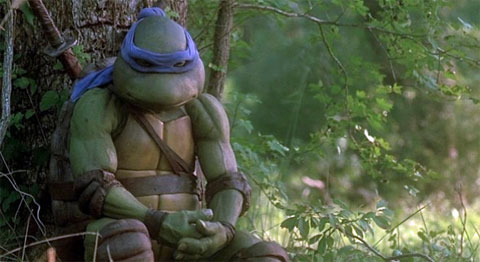 From Leatherface to Leatherhead?

That was totally necessary, but you can be sure that the Michael Bay-produced Teenage Mutant Ninja Turtles reboot will not feature that mutant alligator baby-eater -- if only because he's too much like the Spider-Man reboot's Lizard villain -- despite how perfect the headline would fit now that Jonathan Liebesman, of The Texas Chainsaw Massacre: The Beginning could be at the helm. Anyway even if this rebooted franchise indeed goes slightly darker, more in tune with the original Eastman & Laird comics, a kid-killing villain is probably still a bit much.

Personally if I had my way the next TMNT movie would be black and white and include cameos from Usagi Yojimbo and, just for the hell of it, Boris the Bear, who would show up and slaughter everyone before promising his own spin-off film series. But I was a fan of everything from the Mirage Comics to the Archie Comics to the cartoon to the toys, so give me Ace Duck I don't care. I just imagine it will be just like the Smurfs movie, which really honestly wasn't that terrible. Other ideas I have include bringing Vanilla Ice back to play Rat King and having Skrillex be this era's on-screen soundtrack presence, only the dubstep DJ will be potrayed by the returning Corey Feldman.

The fun thing about conceiving rebooted TMNT ideas is you can't get any more ridiculous than the initial concept of the whole property. 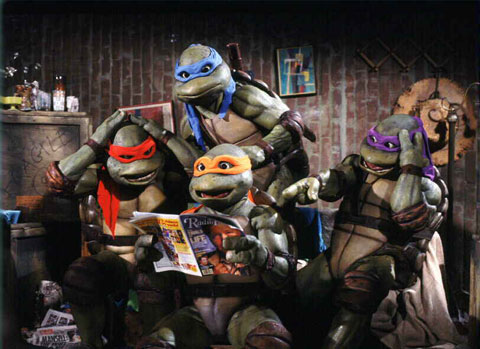 What are people suggesting or hoping for the Teenage Mutant Ninja Turtles reboot? Here's The Conversation heard around the Internet:

As befitting a story that has likely been slashed and stitched together several times by now, the plot details of their script are still being “kept under wraps”—except, obviously, for the fact that it will concern turtles that mutate into teenage ninjas, and that it will be a “new reimagining” of that concept, such as now they also use cell phones. - Sean O'Neal, A.V. Club

For now, [Liebesman's] experience of working with lots of special effects wrapped around live action gives a broad hint as to just what Paramount may have been looking for. CG Turtles for definite, then…? - Simon Brew, Den of Geek

Keep It Lo-Fi: The original live action adaptations of the Turtles cartoon and comics worked because of the movie magic from Jim Henson's Creature Shop. The green suits and animatronic heads might not get a pass by today's standards, but the idea behind them still stands. The Turtles in the first three movies were physical and tangible. The original report in Variety about Liebesman coming aboard didn't mention how the Turtles will appear, but CGI characters in a live-action setting is the assumption. With this solution, you lose believability in one of the film's main aspects. - Kevin P. Sullivan, Splash Page

Henson had apparently said that his work on TMNT was some of the most advanced work of his career. And now, with everything in Hollywood that has happened in over 20 years of technological development in special effects, there will be more live-action turtles requiring more realistic-looking magic. One rumor going around is that the Turtles will be computer animated and incorporated into live-action footage, similar to Rise of the Planet of the Apes and Pirates of the Carribbean. And when you think about how amazing those beasties looked when featured with human actors, it’s hard (for me, at least) not to get excited about seeing some awesome-looking Ninja Turtles in the movies again. - Jamie Frevele, The Mary Sue

The reported plan for Liebesman's reboot is to return the franchise to its live-action roots, though prior updates claimed the Turtles themselves would no longer be puppets but rendered in CGI, like the Rise of the Planet of the Apes apes, or those chipmunks we like so much. Hopefully that's remains the case; Andy Serkis is always looking for a reason to slip into some sensor-covered spandex - Mark, I Watch Stuff

The developing live-action movie has been said to be going back to the grittier roots that appeared in the comics. [...] With gritty reboots actually turning out pretty well, I could see this new TMNT movie being somewhat a combination of Batman Begins with Rise of the Planet of the Apes. - Mike Lee, Fused Film

The new TMNT flick could feasibly pick up with more experienced versions of the superhero characters than those featured in the original 1990 live-action movie – i.e., more of a “rebooting sequel” along the lines of this week’s Ghost Rider: Spirit of Vengeance or the upcoming Liebesman-directed Wrath of the Titans. Liebesman’s being hired on would make all the more sense, if that’s the case. - Sandy Schaefer, Screen Rant

if they can reinvent TMNT on the level of, say, Bay’s Transformers… well, that sounds like a blast. - Brendan Bettinger, Collider

Whoever takes on the Turtles must understand that exploring the relationship between battling brothers Leonardo, Raphael, Michelangelo and Donatello is more important to the film's success than set-pieces and action sequences. We need to see contemporary iterations of the characters that also stay true to the heart of what they stand for, otherwise the new TMNT film will be just another rehash of a nostalgic brand. - Daniel Hubschman, Hollywood.com

Rest assured we’ll be seeing some familiar faces.  The turtles enigmatic sensei Splinter is sure to feature as is the evil Shredder, head of the foot clan.  Whether we get to see some of the more outlandish turtles characters, Rock-steady, Be-Bop and evil war-lord Krang come on down, remains to be seen, but with a whole universe of bad guys out there we’re sure to be in for a treat. - Steve Willingham, Filmoria

I’ve heard a few things. Expect the Foot to be in the film, along with Casey Jones and April O’Neil as a sort of protagonist duo. And we should see a Rise of the Planet of the Apes sort of approach to creating the Turtles — they’re most likely to be CGI characters inserted into live-action footage. Whether they’ll be played by actors in a performance capture setting is yet to be confirmed. - Russ Fischer, /Film

In theory, I’m not against a Teenage Mutant Ninja Turtles reboot. I wouldn’t even mind seeing a slightly darker take on the characters drawing more from the comics than the cartoon. However, after seeing the pure emptiness of Battle: Los Angeles, I don’t have much hope for this anymore. Liebesman also directed The Texas Chainsaw Massacre: The Beginning, Darkness Falls and The Killing Room… in other words, prepare to have all the fun sucked right out of the Turtles! - Sean Dwyer, Film Junk

We’re also hoping it could get back to the more grown-up original comic books, but we doubt the studio will want to risk a wide audience… - James White, Empire

People who are holding out for a gritty, bloody samurai movie with a cursing Raphael and what have you are likely to be severely disappointed. And, you know what? That’s okay. A little Turtle fun is a good thing. Just as long as we don’t bring in Krang or the Neutrinos, I’ll be fine. And is it too early to start campaigning for them to bring back Elias Koteas as Casey Jones again? He is Casey Jones to me, to the point where I get upset seeing him do other things. - Nathan Adams, Film School Rejects

It should still star Elias Koteas as Casey Jones. - @mattsinger

The film will be produced by Michael Bay, who teamed with Liebesman when the latter directed 2006's The Texas Chainsaw Massacre: The Beginning. Just spitballing here, but if the Ninja Turtles are somehow able to duel Leatherface, that'll be worth seeing. - Zach Dionne, Vulture

I’m guessing that “plot details are being kept under wraps” is code for “we haven’t sent our blindfolded monkey out into the minefield marked with plot point flags yet” but I thought I’d lend a hand and offer some free plot ideas… TV reporter April O’Neil (Kate Upton) is chilling in her Manhattan penthouse that her CEO boyfriend (Gene Simmons) pays for while he buys and destroys companies from his private fighter jet. Looking for her next big story, O’Neil hits the streets, but one of her expensive diamond earrings falls into a sewer. In a sheer white tank top, she enters the sewer to find it, and she is greeted by a talking rat named Splinter (voiced by Gilbert Gottfried). He introduces O’Neil to his four Teenage Mutant Ninja Turtles (voiced by Justin Bieber, Zac Efron, Boo Boo Stewart and Tracy Morgan). Then Shredder (The Rock) and Krang (Danny DeVito) show up and they’re like, “Suck it, fags” and a bunch of sh*t blows up. The End. - Burnsy, Film Drunk

And what are Fandango fans saying on our Facebook page? Take a look: 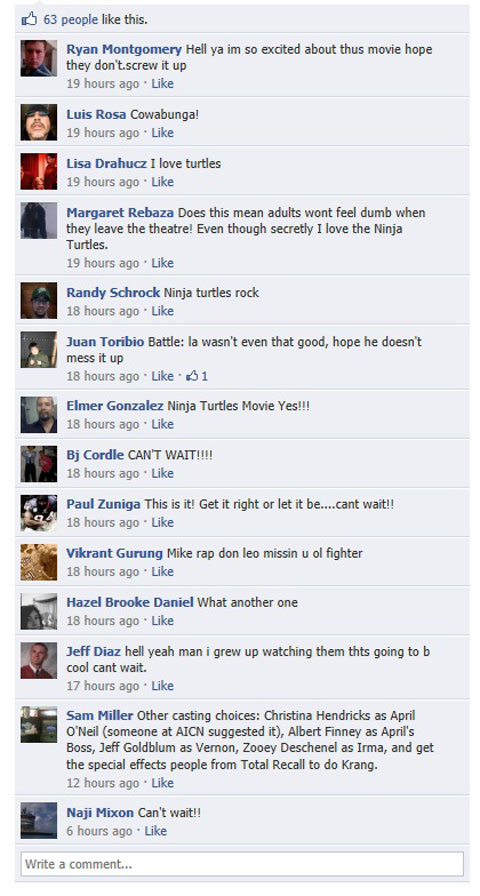 You can join in on more Conversations over on Movies.com and also follow Christopher Campbell on Twitter!

Alamo Drafthouse Guide (2/16-2/22): The Drafthouse Invite You to Spend Fat Tuesday with Peggy Sue, a Vigilante and William Shakespeare

Alamo Drafthouse Guide (2/16-2/22): The Drafthouse Invite You to Spend Fat Tuesday with Peggy Sue, a Vigilante and William Shakespeare