Prior to 2011’s Thor, most American moviegoers only knew British actor Tom Hiddleston as the guy who would be starring opposite some other guy named Chris Hemsworth. But 12 months later, Hiddleston has become just as much of a sensation as his co-star by creating a villain so formidable that one superhuman sibling is no longer enough to stop him; instead, it requires the formation of a team of superheroes. In The Avengers, Hiddleston reprises his role as Loki, the Norse god of trickery, and he squares off against a remarkable cast of talented actors, as if proving in just two films that he’s ready to share the screen with anyone Hollywood wants to throw at him.

Fandango sat down recently with Hiddleston at the Los Angeles press day for The Avengers. In addition to discussing the prospect of pushing his character forward after Thor, he addressed where Loki might go in Thor 2, and examined the similarities between roles in huge blockbusters like this one and those in the smaller films that will get bankrolled because of it.

Fandango: After the theatricality of the world of gods in Thor, do you have to make a lot of adjustments when he’s introduced into a more mundane setting? Or is it just a matter of putting him in a different context?

Hiddleston: The thing about playing gods, whether you’re playing Thor and Loki or Greco Roman gods or Indian gods or characters in any mythology, the reason that gods were invented was because they were basically larger versions of ourselves. They experienced the same feelings of pride and jealousy and anger, and also the good stuff -- love and generosity -- and the extremity of virtue and the extremity of vice.

So I guess there is an instinctive readjustment in a way, but part of what makes the film thrilling is that both Thor and Loki are fish out of water, and both of them are the butt of many of the jokes because they’re so ridiculous. There is a bit where Black Widow to Captain America says, “Don’t go after them. They’re kind of like immortals. They think of themselves, they’re basically gods.” And Chris says, “There is only one god, ma’am, and I'm pretty sure he doesn’t dress like that.” It’s a joke. I hope that you believe in Loki as a threat, and as a kind of really damaged, twisted soul. 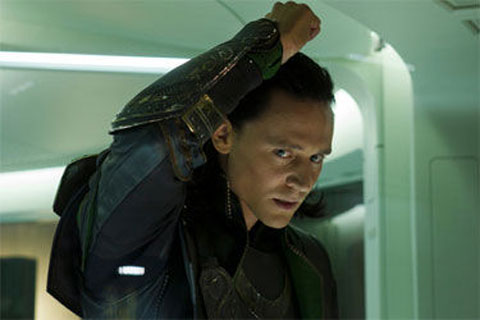 Fandango: When you have to interject the humor into him that Joss put into the entire script, how tough is it to include that, and yet not undermine the seriousness of the stakes?

I hope that the scene between the two of us on the mountaintop is actually really deeply felt, and then Downey comes in and then calls it “Shakespeare in the park,” which is a great line and we can allow the audience to laugh at it retrospectively. But also you’ve been watching a scene which is like really deeply felt between two brothers -- I hope.

Fandango: How much do you have to think about the pre-established mythology, because the end of Thor and this movie don’t quite exactly link up?  Were there things that connect those dots that didn’t make it into the movie?

Hiddleston: Well yeah, I think so. The back story for us was that when Loki lets go of that spear at the end of Thor he is doing it both literally and metaphorically, he’s letting go of his affection for Asgard -- his connection to it, his need for Odin’s love, and he disappears into the wormhole. The audience thinks is he dead, but where he’s gone is he’s sort of been to the seventh circle of hell and back and along the way has met these aliens and made a shady deal with them and they’ve found the Tesseract.

Loki was brought up with the expectation of entitlement -- he was born to rule, both Thor and Loki were born to be kings. And yet, there is no kingdom for Loki, so he has to find one. So he’s come down to earth to subjugate humanity and rule the human race as their king. I guess we’ve skirted over the facts of where Loki disappeared to, but we’ve imagined that he’s had a pretty horrible time and this is his kind of last chance at giving himself an identity or a home, somewhere to belong to.

Fandango: How do you reconcile the grandiosity of his ambition versus his actual ability to execute that?

Hiddleston: I think he’s really, really bright -- he’s very, very intelligent. He’s an immaculate tactician. He plays people perfectly and he’s an absolute kind of chess master. However, he is completely without self-knowledge and in a way he bears comparison with all of the autocratic fascists in the course of human history. I mean, that’s the reason he’ll never win, because he’s motivated by hate and the haters never win. I just think that’s true about life, because negative energy always costs in the end.

Fandango: There is a perception, fairly or unfairly, that like actors like yourself do a commercial movie like this so that you can go do meaningful independent projects. How do you ensure that it is as meaningful and empowering as anything else?

Hiddleston: Well, it’s the same job. Our job is to represent the truth of human nature, whether you’re playing a tender love story that’s set in a coffee shop or whether you’re in The Avengers, which is set in a Manhattan which is exploding. Your job as an actor is to bring as much truthfulness and honesty and humanity to the characters and to the story that you can. And what I love about what every single actor has done in this is it just feels like they’re really good performances; never mind that the spectacle and the visual effects are breathtaking.

I think that the attitudes have changed as well. Somebody told me once that when Christopher Reeve was cast as Superman he was known as one of the most promising classical theater actors of his generation. He was mocked and laughed at by his peers, but since then actors like Robert Downey Jr. and Heath Ledger and Christian Bale and Jack Nicholson, Ian McKellen and Patrick Stewart in X-Men and Michael Fassbender and James McAvoy…suddenly the business of superheroes has become seriously dramatic and dramatically serious.

Fandango: Loki has been such a formidable adversary in two movies, but with Thor 2 coming, can he be the same villain a third time?

Hiddleston: I think he has to evolve, but I also think I'm different in this than how I was in Thor. Who Loki is in Thor 2 has to move forward with The Avengers as a springboard, so you know. I promise you I haven’t seen the script, so the question for me is, is there a glimmer of redemption? Can he be forgiven by Thor? Can he forgive himself? What will convince him to stand by Thor’s side as his brother again? Is it possible -- and if it’s possible, will it stay that way or will there be some other transgression, some other re-offense that will send him back into the Asgardian jail, whatever it is?

I'm fascinated by it, and it seems like in the Norse myths and in the comics, there is this constant inconstancy in Loki that he’s crossing that line all the time -- that’s why he’s the god of mischief. So I'm excited to see what happens if you play with his vulnerability a bit more, to find a way to bring him back [after] he’s been really evil and he can sort of come back to the good side. But I don’t know -- we’ll see.

New on DVD: 'Haywire' (Plus Giveaway!)

New on DVD: 'Haywire' (Plus Giveaway!)