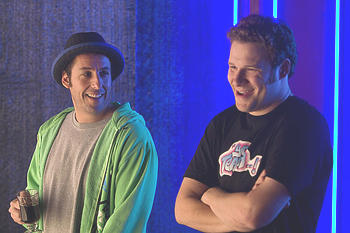 When death is staring you in the face, why not joke about it? Laughter is the best medicine in Funny People, whose "funny" comes largely by way of the macabre. Adam Sandler stars as George, a big-time comedian who finds himself isolated (and spoiled) by his fame, even more so when he's diagnosed with a rare and fatal disease. Things take a turn for the better when he overcomes the disease and gets a second chance to make things right with his past, taking his assistant and aspiring comic Ira (Seth Rogen) along for the ride. 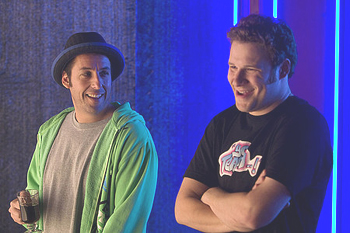 Sandler brings a perfect balance to George, who may be entrapped by both fame and his illness in the weird and impersonal world of megastardom, but he's still...well, really funny. The film's many cameos are also great. Extras: Deleted/gag scenes, commentary with director Judd Apatow and the stars, early archival footage of the stars, much more.

Think you're one of comedy's next funny people? In conjunction with the movie's release, ijoke.com is holding a contest that'll give you a chance to perform onstage at the Improv at Harrah's Las Vegas. Submit a video of your funniest material at http://www.ijoke.tv/video/upload and select "Funny People Contest."

Angels & Demons Dan Brown's movies seem to suffer in translation to the big screen, and though this second adaptation is better than The Da Vinci Code, it's not by much. At least nobody's trying to make a point -- just go with the ludicrous plot.

Four Christmases Happily unmarried Brad (Vince Vaughn) and Kate (Reese Witherspoon) wisely avoid Christmas with their families like the plague. This year though, they're stuck visiting four sets of families in 24 hours.

Shorts When a wish-granting rock falls from the sky, the town of Black Falls finds that sometimes what you wish for isn't always the best thing for you as they become overrun with spaceships, aliens, crocodiles and giant boogers. Yep, pretty much just for the kiddies.