You may think this is just another picture of Leonardo DiCaprio hanging around, looking suave (and maybe it is), but it’s also a pic of Leo on the set of his new movie, J. Edgar, in which he plays legendary law man J. Edgar Hoover. 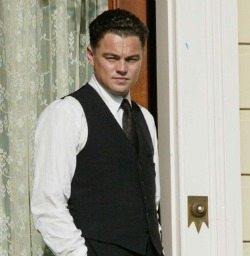 These aren’t official photos from the set, but they were taken during production as Leo stepped out for a smoke. The film, which is being directed by Clint Eastwood, will track Hoover throughout his career highlights with appearances from Naomi Watts (playing Hoover’s secretary Helen Grady), Armie Hammer (Hoover’s right-hand man and possible lover, Clyde Tolson), Ed Westwick (playing Agent Smith, who was hired to write Hoover’s biography) and Josh Lucas (as aviator Charles Lindbergh).
Recently, Hammer said that he and DiCaprio get to do plenty of making out in the movie, which means they’ll definitely be leaning in the direction that Hoover and Tolson were lovers (though neither ever admitted it). Hammer said, "It’s not a kissing scene—it’s a ton of kissing scenes… I’m so excited to work with Clint, and from what I hear, he’s not the type of director who has a ton of rehearsals and takes. I think we’re just sort of thrown in there and have to make it happen."
What do you think of Leo as Hoover? Does he look the part?
Like it? Share it:

Will Smith to Help Justin Bieber Break Into Movies?

Will Smith to Help Justin Bieber Break Into Movies?