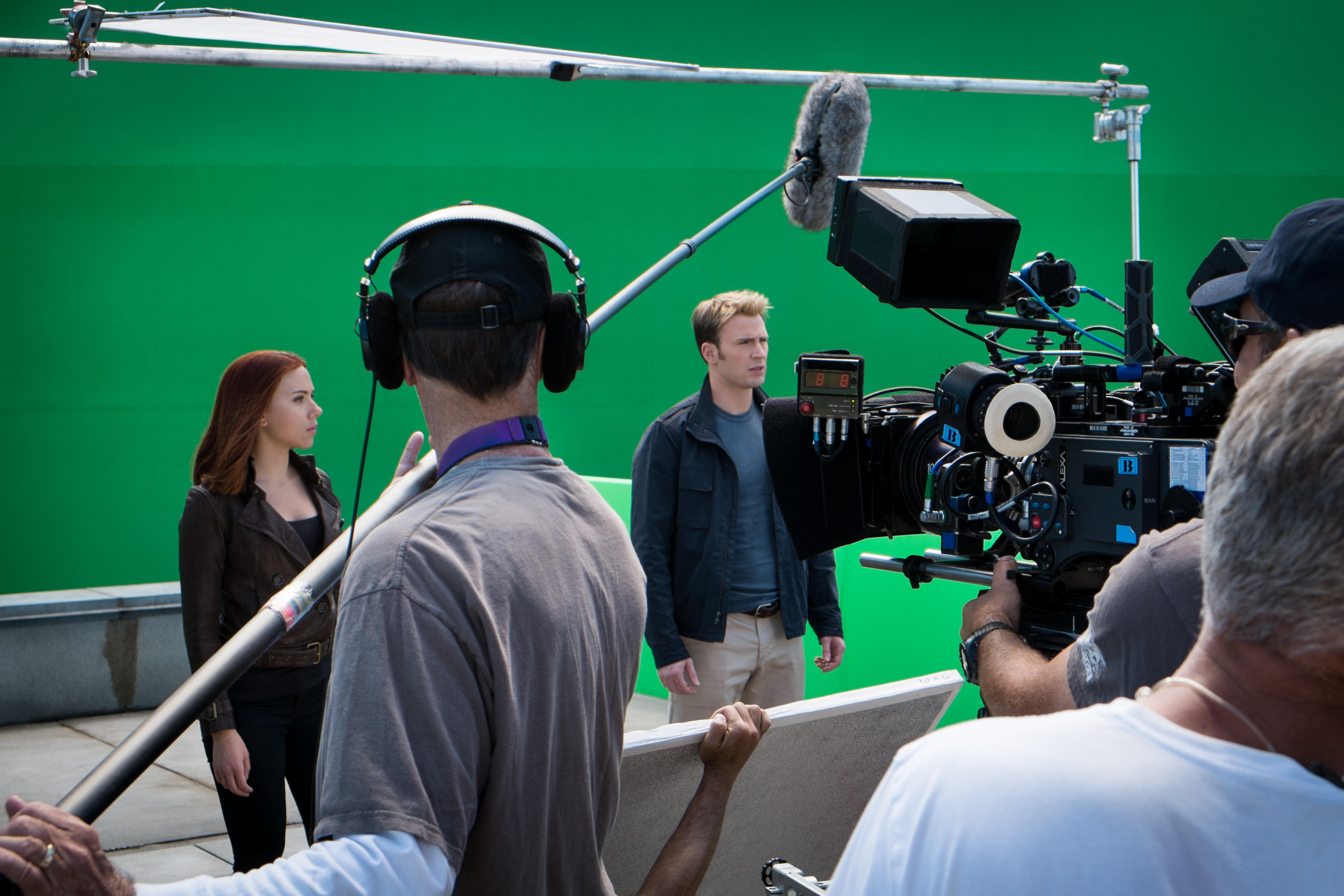 Watching a movie scene being shot isn't always as thrilling as seeing it on-screen, but there was a more electric buzz than usual happening behind the scenes of Captain America: The Winter Soldier during Fandango’s visit to the Marvel Studios soundstages: Chris Evans was bringing focus and gravity to his scenes in a mysterious high-tech chamber, codirecting brothers Joe and Anthony Russo were constantly huddling over how to amp up each moment, and Anthony Mackie (Sam Wilson/The Falcon) kept the cast and crew laughing when the cameras stopped rolling. During a handful of breaks, the Cap team revealed some crucial information about what the star-spangled Avenger will be grappling with in his latest adventure. 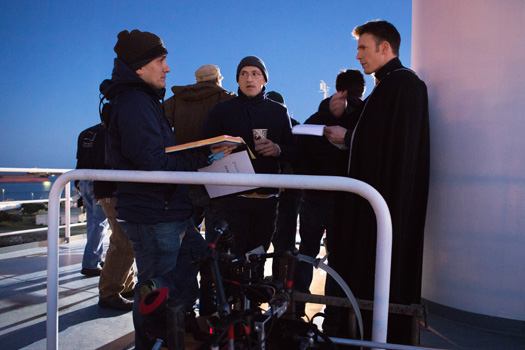 The Russo brothers huddle with Chris Evans to discuss a shot.

Why Winter Soldier is as emotional as Star Wars:

In having to face down his 1940s-era best friend Bucky, revived in the 21st century as the titular mind-controlled cyborg assassin, Joe Russo says, “it's very operatic in its construct because it's talking about your best friend is a villain. One of the first things we said to Kevin Feige is ‘If you're going to do the Winter Soldier story, you've got Star Wars on your hands, because so rarely do you every have a hero who has an emotional connection—that kind of emotional stakes—with his adversary.’ It's almost never. I think that's the genius of [comic book writer Ed] Brubaker's storyline is it's his best friend—his brother, really.”

Cap will be angst-ier than ever:

“This was one of Steve's biggest sources of guilt,” says Chris Evans. “The fact that out of his whole crew of Howling Commandos were these guys that he convinced to come into battle with him, it's the one guy that didn't make it back, and that was the one guy that was always there for him. And then to find out that he did make it and was subject to some of the things he was subject to, that's a lot. That's a lot for Steve to process, and he takes full responsibility for it because he wouldn't do it any other way.”

Even the deadly Winter Soldier comes with his own shades of gray:

“It's such an interesting, heavy and rich kind of character,” says Sebastian Stan, who plays Bucky/the Winter Soldier. “It's never black or white with him. Even when he's quote-unquote brainwashed and whatnot, he's still dealing with the dreams and nightmares, and he doesn't know where it's coming from. It's kind of like taking a really unstable person and putting them in one of the most dangerous weapons, and just going into the world and seeing what happens.”

The film’s action will be the most intense that the Marvel cinematic universe has seen thus far:

“We wanted to bring some style of action that hasn't been seen in American movies in a little while,” says Joe Russo. “A style of fighting and intensity that we really feel -- taking hits, a very visceral execution… There were a lot of bumps and bruises for the stunt guys, a lot of punches thrown, a lot of hits taken, a lot of violent stunts where guys are getting thrown 20 feet into a car window, then having to get up and walk away from it. That's what we were excited about with Cap: you could literally execute this stuff. It's not Iron Man where he lives in a virtual world and most of that fighting is done after the fact.” 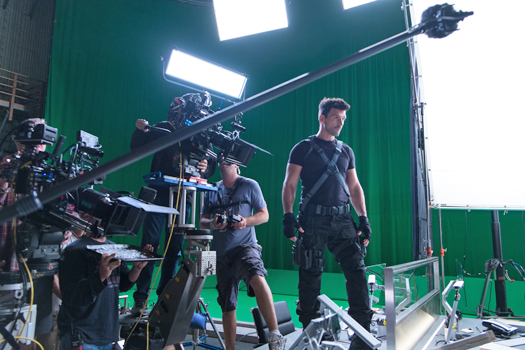 Evans pushed himself to the limit to pull off as much of the over-the-top action himself, rather than via CGI doppelgangers:

“They put me in gymnastic classes, and we were doing combat stuff every day for a few months,” says Evans. “And it's a lot of fun because when you get the dance down – all it is, is just a dance really, the choreography – you start working on the acting. Because you can't telegraph a block or a punch. You have to show if you've been hurt.”

The actor was thrilled with the results. “It just looks so good! We have such good stunt coordinators and choreographers. The Russos really have a handle on how they want to shoot this. Sometimes you watch the stunt guys do a little playback and it looks okay. And then the Russos get in there with these great angles and a lot of great camera movement, and some of the films they even reference in those first meetings of how they wanted fight sequences to look were spot on.” 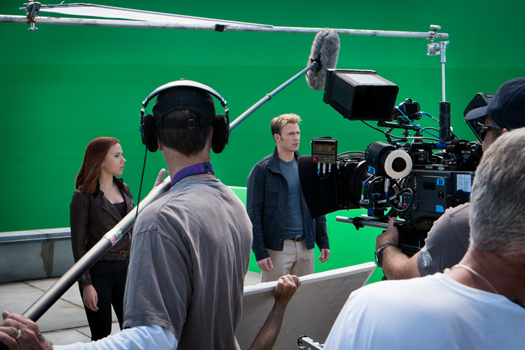 ScarJo and Evans on the set

Sam Wilson, aka the Falcon, will be there to lighten Cap’s existential load – and help him kick butt:

“Cap's coming from a very difficult place,” says Anthony Russo. “He's basically a guy who wakes up in the modern world -- it's maybe a year or two after he's come out of this state, and his whole world is gone. He's a guy who's lost everybody. It's just a very severe emotional, psychological place to be in. And Anthony Mackie just sort of has a wonderful energy that we just thought, if he's going to form a new friendship, he needed somebody like that to pull him into the present.”

Adds Joe Russo: “There's a maturity in the performance, a charm and a sense of humor, that draws Cap out – which is great because it gives him something to play off of that is a different shade, a different tone, then he's played with in the past.”

Anthony Mackie was hoping to play the old-school comic book version of the Falcon, a reformed pusher and pimp, BUT…:

“When I heard they were using the later [version] I'm like, ‘Well, that's not what I signed up for– I want a bird in spandex and prostitutes and cocaine!’ But, you know, that's the Marvel universe… If you look at the Falcon now, he's really a military tactical driven force. He works with Cap not so much out of self-preservation, but more so out of respect and honor, because they both share a common bond within the military… My character is very intrigued, like everyone else is in the movie, by the fact that Captain America is here to save the day, so what seems to be the problem?”

Mackie already knew where a chunk of his paycheck was going:

“My brother was one of those comic book guys and I knew about the Falcon just simply because he was an African-American superhero,” says Mackie. “I was a kid and he wouldn't let me in his room, so I went in his room and destroyed all his comic books. He was happy to think that I would be able to rebuy his comic books for him!”

Now go check out an extended clip from the movie and get advance tickets here!