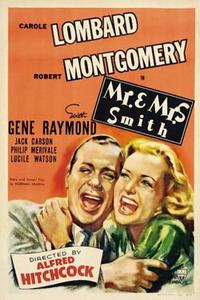 MR. & MRS. SMITH, 1941, Warner Bros., 91 min. Dir. Alfred Hitchcock. Yes, there is a screwball comedy among the Hitchcock oeuvre, and a highly amusing one at that. When Robert Montgomery tells wife Carole Lombard that he wouldn’t marry her again, he soon regrets the joke - it turns out that, due to a technicality, their marriage was never valid, and that friend Gene Raymond has a thing for the suddenly available Lombard. RICH AND STRANGE, 1931, Rialto Pictures, 83 min. Dir. Alfred Hitchcock. Released in America as EAST OF SHANGHAI, this quirky mix of satire and adventure, with vestiges of silent film, is also a rewarding look at marital relationships (and is said to be an early favorite of its director). London couple Fred and Emily Hill (Henry Kendall and Joan Barry) are roused from their humdrum lives by an inheritance from a rich relative, which they use to travel the world - until the now-wealthy couple are tugged apart by the promise of shipboard romances.