February 23rd 2008, 7:27 pm
This from Stacie Hougland, live from WonderCon in San Francisco: The moment Steve Carell and his Get Smart co-star Anne Hathaway and director Peter Segal entered the room, energy in the room turned electric. "Dammit! Sit Down!" Carell joked, as the crowd inside San Fran's Moscone Center hall "A" booed some guy who requested a photo and autograph. 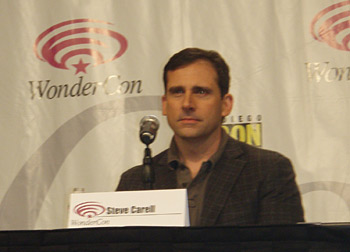 OK, you wouldn't know it from this pic, but the guy's a gas.

I'll admit I was a little on the fence about Get Smart, one of my favorite shows as a kid...I get Carell in the iconic 1960s Don Adams role (he's made a name of himself as the buffoon who always ends up being right somehow on The Office), but Anne Hathaway in Barbara Feldon's elegant heels as sophisticated, intelligent Agent 99? The extended trailer premiere exclusive to WonderCon showed Maxwell Smart meeting KAOS's Conrad Siegfried face-to-face in a hilarious scene; destroying a living room's beaded curtain only to incidentally stop the bad guy; and barreling full-speed on a rope into a wall, quipping, "I missed it by That Much." After seeing it, I'm sold--this casting was spot-on. Anne brings it as Agent 99 in a bobbed-and-banged wig, and Carell is just the right fit for Don Adams' telephone-equipped shoes. What's great is that the film looks pretty true to the series, which director Segal made clear was the point. "We were really mindful of the show's fans, so we kept as many catchphrases and characters as we could," said Segal.

Anne and Steve have scary-great chemistry in the film's trailer.
Epic cave story 10,000 BC is the film soonest to be released that was showcased at the WonderCon convention, and we got to see about three full minutes of footage that explains a lot more than what's going on in the trailer. See, there's this tribe of mammoth hunters who live peacefully off the land until this strange tribe of pyramid-inhabiting invaders kidnaps a bunch of them and their princess, with whom one warrior hunter is in love. The few minutes we saw revealed that these invaders may actually be from some other world; details of the kidnapping of the princess; a couple of incredible battle scenes; and some stunning graphics of the huge wooly mammoths, saber-toothed tigers and any number of large reptiles--basically the Ice Age on steroids. 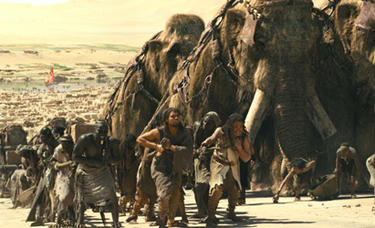 They're justified, and they're ancient...

Director Roland Emmerich (Independence Day) told us his fascination with the Egyptian pyramids and their unknown origins heavily influenced this film. "I was sorry to see Hollywood doing the same thing all the time. I wanted to do something different," said the director. "I wanted to go to the past to try to explain today." For Steven Strait and Camilla Belle, who play the hunter and princess, respectively, the biggest challenges were not in the physical, but imagining themselves back in time. "We had this mix of Arabic and English dialect to learn," Strait said. "We had to tone down our modern-day mannerisms, like talking with our hands, the way we walked, not talking a lot," Belle added. 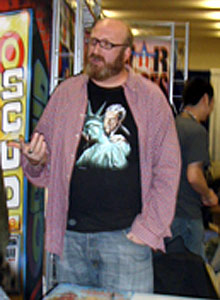 We also got to see a rough five-minute cut of The Chronicles of Narnia: Prince Caspian, which hadn't been seen before--this film, based on the second (and some say best) book in the series, is definitely darker and more complex than 2005's The Lion, the Witch and the Wardrobe. Whereas that pic was a lot more kid-friendly, here we see the Pevensie kids return 1,300 years in Narnia's future, tasked with the battle-laden job of reinstating the rightful heir to the throne while the evil King Miraz takes charge. 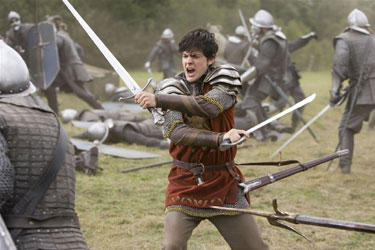 Who wants a medieval beat-down?
Some of the footage we saw was unfinished (in a few scenes the minotaurs were half-drawn, animation filled in for more realistic images to be created later--which was actually kinda cool given that unless you work in the movie biz you don't usually get to see how they do it), but there's lots of potential for greatness. To me it looked reminiscent of Lord of the Rings (especially one scene where a bunch of black-horsed riders chase the prince through rivers and forest)--no doubt in part because it was filmed in New Zealand with help from effects company Weta, which assisted on the LOTR movies, but hey, I loved those movies so I'm definitely intrigued.