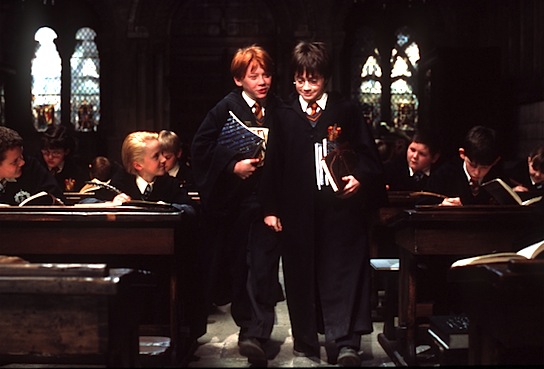 If you're a student and haven't already made the return to the classroom for the fall, chances are your first day back to school is either this week or next. And if you're a movie-loving person between the grades of kindergarten through grad school, chances are you're also devoting this time to looking at favorite films related to this annual event. Maybe you're about to enter the halls of high school for the first time and are reacquainting yourself with great teen movies, which will only confuse you once you get on campus and see kids that don't look 30 years old. Still, it ought to be a mandatory tradition to watch Grease on the eve of a new school year. Perhaps even an obligation for all incoming students to sing a ditty about what their summer was like, and was there romance involved.

Of course, there are titles you can avoid, too. The seemingly aptly named Back to School is plenty funny but it's not a very relatable scenario unless you're an old man heading to college. Breakfast Club is a classic, but on the first day of school it's going to have you wanting to quickly get detention in hopes of having a similar experience, and that's no good. Ditto for Ferris Bueller's Day Off. Let's actually get back to school before dreaming of playing hooky (watch Pinocchio instead and learn from the character's mistake). And don't watch Mean Girls if you're about to change schools, especially from another country. If you want John Hughes, though, Sixteen Candles or Pretty in Pink should be fine.

Some other great films involving the first day of school include The Perks of Being a Wallflower, Lucas, Fast Times at Ridgmont High, Saved!, Twilight, 10 Things I Hate About You and most Harry Potter installments.

What's your favorite movie to watch in preparation or anticipation of the new school year?