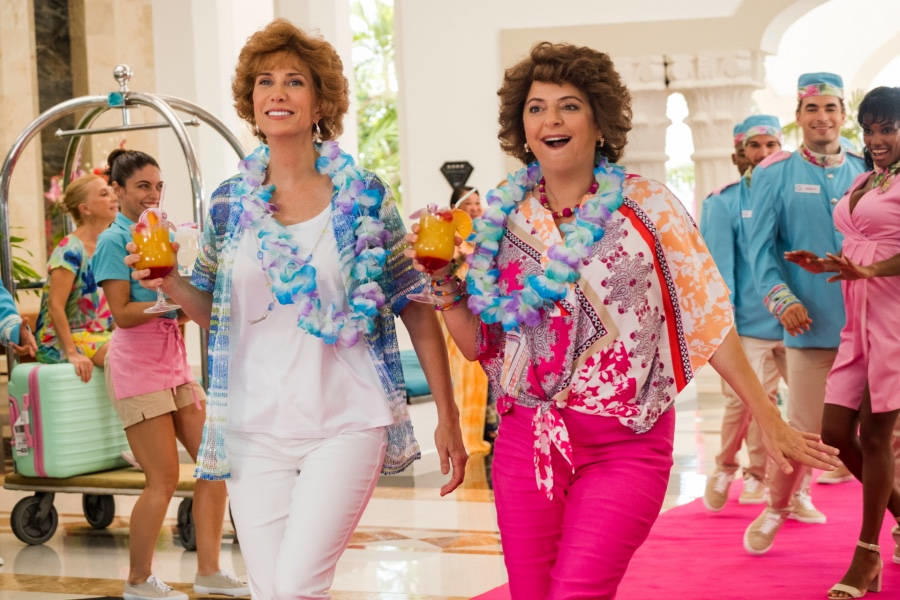 What to Watch on FandangoNOW and Vudu: ‘Barb & Star Go to Vista Del Mar,’ Valentine’s Day Favorites and More

One of the funniest movies of 2020 is now available to buy digitally in 4K UHD: The Croods: A New Age is a sequel that improves upon the original with its humor and its visual imagination. There’s something for the whole family in this wild animated feature about the titular clan of cave people that stars the voices of Emma Stone, Nicolas Cage, Ryan Reynolds, a scene-stealing Leslie Mann and the late Cloris Leachman. And the movie comes with tons of extras including two exclusive new Croods short films!

For just the grown-ups, I recommend Ben Hozie’s new indie drama PVT CHAT, which stars Uncut Gems breakout Julia Fox as a cam girl and Peter Vack (Ma) as her obsessed client. The sort-of romantic movie could make for a unique Valentine’s Day viewing option this weekend, either for couples or especially for the lonely single folks out there. It’s also a great new addition to the canon of essential movies set in New York City.

Another selection for late-night viewing is A Glitch in the Matrix, the new documentary from Room 237 director Rodney Ascher. A perfect midnight-movie mix of horror and trippy animation and ideas, the film explores the belief that we are all just living in a computer simulation, a la The Matrix. Another must-see documentary new to FandangoNOW is the hypnotic, spectacular concert film David Byrne’s American Utopia, directed by Spike Lee.

If you’re going to pick up The Croods: A New Age, you’re also going to want to grab the original animated feature. You can actually purchase both The Croods and the sequel together for a discounted price when you buy the Croods two-movie collection. And if you want to go beyond the feature films, there are four seasons of the DreamWorks animated series Dawn of the Croods available for purchase by the episode or by the season.

The Safdie brothers’ Uncut Gems is a perfect movie to pair with PVT CHAT, and not just because of Julia Fox — they’re also both set in New York City and both involve gambling and shady and desperate characters with Fox serving as the one gold-hearted soul in the bunch. But if you need something a little cleaner and more chaste after watching PVT CHAT, there’s always the ‘90s rom-com You’ve Got Mail, starring Tom Hanks and Meg Ryan as New Yorkers who meet in an online chatroom.

The obvious movie for a double feature with A Glitch in the Matrix is The Matrix, but there are plenty of other movies referenced in the documentary involving similar plots and themes. They include The Truman Show, The Thirteenth Floor, Dark City and anything based on Philip K. Dick, like Total Recall. As for David Byrne’s American Utopia, the one and only choice is the Talking Heads concert film masterpiece Stop Making Sense.

The highly anticipated movie Barb & Star Go to Vista Del Mar arrives on digital as a Home Premiere rental release this Friday, February 12th. Written by Kristen Wiig and Annie Mumolo, who last collaborated on the Oscar-nominated script for Bridesmaids a decade ago, the very silly comedy also stars the duo as the titular sheltered Midwest ladies, who decide to go on a beach vacation and find more adventure than they’ve bargained for.

What are some great Valentine’s Day movies to rent this week?

Valentine’s Day is coming up this weekend, and since I’ve already recommended PVT CHAT and A Glitch in the Matrix, let’s continue with a look at virtual love stories for the single and probably isolated folks out there. You’ve got Spike Jonze’s sci-fi film Her about a man and his operating system, Ex Machina with its robotic love interest and the original Catfish documentary about how your online crush or partner might not be who you think they are.

For those looking for more conventional Valentine’s favorites, there are the staples: The Notebook, Amelie, Casablanca, Brokeback Mountain, Sleepless in Seattle and the Before Sunrise trilogy. Also Moulin Rouge! for some musical romance, The Princess Bride for a funny fairy tale love story, and films with star-crossed lovers, such as William Shakespeare's Romeo + Juliet and Titanic. Don’t forget a Richard Curtis movie, maybe Notting Hill.

Speaking of Valentine’s Day movies, Vudu currently has a sale on romantic titles where you can mix & match two favorites for just $9.99 for the pair. Among the classics available include Love Story, When Harry Met Sally…, Moonstruck and Some Like it Hot. There are also deals on specific actors’ filmographies, including romantic genre regular Katherine Heigl, and talent bundles, such as the romance-heavy Audrey Hepburn five-movie collection.

Vudu also currently has a mix & match deal for black & white movies, which include a number of romance classics. Here are my recommendations for pairings: the Frank Capra Best Picture winners It Happened One Night and You Can’t Take It With You; the Katharine Hepburn and Cary Grant couplings of Holiday and The Philadelphia Story; and the Preston Sturges romantic comedies The Lady Eve and The Miracle of Morgan’s Creek.

Continuing the romantic picks, at FandangoNOW you can buy Moulin Rouge!, Australia, and William Shakespeare’s Romeo + Juliet in a three-movie bundle for less than $30. Or you can pick up the Nicholas Sparks five-film collection, including The Notebook, for under $30. Then there’s the classic rom-coms four-film collection featuring The Princess Bride, When Harry Met Sally…, Four Weddings and a Funeral and Moonstruck for less than $15.

The Universal Monsters movie Dracula turns 90 years old this week, as does the Western classic Cimarron. Other big anniversaries include Hannibal, which turns 20, Broken Arrow and Beautiful Girls, which turn 25, Sleeping with the Enemy and L.A. Story, which turn 30, Woody Allen’s Hannah and Her Sisters, which turns 35, American Pop and the original My Bloody Valentine, which turn 40, and Martin Scorsese’s Taxi Driver, which turns 45.

Which must-see movies are coming soon to FandangoNOW and Vudu?

There are a bunch of exciting family films coming to digital in the next two months. First, there’s a new live-action Pinocchio, which stars Oscar-winning actor Roberto Benigni as Geppetto, arriving on February 23rd. Then the latest SpongeBob SquarePants feature, The SpongeBob Movie: Sponge on the Run will premiere on digital on March 4th. Finally, Disney and Pixar’s most recent animated movie, Soul, will be available on March 23rd.