Want to Have Your Name on the 'Paranormal Activity' DVD?

You came. You saw. You kicked its ghostly ***. Well, sorta. At the very least, Paramount would like to thank you, all the Paranormal Activity fanatics out there, for helping the 'little fright movie that did' garner nearly almost practically $100 million at the box office (expect that notch to fall here quick). It is official, though, P.A. is the most profitable return on an investment ($15,000 to produce, a few million here and there to promote, and gazillions of dollars in return) in the history of cinema.

So now that you've had the bejesus scared out of you over and over, the studio has offered to put your name (yes, you!) in the credits on the DVD, for helping to support the cause. All you have to do is register your name on their site before Monday, 11/9 at noon pacific, and bam, you'll live on forever into eternity. Go to it, all you children of the night. And may your lives be forever filled with spooky visions on your big screens, but not off! 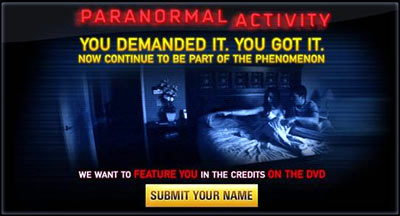