This in from Lizerne Guiting: Will Star Wars fans make Superhero Movie suffer? 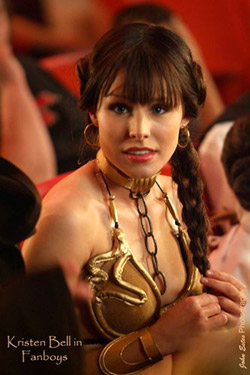 Diehard Star Wars junkies refuse to be appeased by the Fanboys olive branch the Weinstein Co. laid down this week. The movie, about four buddies who break into Skywalker Ranch and steal a copy of Star Wars: Episode I so their terminally ill friend can see it before croaking, wrapped two years ago but has been in limbo ever since. When the studio announced plans to scrap the cancer storyline, aficionados launched a grassroots campaign to boycott Superhero Movie and future Weinstein and Dimension Films projects. As a concession, Weinstein has announced it will release two versions of the film on DVD – one with the cancer plot and one without.

Fans are still upset, however, and have laid out the terms to "Darth Weinstein." They want the original version of the film released in theaters, or else. No word from Weinstein on that yet.

Guess Kristen Bell in a slave Leia costume is not the only reason fans were excited to see Fanboys. How’s that for heart?