Just the other day we reported that Spielberg had attached himself (as producer only) to a feature adaptation of those Matt Helm novels. And while some folks took that to mean the man might direct the first Bourne-like flick, things have changed and now Spielberg has finally made his next directorial project official: he's remaking the 1950 film Harvey, which starred James Stewart as a mild-mannered pleasant man who's convinced he has an invisible friend resembling a 6-foot rabbit. 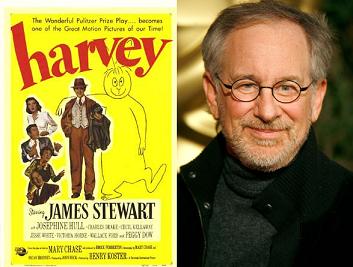 Based on the way Variety reports the news, it seems as if this version of Harvey will be more an adaptation of Mary Chase's Pulitzer Prize-winning play than a remake of the 1950 flick. Production will begin early next year, and so far the two names being mentioned with regards to the starring role are Tom Hanks and Will Smith. Since either will have no problem starring in a Spielberg film (especially the filmmaker's good friend Tom Hanks), it's going to come down to whose schedule allows enough room to shoot the movie.

Personally, I think Spielberg will have more luck at the box office if he chooses to go with Will Smith, though Hanks feels better for the role and could probably turn out a more genuine performance.

What do you think about Spielberg choosing Harvey as his next movie? And who should star – Tom Hanks, Will Smith or someone else entirely?