Summit Entertainment is wasting no time in blanketing the earth with Twilight-related news. Less than 24 hours after they announced a giant 15-city New Moon cast tour comes this brand new official title art for The Twilight Saga: Eclipse, which hits theaters on June 30, 2010. 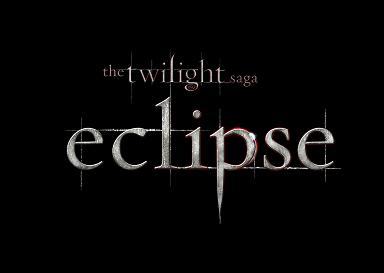 In Eclipse, which is being directed by 30 Days of Night and Hard Candy helmer David Slade, things heat up between the vampires and werewolves forcing Bella (Kristen Stewart) to finally choose between Edward (Robert Pattinson), her fang-toothed dreamboat of a boyfriend, and Jacob (Taylor Lautner), the wolf who sports a set of bronzed six-pack abs. And they said high school was easy. Pffft!
'Footloose' Director Bails
Chalk up yet another roadblock for the planned Footloose remake/reboot: Variety tells us that director Kenny Ortega has left the project due to creative differences over tone and budget. Ortega, who also helmed the Michael Jackson concert doc This Is It, is said to have wanted a Footloose movie with "elaborately-staged musical numbers", while execs at Paramount wanted "an edgier drama with less emphasis on the musical numbers" and a smaller budget.
The current plan is to look for a new director while the film maintains its March 2010 production start with Gossip Girl's Chase Crawford in the lead opposite Dancing with the Stars' Julianne Hough. Which Footloose remake would you rather see – one with lots of singing and dancing, one that sticks to more straight-up drama, or one that doesn't happen at all?
Paramount Wants a 'Paranormal Activity' Sequel?
The talk of the town today revolved around the unbelievable success story of Paranormal Activity, which actually wound up beating Saw VI at the box office this past weekend after slowly climbing the charts over the past few weeks. The small, independent film (shot for $11,000 in the director's bedroom with unknown actors) has turned into such a success that if it should reach $100 million (it's at $62 million now), it will give Paramount its greatest return ever. 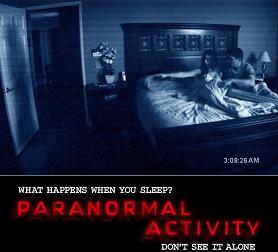 Now, the studio that took a chance on the creepy ghost story after holding it on the shelf for two years, may want to turn around and dole out a sequel. Speaking to the LA Times, Paramount's Brad Grey said, "We have the rights on a worldwide basis to do Paranormal 2, and we're looking to see if that makes some sense."
But does it make sense? We all know what happened when they tried (and subsequently failed miserably) to make a Blair Witch sequel, so what's to say they'll actually get this right? Would you want a Paranormal Activity sequel, or is Paramount better off spending their money on something else?
Like it? Share it: