I think congratulations are in order for all you expert Fandango box office predictors, since last week you (and I both) overwhelmingly chose Where the Wild Things Are as the number one movie, and, well, it came through. But let’s not let one big win get to our heads, because it’s a brand new week with four brand new movies opening up in theaters. Will the boy robot beat the monster horror franchise? And what’s this about a new vampire flick that has nothing to do with Twilight? Let’s take a look … 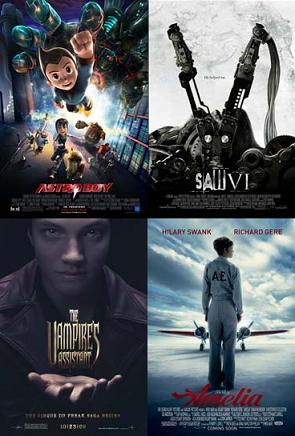 Astro Boy
What’s the Scoop: Based on the classic anime tale, Astro Boy follows the story of a robot boy trying to come to terms with being both a robot and a boy, while also trying to save his city from an evil threat.
Why It Might Win the Weekend: Here’s your obligatory family-friendly counter-programming on a weekend when scary, spooky flicks rule the box office. Parents looking to keep their young ones away from the freaky stuff will definitely opt for this cute, fun, visually stimulating animated flick.

Saw VI
What’s the Scoop: Jigsaw brings his funky, twisted killer traps back to the big screen for this sixth installment in the popular horror franchise that’s sure to make you regret eating a big meal before entering the theater.
Why It Might Win the Weekend: All of the Saw films have opened to $30 million or more at the box office, which means there’s a very good chance this sequel will rule the weekend.

Amelia
What’s the Scoop: A biopic about the life and times of famed aviatrix Amelia Earhart, who became somewhat of a legend when she disappeared over the Pacific Ocean while attempting to fly around the world.
Why It Might Win the Weekend: Hilary Swank returns to a nice, meaty role with an eye on Oscar gold, though critics are calling this one a snorefest. Will Amelia somehow find enough gas to power its way up on the box office charts?

Cirque du Freak: The Vampire’s Assistant
What’s the Scoop: A teenager looking for more excitement in his life leaves home, joins up with a traveling carnival and becomes a vampire.
Why It Might Win the Weekend: Sadly, the audience for this movie will probably be busy taking in that sixth Saw installment, though younger kids and Twilight fans eager to quench their vampiric thirst may take in a screening.

My Prediction: While I’m sure Astro Boy will give it a run for its money, there’s no way I can bet against Saw VI this weekend. She’s a reliable old horse and this is her time to shine. I’m sure one day she’ll go down, but I don’t think it’ll be this year.
Now it’s your turn. Vote in our poll below and let us know who you think will win the weekend.