Scoop This: Beckinsale and Biel in 'Total Recall,' Plus Updates on 'R.I.P.D.,' Disney's 'Oz' and 'American Reunion'

Let's take a look at some new casting news from the past couple days. 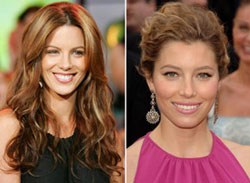 Looks like both Jessica Biel and Kate Beckinsale have officially joined Colin Farrell in the Total Recall remake. Becks will play Lori, the bad girl, while Biel will play Rachel, the good girl. Meanwhile,Bill Nighy has signed on to play Quatto, the leader of the resistance while John Cho will play McClane, the, “smooth-talking rep for the mind-messing company that tempts Farrell to implant fantastic memories into his brain,” according to Entertainment Weekly. Note that this version of Total Recall will have nothing to do with Mars, and will instead follow a factory worker (Farrell) who may or may not be living another life as a spy in a place called New Shanghai.
R.I.P.D.
Jeff Bridges has officially joined this project about a group of undead detectives who are tasked with maintaining order amongst the dead. Bridges will play a veteran undead detective, while Ryan Reynolds will star as a newly dead detective. [The Wrap]
Oz; The Great and Powerful
Zach Braff has signed on to play Frank, Oz’s loyal yet unappreciated assistant. Meanwhile, 11-year-old Joey Kingwill play China Girl in Disney's Oz: The Great and Powerful, to be directed by Sam Raimi and due in theaters on March 8th, 2013. China Girl's character is described as a porcelain girl whose family is destroyed by the evil witch Evanora (Rachel Weisz). Oz (Franco) feels bad for her and takes her under his wing.
American Reunion
More casting has taken place on the next big-screen American Pie film, American Reunion, with Katrina Bowden (30 Rock) signing on to play Oz's (Chris Klein) party-girl girlfriend. The film is already set to star Jason Biggs, Seann William Scott, Alyson Hannigan, Thomas Ian Nicholas, Chris Klein, Eugene Levy, Tara Reid, Eddie Kaye Thomas, Jennifer Coolidge and Mena Suvari. [Variety]
Like it? Share it:

Next Article by Harry Medved