Of course you should all run out and see Harry Potter and the Half-Blood Prince this weekend regardless of what kind of Potter fan you are. But if you’re looking for something a bit scarier and you’re in the mood for a great curl-up-on-the-couch-and-hold-on-tight kinda horror movie, then this week my recommendation is for a new flick that just hit DVD called [REC]. 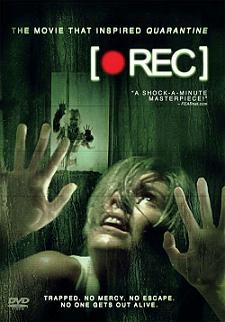 If you’re familiar at all with the movie Quarantine, then good, because that film is actually an English-language remake of the Spanish-language [REC] – and the latter also happens to be ten times better, too. The film follows a TV reporter who follows firemen into a building on a routine call after receiving a call from an old lady trapped inside. However, once in, they soon realize there’s something a whole lot more terrifying than a scared old lady.

Here are reviews for you check out.

"Confession time: The last 20 minutes of this movie I watched with fingers in my ears and peeping through my eyelashes, determined not to jump out of my seat like the directors had already managed a couple of times before…" [Twitch]

"Short and sweet, [REC] delivers a perfect fast-paced ride that will score big with horror fans everywhere despite its familiar elements." [Dread Central]

[REC] is now available on DVD in stories everywhere. Watch it … if you dare.