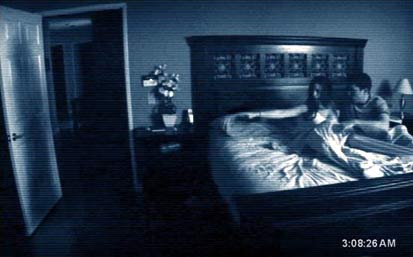 In case you hadn't already heard (but we know all of you Fandango movie fans know this already, right?), a little horror movie called Paranormal Activity has been tearing it up at the box office. While it's rumored that the film - a haunted couple story featuring zero gore, minimal effects, and unknown stars - cost a mere $16,000, it's already wracked up over $30 million and is still only playing in 760 theaters. This week, the nifty thriller continues to expand its release, and Paramount continues its saavy marketing of the film. This Thursday night, at 10 theaters only, the studio will host exclusive Paranormal Activity parties.

How does that work, you ask? It's simple, dear horror lovers...

Scoop This: 'Twilight' Awards, 'Little Fockers' and Shyamalan is the Devil

Scoop This: 'Twilight' Awards, 'Little Fockers' and Shyamalan is the Devil