Since we're in a creepy kinda mood today, why not extend it to talk about a pretty creepy flick. Not so creepy for Paramount, though, who are probably ecstatic to see this little film that was made for something like $11,000 cross the $100 million threshold at the box office. Not only that, but it's also now the highest grossing R-rated thriller of the past decade, and probably the greatest return for Paramount in the history of the studio.

But where did Paranormal Activity even come from? Well, it debuted at the Slamdance Film Festival a couple of years ago and was eventually picked up by Paramount's genre division before they went under. The idea was to remake the no-budget film with a higher budget, but folks went back and forth on that decision which led to the film sitting on a shelf, collecting dust. 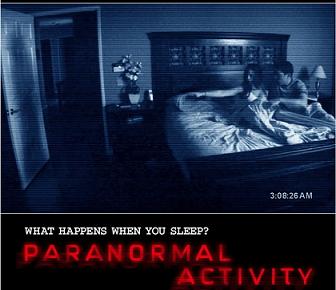 Eventually Paramount decided to release Paranormal Activity in a select amount of theaters for strictly midnight screenings. But when they began to see the screenings selling out like crazy, they used the hype to generate more hype by allowing folks to demand that the film play in their neck of the woods. Before you knew it, moviegoers were demanding the film left and right – and once one million people demanded the film, Paramount released it nationwide where it surprised everyone by beating Saw VI at the box office on that film's opening weekend.

What's next? Well, people will be talking about this little film for awhile, as well as trying to figure out whether it's a one-time thing or if there's a recipe for this sort of success. You're bound to see Paramount try to put together a sequel (in fact they've already confirmed to be working on one), and look for tons of amateur filmmakers to follow in their footsteps. As far as Paranormal Activity writer-director Oren Peli is concerned, he's already working on his next movie, Area 51, which will take the same sort of "found footage" concept and apply it to a bunch of teenagers breaking into the mysterious Area 51. Yeah, so aliens instead of ghosts.