Disney's next spin on the fairytale classic Rapunzel is Tangled, and they've just debuted a new trailer via Moviefone. Voice talents include Mandy Moore, who plays the princess with the long, golden locks, and Zachary Levi, who plays the charming bandit she teams up with. 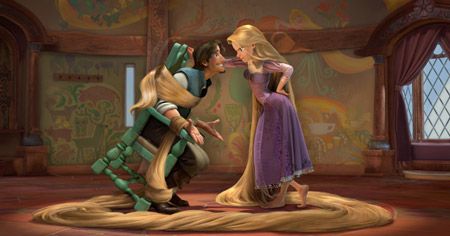 Looks like a lot of fun for the kids with a wily mix of animal characters thrown in, including the bandit's sassy white horse, Rapunzel's sidekick chameleon, and a shady, rat-touting villain. Watch for yourself and let us know what you think. Are you looking forward to seeing Disney's next CG 3D film come Nov. 24?

Who Should Play Al Capone in the New Biopic?

Who Should Play Al Capone in the New Biopic?