No real "DVD of the Week," per se, but lots of new releases come out today.

Mirrors This critically maimed remake of a Korean horror flick stars Kiefer Sutherland as a disgraced NYPD cop turned burned-out department store security guard, who starts seeing dead people in the many store mirrors that somehow survived a massive fire. I can't quite recommend this as a "DVD of the Week," but it certainly didn't deserve a critical drubbing--in fact, it works much better on the small screen than the big one and probably would have done well as a straight-to-DVD release. The sound and visual effects are terrifically gory (horror fans, there's one scene that just will knock your socks off) and while the story's pretty silly and the film is too long, the end delivers. Definitely, definitely watch the unrated version. 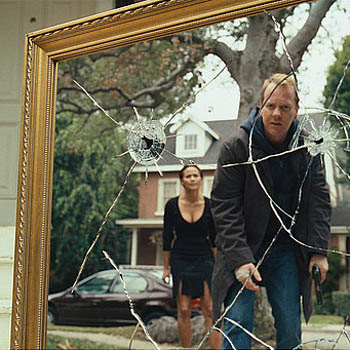 Is that Kiefer, reflecting on his career?
Appaloosa Ed Harris directs and stars in this horsey bromance about two lawmen tasked with bringing peace to the small town with the titular name. At the same time they're trying to bring the offending vigilante in, here comes Renee Zellweger as the town floozy to mix things up.
Swing Vote In a strange twist of fate only possible in the movies, a single dad-of-bratty-kid (Kevin Costner) becomes the great decider in the presidential election.
My Best Friend's Girl Raunch-com starring Kate Hudson and the comic who somehow still has a movie career, Dane Cook.
Tyler Perry's The Family That Preys Two matriarchs (Alfre Woodard and Kathy Bates) navigate their families through the soapy waters churned up by movie mogul Perry.
Patti Smith: Dream of Life Suitably bemused, hazy chronicle of the iconic singer's last 10 years, it's less a true documentary than a melancholy portrait of the lady.