New this week on DVD, we have one Street Fighter, Two Lovers, a trio of musical hearthrobs, three shorts about one exotic city, and 12 Rounds. 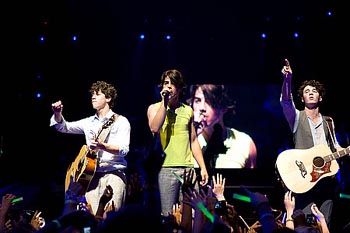 Jonas Bros.: The Concert Experience The pop singing sensations follow Miley Cyrus into the pop-umentary arena with this movie that chronicles their "Burning Up" tour across the U.S., screaming tween fans in tow. The pic shows the concert footage as well as everything happening backstage, with guest appearances by Taylor Swift and Demi Lovato. The DVD features four songs that didn't make it into the theatrical cut.

12 Rounds Director Renny Harlin returns with this action entry starring WWE wrestler John Cena as a New Orleans cop who must endure 12 rounds of a cruel, dangerous "game" to save his girlfriend, who has been kidnapped by a demented criminal he put away a year ago. Ridiculously implausible, but put your brain on hold and enjoy the ride.

Street Fighter: The Legend of Chun-Li In this second attempt to bring the video game to the big screen, Kristin Kreuk stars as the titular character who travels to Bangkok to find a martial-arts master who can translate for an ancient scroll she's been given, and help her avenge her father's murder.

Two Lovers Pity Joaquin Phoenix has apparently retired from acting with this film, an achingly melancholic, restless movie about a depressed man torn between his love of the exciting but unattainable Michelle (Gwyneth Paltrow) and the stable woman his family is pushing him toward. Excellent performances all around.

Tokyo! Fans of the bizarre, and Michel Gondry, will find this strange trio of shorts about the Japanese megalopolis engaging and imaginative. Gondry's Interior Design follows what happens to a young couple who ambitiously moves to the city. Leos Carax's Merde is just really, really weird, involving a guy dressed like a leprechaun who lives in the sewers and eats people's money. Bong Joon-Ho's Shaking Tokyo is about a shut-in who falls for a pizza delivery girl. Enter at your own risk.