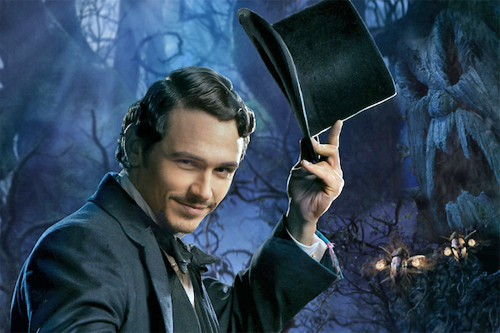 Oz the Great and Powerful Pay no mind to those finnicky critics--Sam Raimi's visit to the merry old land of Oz is an entertaining prequel that's funnier, prettier and more clever than it has any right to be. With winks and nods to the 1939 classic, it whisks the titular wizard (James Franco) off to a mystical land via tornado, where he meets three witches (two good, one bad--or is it the other way around?) and supporting characters in the form of a monkey and a china doll. As a two-bit "prestidigitator" who isn't at all great or powerful, Franco brings a winsome charisma and sense of humor to his con-man turned reluctant hero; Rachel Weisz, Mila Kunis and Michelle Williams all are game (though not great) as the witches, and Raimi makes wonderful use of CGI and live-action (in fact the tiniest character makes the biggest impression: the beautifully rendered china doll steals her scenes, while Zach Braff somehow makes his strange-looking monkey endearing). Extras: Bloopers, featurette on Walt Disney and the road to Oz (DVD/BD); the BD adds an immersive, interactive Second Screen look at the characters, sound and creatures; featurettes on bringing China Girl and the witches to life; James Franco-directed short and more. Important to note: the 3D set does NOT come with a 2D version, and if you're using TV speakers, the setup defaults to Dolby 2.0 instead of 5.1 or DTS, a setting that can be changed in the "language" menu.

Hansel & Gretel: Witch Hunters It's hard to say what this film wants to be: comedy, action, gory superhero movie? Hansel (Jeremy Renner) and Gretel (Gemma Arterton) escape from a witch as kids, set out to rid the world of witches, and are hired by a town's mayor to find out why the local kids are all disappearing. Cue blood-spattered battles, aerial shots of the forest, steampunk weaponry and kids-on-milk-bottles jokes, and you've got a lot of WTF going on. Extras: Featurettes on reimagining the fairy tale, the creation of the witches, and the design of Edward the Troll.