It's not debuting in theaters until this Friday, but New Moon has already set at least one record … and it's a big one. According to our top secret number-crunching robot here at Fandango headquarters, The Twilight Saga: New Moon has just become the biggest advanced ticket seller in Fandango history – beating out other giant blockbusters like Star Wars: Episode III – Revenge of the Sith (second place), Harry Potter and the Half-Blood Prince (third place), The Dark Knight (fourth place) and the original installment, Twilight, which rounds out the top five. 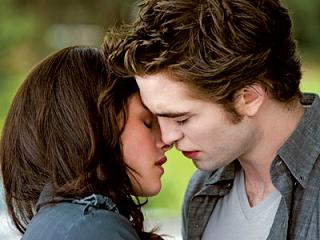 Part of this could be due to advanced tickets going on sale back in September – over two months before the film was set to hit theaters. Nevertheless, it's clear now that the Twilight franchise will go down as one of (if not) the largest and most popular in history. Here are some additional fun facts taken from a poll of over 2,000 New Moon ticket-buyers:
·        98% say the action in New Moon looks better than the action in Twilight.
·        72% plan to see the movie with a group of three friends or more.
·        52% of survey respondents say they dream about vampires.
·        22% are mothers and daughters planning to see New Moon together.
·        10% of fans plan to show up at the theater on Thursday night in costume, dressed as characters from the saga.
·        51% say they will scream when they're in the theater as the lights go down for the first time on Thursday at midnight (while 18% plan to put their fingers in their ears until the screaming stops).
·        61% are more excited to see Taylor Lautner taking off his shirt than Robert Pattinson doing the same in New Moon.
·        19% have read or seen a production of William Shakespeare's Romeo & Juliet since reading New Moon.
Gotta love that last statistic, right? Heck, if anything, The Twilight Saga is inspiring kids to actually read Shakespeare! Now if only Bella and Edward would eat more vegetables in the film, we'd have a lot of very happy parents out there.
Like it? Share it: