February 22nd 2008, 7:40 pm
This just in from Stacie Hougland, live from San Francisco: WonderCon, for those of you who don't know, is a humongous convention being held at San Francisco's Moscone Center for comic book and movie fans that also serves as a showcase for upcoming movies. I just stopped in for a presentation of Wanted, that action pic with Angelina Jolie, James McAvoy and Morgan Freeman, which included a screening of a full five minutes of footage from the film that showed off the insane special effects that have become Russian director Timur Bekmambetov's (helmer of the little-seen but quite brilliant Day Watch) stock in trade--one scene had Jolie flipping a Viper mid-air horizonontally over a police barricade, landing sideways on a city bus, blowing it over, and then driving away. Yee-haw! I saw Day Watch, and I can tell you there's a good reason this unknown director is suddenly working on a big-budget studio pic with Oscar winners and contenders. Bekmambetov was unable to be present for the screening but in a taped intro he said he's working on additional footage for the film (moved from March to June 27) and Danny Elfman is doing the score.

For his part, McAvoy, who managed to fit in a WonderCon appearance the same weekend he'll be on the red carpet for Oscars (supporting his Oscar-nominated Atonement) says doing an action movie was never something he thought about in the wee hours. "I always admired Michael J. Fox, he jumped over more things in the Back to the Future movies than Mel Gibson did in the Lethal Weapons," the amiable (and, OK, adorable in scruffy jeans and goatee) actor said during a panel discussion after the clip. "He got to jump over a Delorean--I got to jump a bridge!"

* * *
Unfortunately, the nighttime 30-minute screening of Journey to the Center of the Earth 3-D starring Brendan Fraser was overbooked and I wasn't able to get in, which was disappointing given that earlier in the day I got to see some cool making-of footage that had my inner 3-D fan raring to go. It showed the blue-screen process of creating the scene where Fraser and his two co-stars fall through the earth into a strange world of huge mushrooms, flying fish and giant dinosaurs. It's the very first live-action movie to be filmed in digital for 3D projection, so it is ambitious, and looks fun.

"Hey...is that Lou Ferrigno that just got off our plane?"
"I dunno, kinda looks like him--that guy's huge. But wouldn't he be like 70 by now?"
"He looks like that guy we saw at Petco in Santa Monica a few weeks ago. I think it's him."
"He's got two hearing aids, so maybe."
"Yeah, it's him. Look, he's charging 20 bucks for a photo."
"Wow. He didn't let himself go like Schwarzenegger." 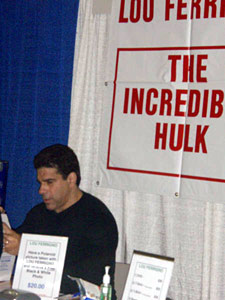 More comic stuff than you can shake a stick at. 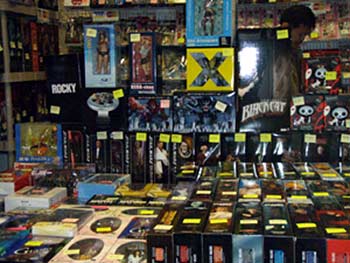 Oscars: There Will Be Blood...and Movie Stars

Oscars: There Will Be Blood...and Movie Stars