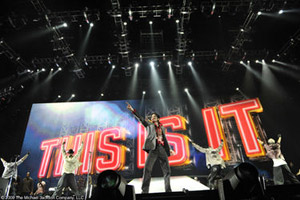 It's been four months since the King of Pop passed away, and although he won't be showing up at tomorrow's This Is It debut at Universal CityWalk, you can still pose for a pic with the $350,000 Michael Jackson wax figure, displayed exclusively at CityWalk for one night only. Fans can start queuing at 5 p.m., Oct. 27, for the 9 p.m. screening of the movie, coinciding with the worldwide premiere.

Madame Tussauds' London Studios, known for wax creations that bear a striking resemblance to their real-life luminaries, created Jackson's statuette, which is regularly on display at its Hollywood location.
If you can't make it out to see MJ's wax likeness on the West Coast, you can always tune in for a live webcast of This Is It's world premiere at the Nokia Theatre in Los Angeles beginning at 4:30 p.m. PST. Invited guests include cast members from High School Musical, 90210 and So You Think You Can Dance, as well as celebs David Cook, Forest Whitaker, Kate Beckinsale, P. Diddy, Smokey Robinson, Snoop Dogg, Tyrese Gibson and Vivica A. Fox.
You can also watch it here:
Video chat rooms at Ustream
Will you be lining up at Universal CityWalk or watching the premiere online? Or watching at your local theater on opening night? It’s not too late to buy tickets to Michael Jackson's This Is It on IMAX and 35 MM screens for its limited two-week run.
Related Links
Buy Tix to Michael Jackson's This Is It
Michael Jackson's This Is It Exclusive Clip
Michael Jackson's This Is It Trailer
Like it? Share it: