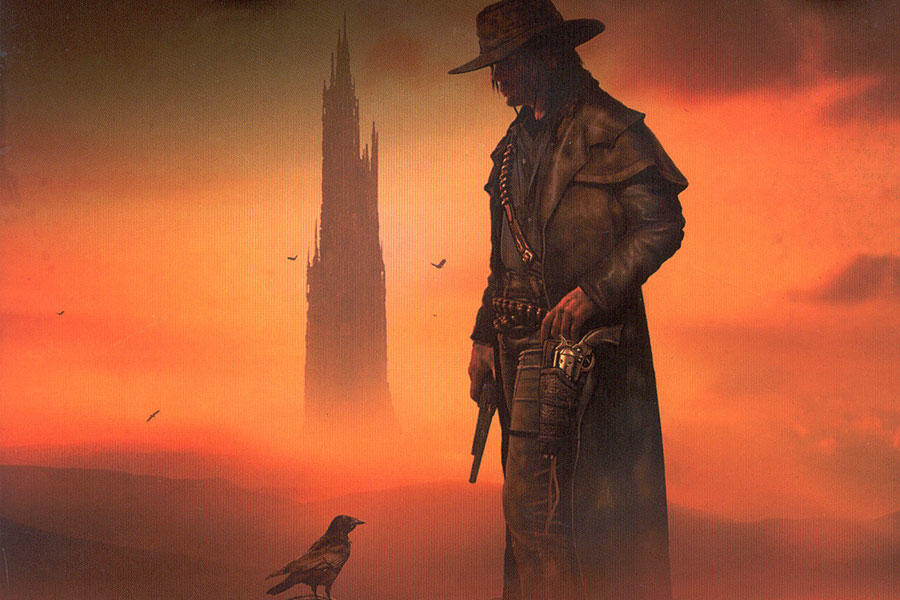 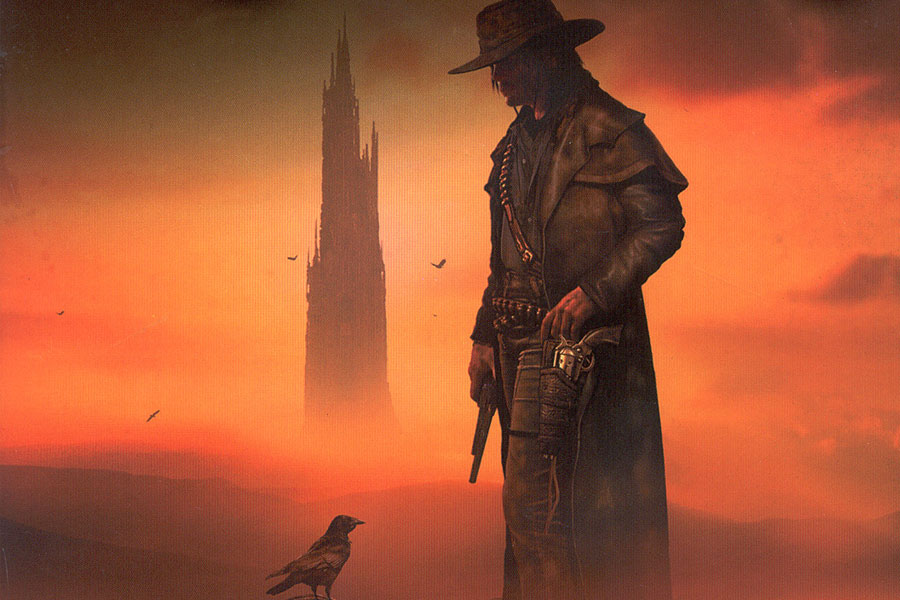 The Dark Tower series is not just Stephen King's grand opus, it's also one of the most beloved fantasy series ever written. It's a dense, complicated and, frankly, weird story that sprawls across eight novels that were written over the course of three decades. Hollywood has been trying to adapt it for years and now it is finally, truly happening. Entertainment Weekly reports The Dark Tower will begin filming in South Africa in just seven weeks.

While that news is great for those who just want to see someone try to tackle it on the big screen, not everyone is rejoicing. Some of the casting choices have divided fans, as has the choice of which book to adapt first. Before you default to outrage, though, let's take a look at what we actually know.

First, what is The Dark Tower even about?

Very, very long story made short, The Dark Tower is about the quest of a man named Roland to reach the titular building, which he believes is the nexus of not just his world but many intersecting worlds. Along the way he encounters a group of people united by destiny -- his ka-tet -- who join his journey, sometimes of their own accord, sometimes because Roland literally pulls them into it. All the while he pursues the man in black, a shape-shifting figure of pure malevolence who is not only also questing for the tower, but is almost always one step ahead of Roland.

Who has been cast so far? 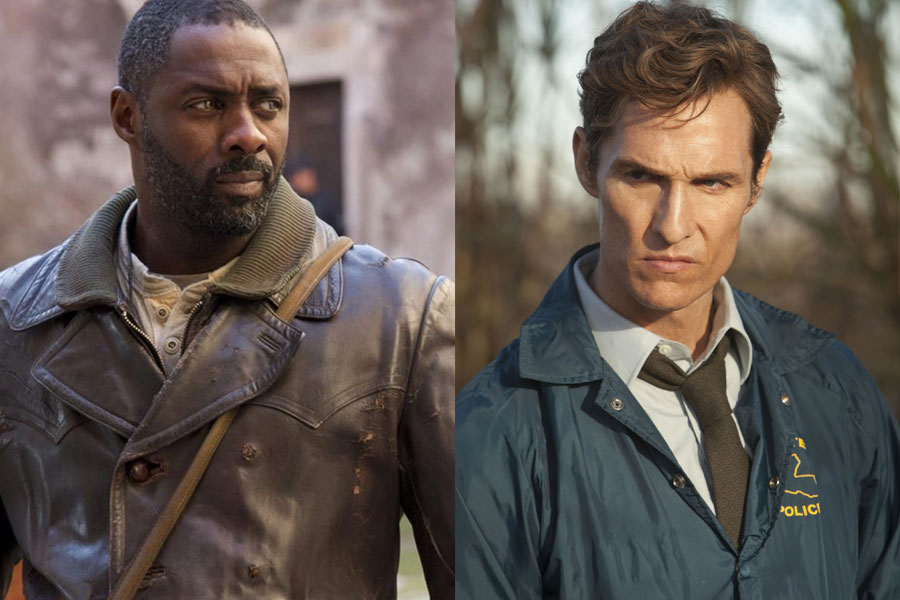 Idris Elba has been cast as the gunslinger, Roland Deschain. He lives in an alternate reality to our own and while he's called the gunslinger, he's not just some guy who is okay with a pistol. In Mid-world, gunslingers are kind of like cowboys and samurais and superheroes all rolled into one. He's a very serious man who was tasked with keeping peace in his world and is now basically the last of his kind.

Matthew McConaughey has been cast as the man in black, a figure that goes by a number of different names and even faces throughout not just this story, but other Stephen King stories (he goes by the name Randal Flagg in The Stand). His life has long been intertwined with Roland's and now they're both kind of living artifacts of their own worlds whose sole purpose is to reach the Dark Tower and all that it commands.

They are the only two officially cast at this point, though Mad Max: Fury Road actress Abbey Lee is also currently in talks to join the project as a female lead named Tirana, which is a big wild card as that character in the books not only shows up way later in the series, but isn't that important. So if she is indeed a major piece of casting, it means they're probably combining a few characters together for efficiency's sake.

Wait, those are amazing actors. So what's the controversy? 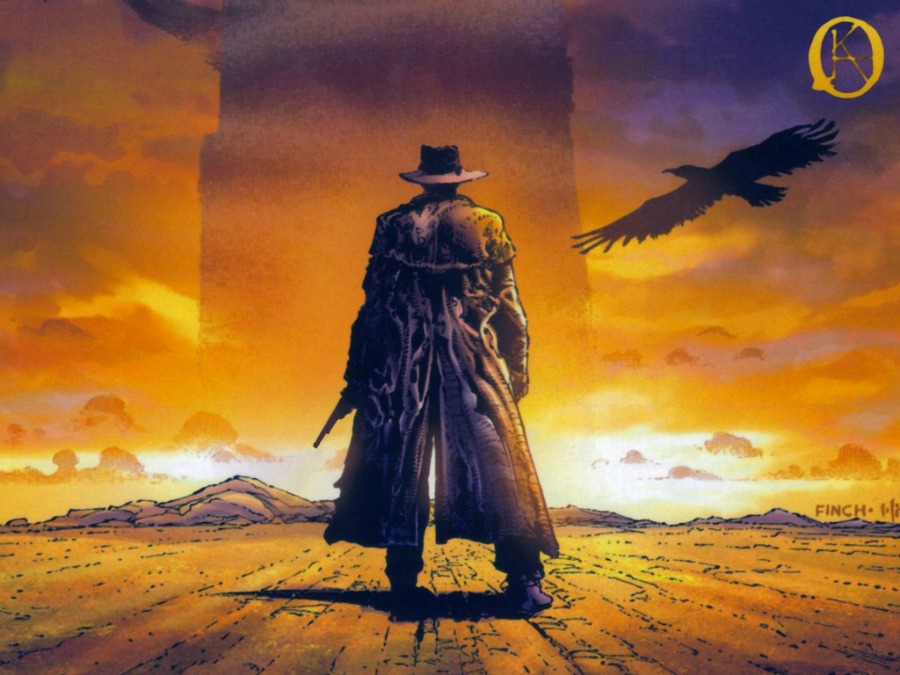 Even if you've never read the books, you probably know Roland is white. He's not just described that way, but he's on all the cover illustrations that way. It's no coincidence that King modeled him after Clint Eastwood from his spaghetti Western days, but as far as the character of the gunslinger goes, the color of his skin doesn't actually matter at all. He lives in an alternate reality to our own called Mid-world. He is a total alien to our own ideas of culture. Simply put, Mid-world does not have the exact same racial history as Earth.

That said, one of the members Roland pulls into his ka-tet is Susannah, a black woman from our world who has a kind of schizophrenia and who spends much of the early part of the series having a severely contentious relationship with Roland, whom she does not trust simply because he is white and she's lived her whole life being given very real and often scary reasons not to trust white men.

Making Roland black doesn't really affect Roland-- it does affect the way Susannah treats Roland, though. There are ways around it. She can hate him for other reasons (maybe she just doesn't trust men in general?) or you can shift a lot of the racial tension toward the other members of the ka-tet, Eddie and Jake, who are (as of now) white. It's not an unsolvable problem, but the casting of any non-white actor as Roland does at least require that the filmmakers find a way to address it.

Okay, so who are we trusting will solve that problem? 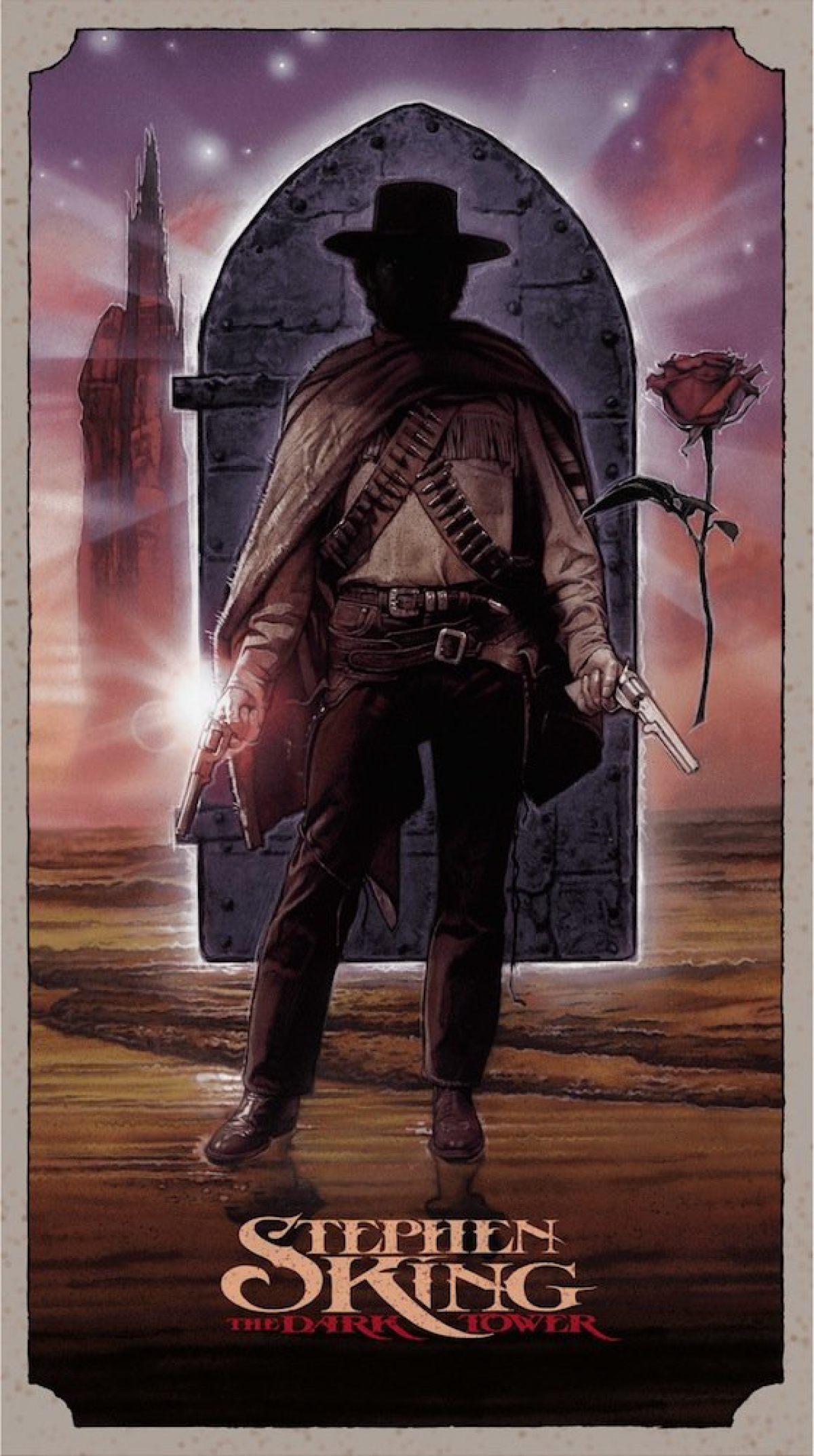 Director Nikolaj Arcel (A Royal Affair) is the captain of the ship and he'll also be taking an official credit as a writer, working off an early draft that Akiva Goldsman (A Beautiful Mind) wrote for previously attached director Ron Howard (who is still producing this). Arcel isn't a household name, but he is a strong director and writer (he also cowrote the Swedish The Girl with the Dragon Tattoo) and so he's an exciting voice to have in the mix.

Geeks are probably a bit more cautious that Goldsman's draft is the foundation for the whole thing, though. When it comes to scripting adaptations, he is notoriously unfaithful to the source material. And if you don't think that's the case, just go read/watch I, Robot or I Am Legend. But, in the case of The Dark Tower, fans need to have a realistic understanding that nobody is ever, ever, ever going to make a blindly literal adaptation of all eight books into eight different movies. The story is just too big and violent and crazy and expensive for that to happen. It would cost a gazillion dollars and basically require anyone involved with that project to be an indentured servant for the two decades it would take to actually film the entire thing.

Condensing plot lines, merging characters, making some of the more radical elements accessible on the big screen IS going to happen no matter what.

So is the first book also going to be the first movie? 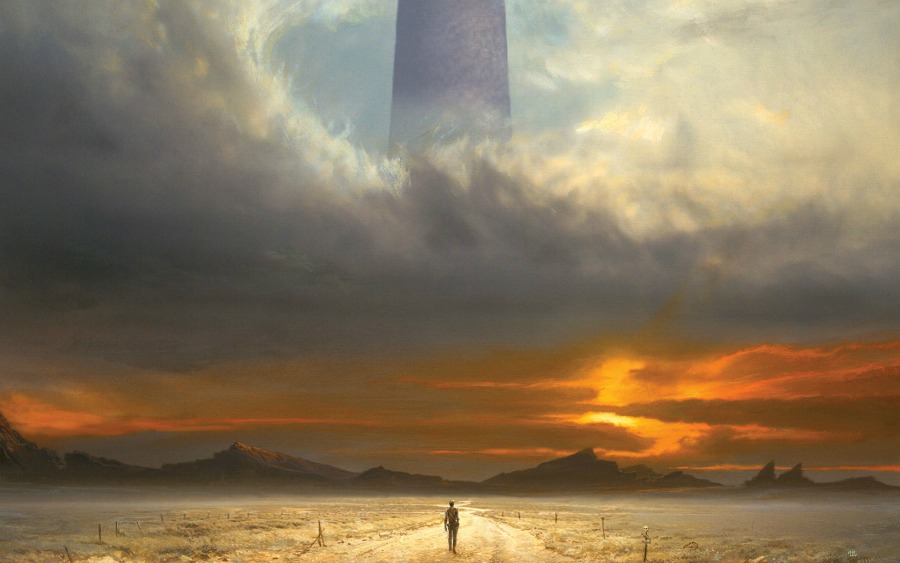 Nope. According to EW's big piece, the first movie is not a strict adaptation of The Gunslinger. Instead, it's apparently a cinematic portmanteau that uses parts from a number of different books. Don't break out the pitchforks yet, though. Stephen King himself isn't very bothered by this. He told EW:

"[The movie] starts in media res, in the middle of the story instead of at the beginning, which may upset some of the fans a little bit, but they’ll get behind it, because it is the story,”

Arcel apparently wouldn't clarify where exactly the story does start now, but he did say "A lot of it takes place in our day, in the modern world." So they could be using more of the second book, The Drawing of the Three, which introduces the members of Roland's ka-tet. Or they could even be going into the third book, The Waste Lands. There's actually a lot of The Dark Tower series that weaves in and out of timelines and worlds, so it not starting in the exact same place isn't really that big of a deal.

Besides, when King first started writing The Gunslinger he was literally in college. He had no meticulous plan for it to become this massively popular, complicated story that would take 30 years to tell. Some of the sequels actually have to go out of their way to reconcile details first established in The Gunslinger because they conflicted with the story he ultimately ended up telling. The filmmakers actually have a benefit King didn't when he started writing it: they know the whole story now. Having that perspective makes charting the course for an adaptation much, much easier.

And if you don't think that's the case, then it must mean you've only ever read the first editions of The Dark Tower series. Even King couldn't resist fixing his own story. Any copy of The Gunslinger published after 2003 has actually been rewritten by King so that it more smoothly works with the rest of the series.

Are they still doing that plan for a simultaneous TV show?

Possibly. If you'll recall, when Ron Howard first came aboard the project, the plan was to do movies with a show between them. That sounds goofy if you don't know the books, but it's actually totally doable. The fourth book, Wizard and Glass, is mostly a flashback to Roland as a much, much younger man. It's one of the best parts of the entire series and is a story so good and so self-sustaining that you could easily draw it out on a TV show and it wouldn't feel exploitative. It actually makes more sense as a TV show.

Now that Arcel is directing a series is still a possibility, but the studio hasn't committed to it yet. They also apparently haven't committed to a certain number of films yet, either. It seems like they'll be waiting to see how audiences react to the first movie before greenlighting the next, which is hardly unusual. 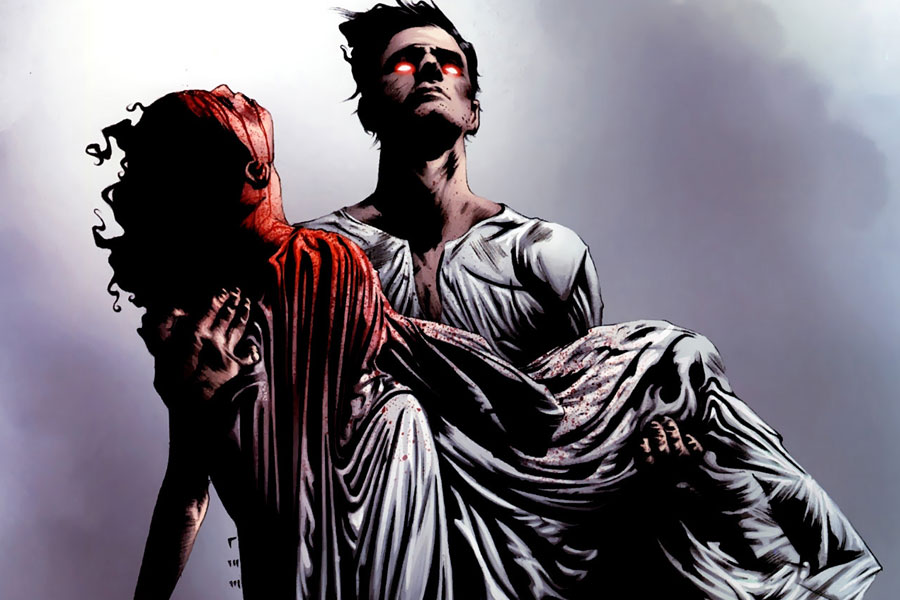 When does the movie actually come out?

As of right now it has a January 13, 2017 release date. That's a worrying date as it means they have less than a year to turn the entire thing around. It's certainly not impossible (the Marvel movies are turned around on a similar time scale), but it would be a bit more encouraging to know they were giving it a few extra months just in case. Release dates shift all the time, though, for a billion different reasons, so don't be surprised if it changes.

Is there anything else I need to know?

Yes. Stephen King has confirmed that while the first movie isn't The Gunslinger, it will start with that book's iconic opening line: "The man in black fled across the desert and the gunslinger followed."

Oh, and you should know the cast are already getting into character.

Time to Get Slimed! Watch the First 'Ghostbusters' Trailer

Time to Get Slimed! Watch the First 'Ghostbusters' Trailer