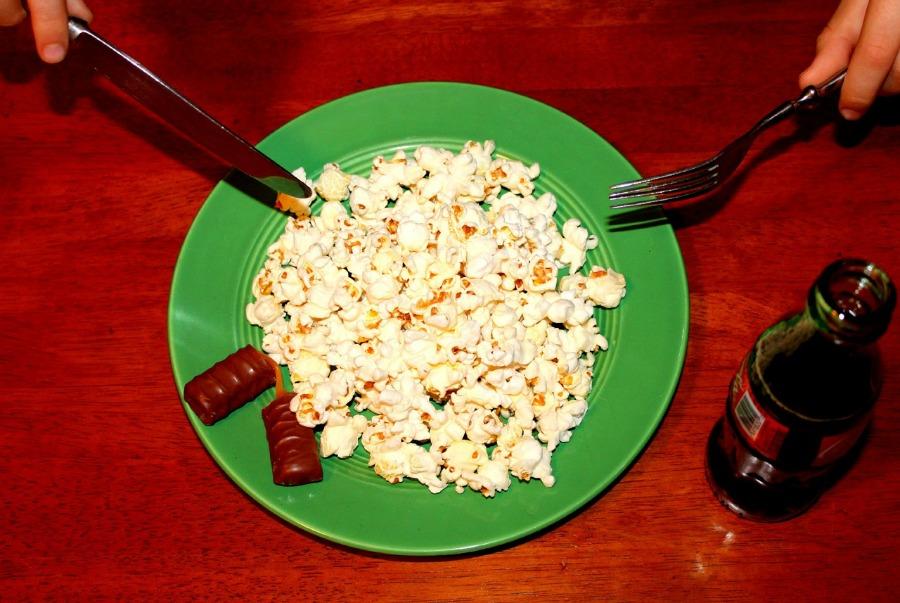 How Popcorn for Dinner Became Our Family Movie Tradition 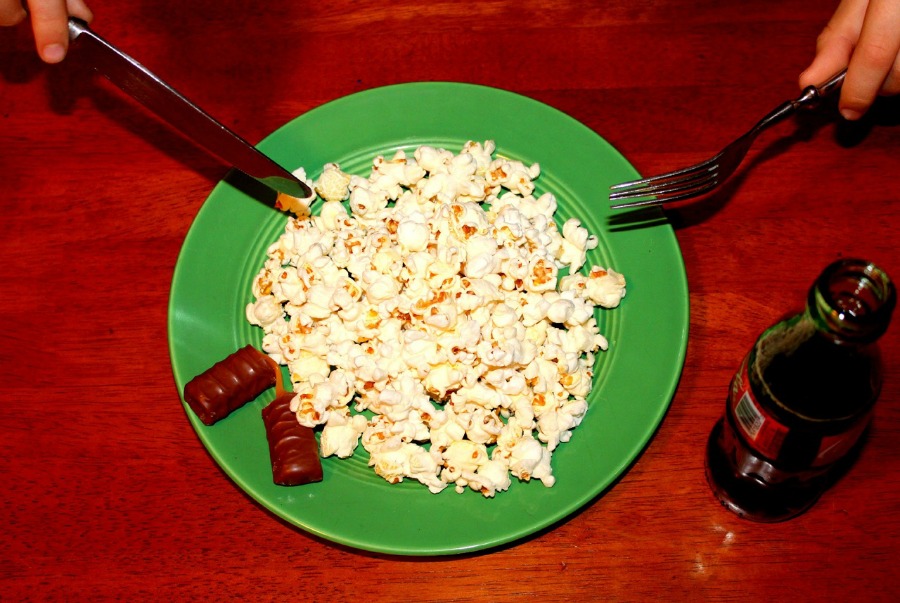 Like many things, it started by mistake. It was a school night, and normally going to a movie would not have been on the table, but there had been promises made and there would be promises kept. We found the earliest showing available, not realizing until we were in the cold, dark theater that dinner had been lost in our pursuit of haste. We were hungry, and on the verge of growing hungrier.

“Let’s all go to the lobby,” I said. Then we stepped up to the snack counter, half of us frustrated and feeling something like embarrassed, the other half ecstatic and on the cusp of sugar-filled bliss.

I’ll let you guess which half I was in.

The boys ordered popcorn, a bucket bigger than their respective heads, loaded with salt and whatever it is that they call butter. They ordered a soda, and they put two straws in it. My wife and I ordered the same, because it came highly recommended. We sent our compliments to the chef.

I know what you’re thinking: You let your kids have popcorn and soda for dinner? What about hot dogs? Aren’t nachos a vegetable? That’s not butter?

Those are great questions, but I must admit that I’m not entirely sold on the theory that hot dogs are any healthier than chocolate bars. Or anything. Also, we are vegetarians.

Then the movie came and the credits went, and we were in the car headed home, talking about the film we had seen and the many reasons that it was way past bedtime.

“We never had dinner,” added the other.

“The popcorn was your dinner,” I replied.

And, “We had popcorn for dinner? That’s the best dinner ever!”

“Don’t get used to it,” my wife answered.

“What’s for dessert?” they wanted to know.

“Can we have a sandwich, too?” asked the hungriest. “Or some cauliflower?”

And so it was that two little boys in their pajamas sat at the kitchen counter on a school night eating the biggest dessert they had ever known: an apple, a sandwich, and bit of steamed cauliflower with not an ounce of salt upon it.

That was a few years ago, and what was once the result of an accident in timing and the pangs of necessity has grown—first into an ongoing joke, and then to tradition. We have had popcorn for lunch, brunch, and many a dinner. Sometimes we have a fairly healthy dessert after the fact, and sometimes we don’t.

This is our dinner theater, and while we, kids included, realize that there are healthier options, we also know that life is better for the few exceptions, and sometimes it is okay to take a night off. The key, like anything, is in the moderation and the steps we take for balance.

Sometimes we stop at the park and play beneath the moonlight, and other nights we drive straight home and carry heavy, shoeless boys from car to pillow. It might be a school night or it might be a summer. It varies, and despite it being something of a ritual, it is fairly infrequent. I justify it as a rarity, and we treasure it for the moments that they will look back on fondly. Memory is a movie, and this is theirs in the making.

Whit Honea is the author of The Parents’ Phrase Book  and his personal website the Honea Express. He lives in Los Angeles with his wife, two sons, and too many pets.

Why Resurrection Isn't Such a Great Idea

Why Resurrection Isn't Such a Great Idea