To offset the Twilight-related content, how about we dip into something a little more … fanboy-ish? Like this wickedly awesome Han Solo Carbonite Desk, which is an actual desk that recreates that famous scene from Empire Strikes Back when Han Solo was frozen in carbonite and shipped off to Jabba the Hutt. The custom designed desk was created by Tom Spina Designs for who we imagine to be a pretty giant Star Wars fan. There's no word on how much something like this costs, though I figure it's probably a little greater than your weekly allowance … so start saving now. 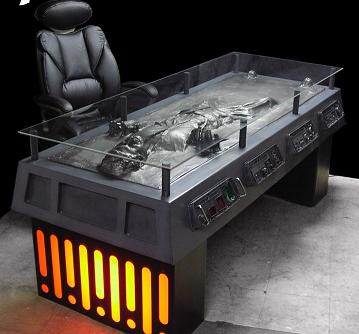 One thing's for sure, though: You put that in your home office and tell the neighborhood kids that that's what happened to the last dude who tried to mess with your property, and I guarantee you'll have kids begging to mow your lawn, like, immediately.
Like it? Share it: