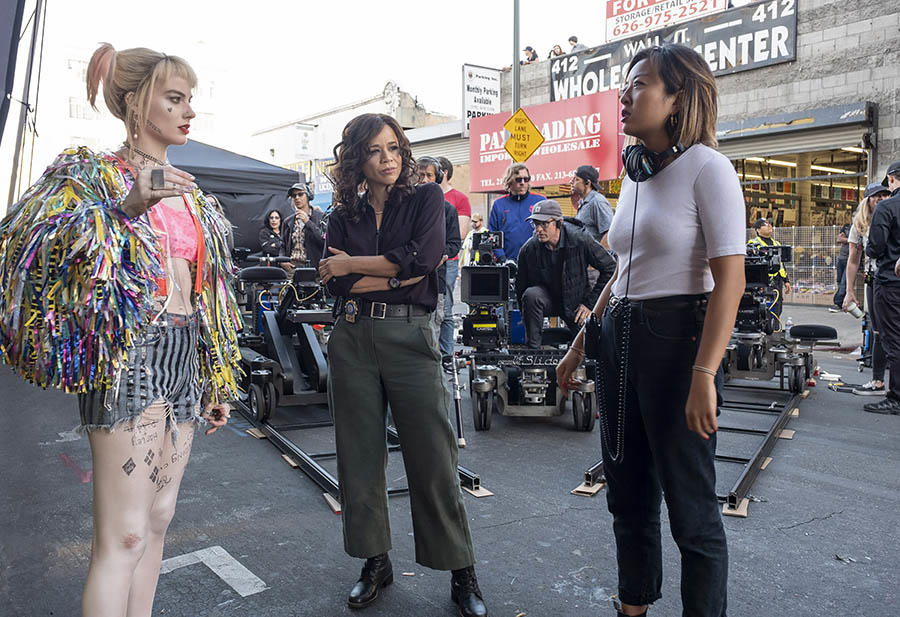 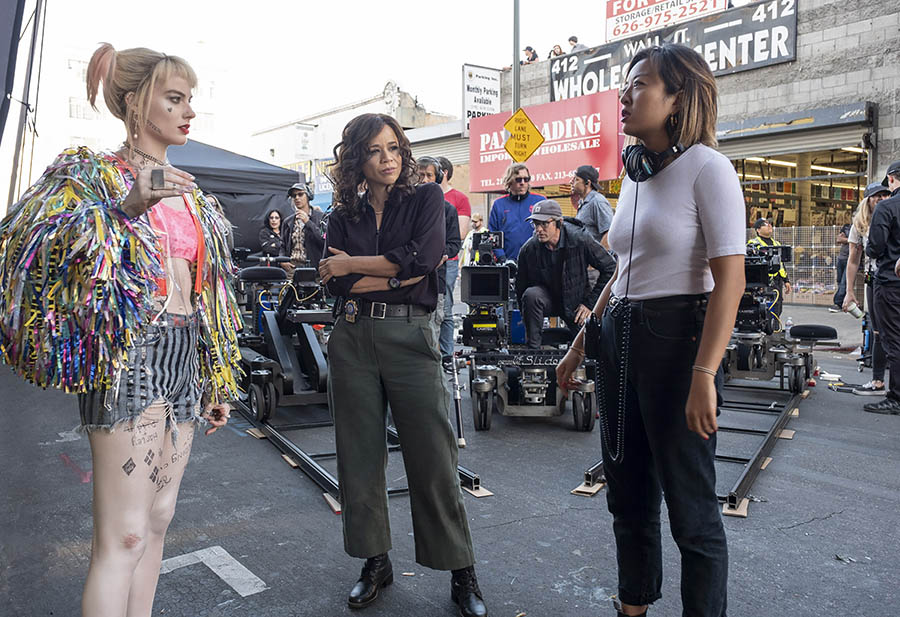 It’s gritty. It’s audacious. It’s smart. It’s funny. It’s ridden with Froot Loops and pink fur. An origin story about Harley Quinn and her girl gang, Birds of Prey (premiering February 7) is not only taking fans inside the wild mind of Harley (Margot Robbie), but to the unseen outskirts Gotham. With one fantabulous Harley Quinn as the narrator, the story explains how Harley and three of Gotham’s most badass women form an unlikely alliance to save a young street kid (Ella Jay Basco) who’s being hunted by mobster Roman Sionis (Ewan McGregor) and his right-hand man Victor Zsasz (Chris Messina) — all of whom you can get to know in our character guide.

After 2016’s Suicide Squad, fans have been chomping at the bit for more of the unhinged and lovable Harley Quinn — but brace yourselves. According to producer Sue Kroll, BOP is unlike anything that’s been done before. “I don’t think it has any similarities to Suicide Squad, except we have Harley at the center… other than that, it’s a standalone story,” she says. “This is so bold.” And when visiting the set in Los Angeles earlier this year, Fandango got an immersive experience and look at what’s in store. What’s Harley’s apartment like? How heavy is her iconic mallet, anyway? What’s her favorite snack? Here are some behind-the-scenes tidbits that you can only get from the Birds of Prey set.

Let’s set the scene. Harley’s messy and eccentric reprieve is a feast for the eyes (and mouth), and as production designer K.K. Barrett says, “a bit of a doghouse she retreats to.” In it, you’ll find a heart pillow, silly string, a pink heart-patterned onesie draped over the couch, and a Porky Pig VHS tape by an old-school TV. “It is a place she likes to curl up on a couch, junk food out, hang out with her hyena and watch TV,” Barrett says. Yes, she has a pet hyena, and its name is Bruce.

Harley’s apartment is a junk food mecca. It’s packed with cheese balls, Hostess sweets, ramen noodles, marshmallows, Twizzlers, cheese whiz, and animal crackers, to name a few. Robbie’s real-life favorite snack of Harley’s? Froot Loops. “They are, like, one of my favorite [snacks],” the star and producer says. “I wasn’t allowed them growing up, and then I moved out of home when I was 17 and I lived on nothing but Froot Loops for, probably, the first three months. Breakfast, lunch, and dinner.” And, fun fact, Robbie notes that Harley eating cereal while watching TV was one of the “key” moments she loved from the comics and wanted to incorporate in the film.

Keep an eye out for the target in Harley’s apartment. Harsh yet feminine, it’s black over a pink, floral print. And it has meaning. “She’s not a shy girl,” Barrett says. “She’s got a bit of a target on her back, so let’s just put it right there.” And she’s not the only one — young Cass also has a (not so literal) target on her which is why and how the Birds of Prey come together in the first place.

No wonder Harley works off all that junk food, that mallet is heavy! After holding it, our guess is between seven and ten pounds. But, there are different versions of the mallet that Robbie films with, according to prop master Andy Siegel. “We have three that are lightweight that are made of rubber,” he reveals. “In Suicide Squad, there was a mallet that was about 25 percent larger, it’s only in one shot — it’s ridiculously heavy, stupid heavy.”

To truly capture the essence of the film, reporters were played a preview reel with film footage, played against a song, “She’s Batsh*t Crazy.” Director Cathy Yan selected it for a camera test to get the “mood and vibe” of the film, though we were told it hadn’t been decided if it would be in the actual movie. Regardless, it was funny, nuts, and perfect. “It gives you a great sense of the attitude,” says producer Sue Kroll.

Predicted to be the Halloween costume of choice in 2020, Harley’s iconic caution tape jacket actually has a deeper meaning. “Harley’s innately anarchic,” says costume designer Erin Benach. “She lives in the boundaries where others dare not go. The caution tape married with the playful metallic fringe says, ‘I’m fun, but don’t cross me.’”

After breaking up with Joker, Harley is a “mess,” according to Robbie. Though the actor admits their relationship “always did confuse [her] the most” and “took [her] the longest to get [her] head around,” this film changed her perspective. “I actually understand the breakup. That’s something I feel like everyone can understand and relate to in some ways,” Robbie says. “Even though she blows things up. Like, I don’t do that,” the actress says with a laugh regarding Harley’s actions after the breakup. “I understand the motivation.”

At one point, fans will see Renee Montoya (Rosie Perez) the law-upholding, Gotham PD detective in a shirt that says, “I shaved my balls for this.” The film’s costume designer says it’s “at her lowest point, she is literally dumped on my a pile of garbage and stuff and is forced to wear this sad t-shirt that was found in the lost and found… for now.”

The beaver doll, named Hatta, wears a pink tutu, candy necklace, and nail polish. “It had to look aged and loved. It’s been through a lot,” says the film’s prop master. Hatta originally wore a tiara. Although details about Hatta are kept under wraps, we have a sneaking suspicion it’s one to keep an eye on.

This is an even grittier part of Gotham, and one fans have yet to experience.“Harley’s is a bit more street gutter,” says the production designer. “If this was Manhattan, she might be from Queens. We’re gonna see a different side.”

One of the areas the Joker tends to hang out in, Amusement Mile is comparable to the Oogie Boogie man’s lair in A Nightmare Before Christmas. Like a twisted carnival funhouse, it’s comprised of trampolines, moving floors, a massive slide, and dynamic female cartoons everywhere. According to the production designer, it’s “wild fun.”

Gotham’s controlling, sleek, sinister mobster (played by McGregor) has multiple domains that fans will explore. One is his own Black Mask lounge, where he runs the show and operates his shady business. Canary (Jurnee Smollett-Bell), one of the BOP, is his favorite singer there. His home has massive, larger-than-life red speakers and collectibles like acupuncture statues and savagery of shrunken heads and masks hanging on the walls. He “has to have stuff no one else can get their hands on,” says the costume designer.

Roman’s personality is reflected in every detail of his character, even including his pills. He has “custom-made pill dispensers with custom-made pills… they’re for fun,” says the prop master. Some of his pills take form in shapes of skull hearts, diamonds, dice and lips.

Can audiences expect some? Abso-freaking-lutely.“I think there are some. And certainly, we pay homage to the comics,” says director Cathy Yan. “It does sit within the comics… everything we do is still inspired by the comics.”

When pulled to chat with reporters directly off set, Robbie was donning tons of gold rings, dirty knuckles, pig tails, jean shorts, and a white t-shirt with “Harley Quinn” printed all over it. “It’s kind of like jewelry weaponry. Knuckle dusters,” the actress comments of her jewelry. Harley also has brass knuckles with pink fur because everything she has is decorated. “Harley’s kind of all over the place,” says the prop master. “She spends a lot of time drawing on bats, drawing on mallets.”

On set, there was a massive, cartoonish looking TNT ball made of rubber bands. Fun fact, it actually bounces like the rubber balls from gym class.

Like Harley’s bats, mallets, and general belongings, Cass wears a cast with a ton of drawings. And according to the film prop master, it went through many versions before the final cast was chosen. Ella Jay Basco spent time on set making cast after cast, and one version even had the f-word written right across the front of it. Ultimately, Yan chose the one she liked the most (and the f-word didn’t sway her one way or the other).

This is a theme in the film, and it isn’t just Harley who’s emancipated through the journey. “She doesn’t necessarily make friends with the other women,” explains Yan. “They come together and all sort of emancipate themselves throughout the film.” Producer Bryan Unkeless says they’re all “emancipating themselves from something, whether it’s circumstances, some patriarchal system or an emotional relationship.”

It looked like BOP was as fun to make as it will be to watch. While observing a scene being shot on set, Robbie and the women cracked up between takes sometimes bent over belly-laughing. Robbie danced around and did a body roll, joking, “I don’t take myself very seriously, but I do take my craft seriously.” To which one of her co-stars responded, “I like your commitment.” Robbie later joked about “getting drunk with you ladies… to see what it would be like” in real life. We imagine it’d be a great time.

Next Article by Taylor Ferber