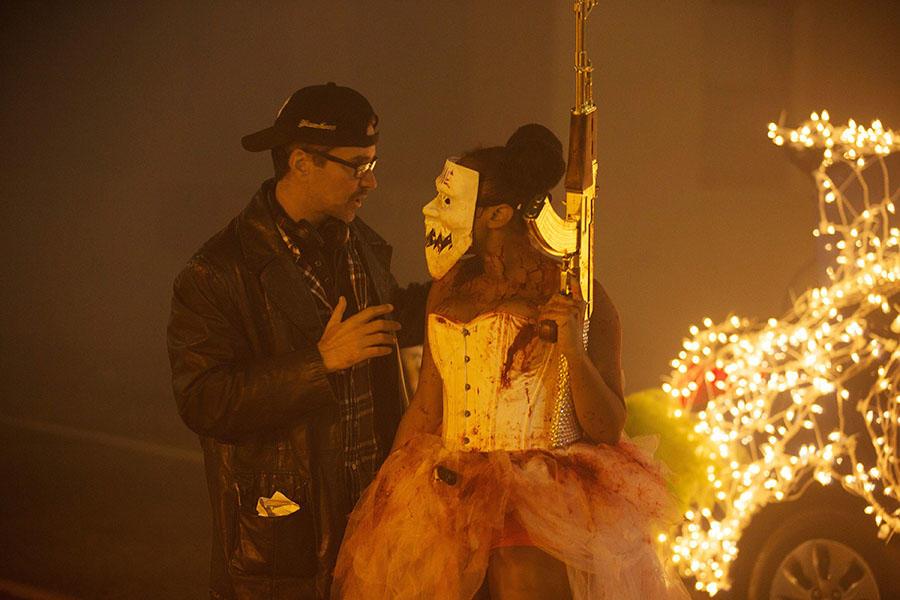 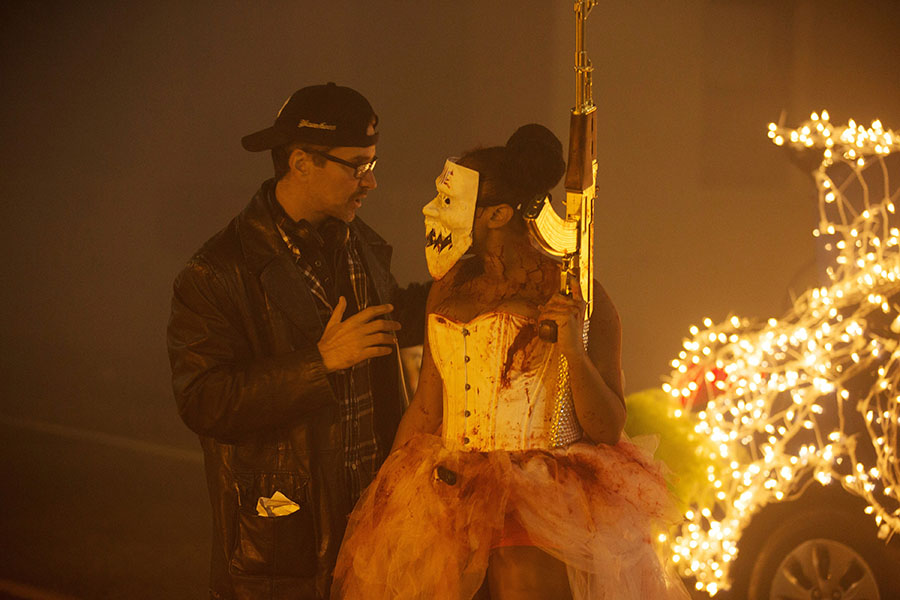 James DeMonaco (above, left) is the writer-director behind all three Purge movies, each centering on an annual government-instituted night during which all crime—including murder—is legal. The first, The Purge, looked at a family captured in a hostage situation, while the second, The Purge: Anarchy, focused on a group of people caught outside in Los Angeles on Purge night. The timely third in the series, The Purge: Election Year takes the action to Washington, D.C., where a senator who wants to abolish Purge night becomes an assassination target.

We caught up with DeMonaco as The Purge: Election Year arrives home on Blu-ray and DVD (October 4; now available online on FandangoNOW). The New York-based writer-director talked candidly about what inspired the Purge movies, what freaks him out about politics, and his three favorite scary movies. 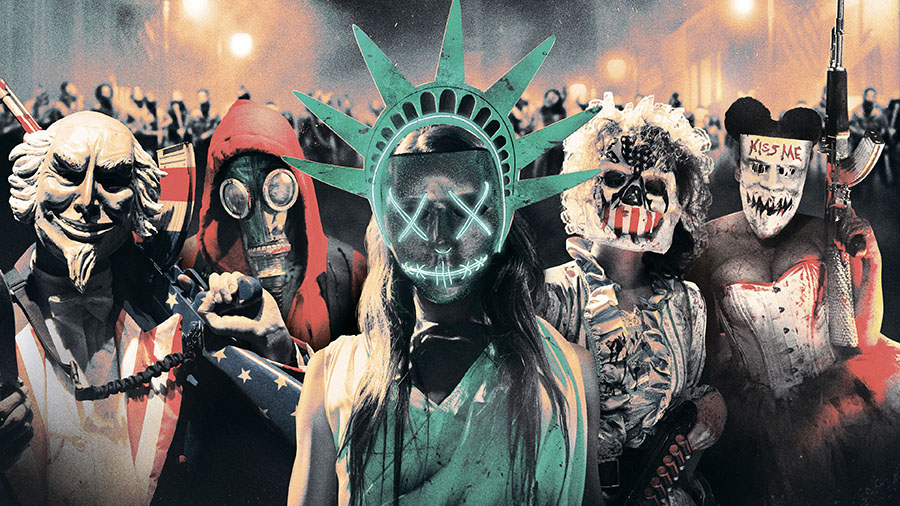 Fandango: The Purge movies challenge viewers to ask themselves what they'd do if their government encouraged them to prey upon the most vulnerable people in society. Where did the inspiration for the movies come from?

James DeMonaco: I grew up in Brooklyn and Staten Island, New York where you're around a fair bit of violence. I'm not a violent person or trying to be a tough guy, but you're around it. I lived in Paris for over eight years and everything changed. I noticed how they have a different relationship with guns and violence than we have. I put a microscope on my own life and became obsessed with that.

Also, my wife and I were in a road-rage incident in Brooklyn where we were cut off by this drunk guy who almost killed us. The cops showed up; it was crazy. She said in anger—and this is a doctor who helps people—"I wish we could all have one free one a year." I was like, "Whoa, honey!" It stayed with me.

Then Katrina happened, and the lack of response blew me away. All those things kind of became this melting pot—this perfect storm—for me to come up with this idea of a legalized annual holiday of violence. 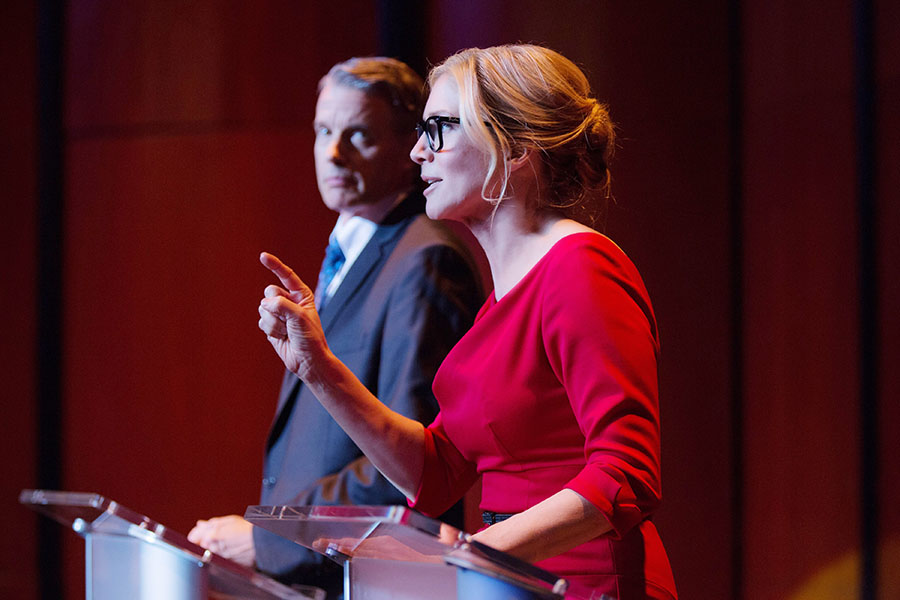 "If two people leave the theater and say, "S**t, I can't vote for Trump now," that would be wonderful."

Fandango: You wrote the The Purge: Election Year long before you knew who the presidential candidates would be in 2016. Do you think the movie could be viewed as a cautionary tale about life in America under President Trump?

DeMonaco: I hope it does, man. Like you said, I had no idea because I wrote the script in 2014. I knew about Hillary, but I didn't know about Trump. People take what they want from a movie and see what they want, but I hope people see the bullying tactics and what someone with this kind of fear and hatred could impose upon a society. I don't have lofty expectations about what the film can do, but if two people leave the theater and say, "S**t, I can't vote for Trump now," that would be wonderful.

Fandango: Each film in the Purge trilogy gets bigger in scope. Is the next step to explore it on a global level, or is this the conclusion of a trilogy?

DeMonaco: For me, it's the conclusion of my trilogy. It's the story that I wanted to tell. There is talk of part four, which I wouldn't direct but would like to be part of—if not writing it then as a producer sort of guiding it so it doesn't go off the rails. We fear with The Purge is that it could easily go off the rails and become exploitative. There has been talk about an overseas Purge or a prequel, which was my idea, so we can show the inception of how this all began. 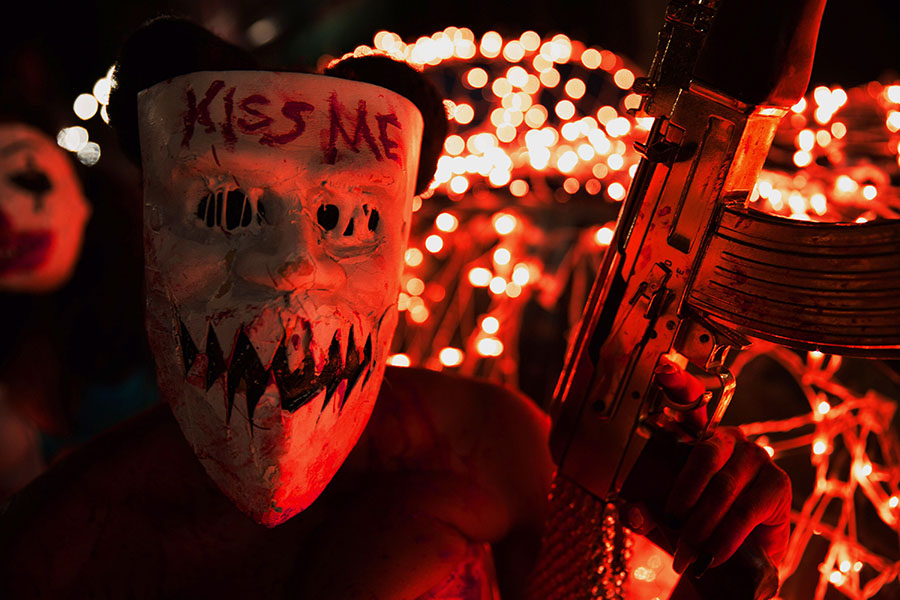 Fandango: The Founding Fathers are portrayed as extremist religious psychopaths in The Purge: Election Year. Do religion and politics freak you out?

DeMonaco: Yeah, I think there has got to be a separation between church and state. Any kind of view that is taken to an extreme and doesn't allow for other viewpoints to enter into it is very scary to me.

Fandango: Elizabeth Mitchell plays a senator running for president who wants to stand up against the Founding Fathers. She is a beacon of light in a movie about political corruption. Do you feel politicians like her are in the minority?

DeMonaco: Is she the minority in the Purge world? Definitely. In our world? Yes! [Laughs] Listen, I guess I'm very pessimistic when it comes to politics right now. That kind of person with ideal values and not breaking from them—she makes a grand stance at the end that she doesn't want this terrible human being to be murdered who is out to kill her—I don't think we see that often. 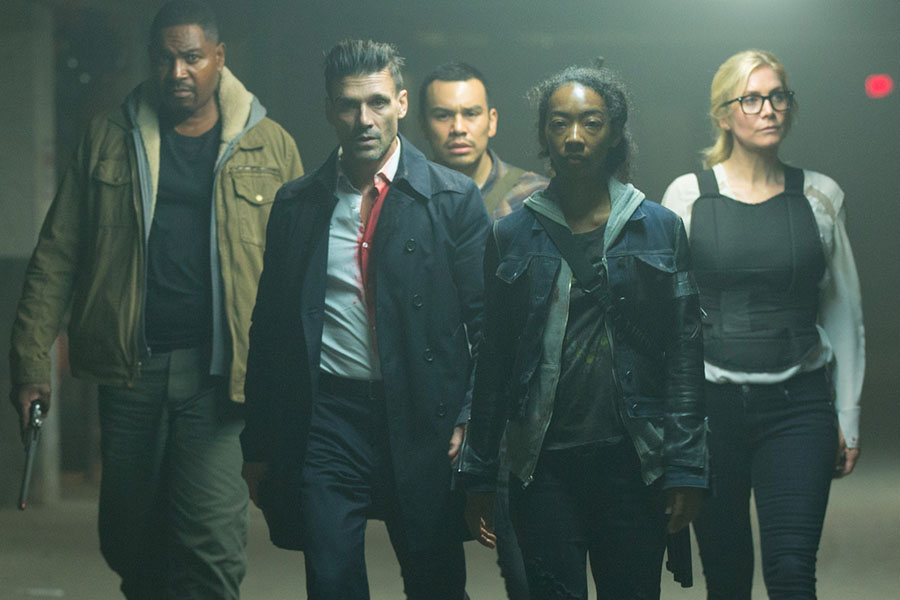 Fandango: Will you talk about the characters that return from the previous movies and why you picked them?

DeMonaco: Well, Frank [Grillo] is just someone the studio and audiences loved. Truth be told, the story could be told without [the senator's] bodyguard and head of security being that character from part two. So it's not a direct continuation of telling the Leo Barnes/Frank Grillo story, but we loved him so much that we wanted to bring him back. He was game to say that he'd be part of an ensemble and the movie doesn't have to be just about him. I thought that was very cool of Frank.

As for Edwin Hodge, who plays the stranger in part one, I thought it would be cool if he was the one character who appeared in all three films. He's the guy whom Ethan Hawke's family takes in, takes hostage, and then saves. He then ends up becoming the head of the revolution by the end of the third film. 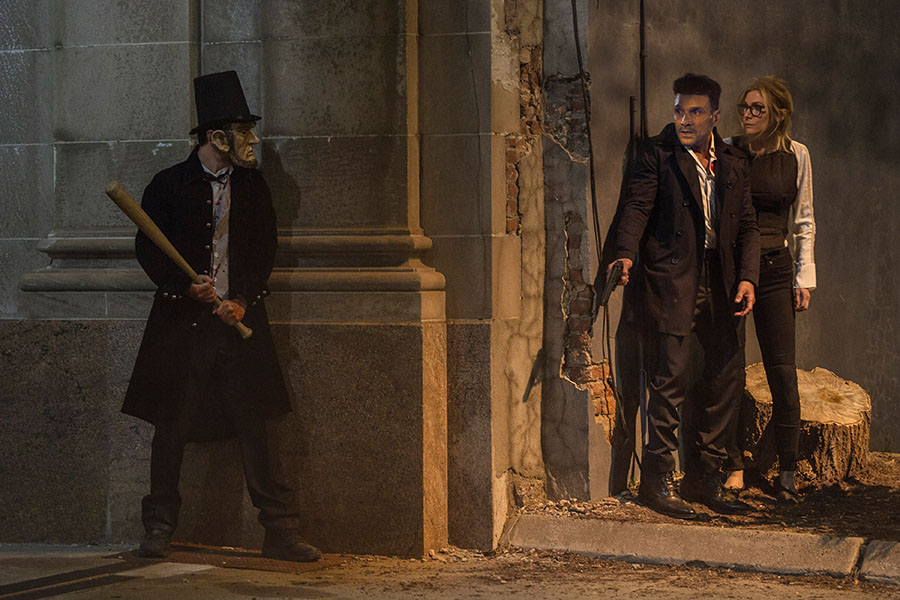 Fandango: Underlying all the Purge movies is a statement about class division in this country, about the haves and have-nots. In Purge: Election Year, a young girl is ready to kill for a candy bar. Why is this an important topic for you?

DeMonaco: I guess as a writer and filmmaker, you are trying to put a mirror up to a society that you see on a daily basis. From my viewpoint here in New York City, you see this great class-race struggle in our society—even when we have an African-American president. We haven't taken the appropriate steps we should have taken over the past 30 years. You wonder with the police shootings now if the problem is getting even bigger in our society.

Fandango: You are the first writer-director of an original trilogy to direct all three films in a franchise. What projects do want to do next if the Purge is purged from your schedule?

DeMonaco: I have two things I want to do, specifically. One is a genre piece, and I adapted the screenplay from a really great novelist named Brian Evanson. The novel is coming out on April 4, so hopefully we'll turn that into a movie. It's a horror-action love story that's a bigger canvas than The Purge.

I also have a smaller, indie-minded story that I'd like to do. It's outside the genre, sort of in the Stand by Me mold.

But I hope The Purge does go forward so that I can guide it and keep it on the same path. It's too hard to walk completely away from it, and I have more to say. It's just that we made three movies in four years, and they're not the easiest movies to make—they're bound by budget and you try to do the most with that.

Fandango: The Purge to you is kind of like zombie movies to George A. Romero. You both use the genre to explore social and political commentary.

DeMonaco: Yeah, and George was a huge inspiration. I grew up with Dawn of the Dead. Scorsese calls it "smuggler cinema" when you smuggle ideas into genre pieces. No one did that better than George and John Carpenter back in the day.

Fandango: What are your three favorite scary movies?

DeMonaco: Hands down, The Exorcist. I can't even turn it on. It might just be because I'm an old Italian Catholic, but if I put that movie on, I won't sleep for a year. Rosemary's Baby, just because I think it's brilliant and it gets under my skin. And the third one would be this TV miniseries that made this odd impression on me because I saw it way too young. It's called Helter Skelter, with Steve Railsback playing Charles Manson. It knocked me over and really freaked me out.

The Purge: Election Year as well as The Purge and The Purge: Anarchy are all available on Blu-ray, DVD and FandangoNOW.

'Under the Shadow' and 7 More Horror Movies Set During Wartime

'Under the Shadow' and 7 More Horror Movies Set During Wartime