DVD of the Week: 'Taken'

When you think of Liam Neeson, "action star" doesn't immediately come to mind, as much as "serious Irishman who somehow brings credibility to roles like Qui-Gon Jinn in The Phantom Menace" or "serious actor who makes movies about the Holocaust and Irish revolutionaries." This time, however, he brings a much-needed gravitas to Taken, which would have been a far more ridiculous action flick without his chops. 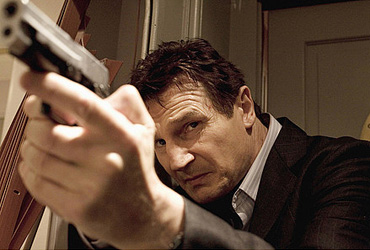 "Go ahead -- make my week."
Neeson's great--and believable--as Bryan Mills, a CIA agent estranged from his daughter. When she's kidnapped by an Albanian sex-slave ring, Mills goes into high gear to get her back, whether it's escaping his own death with a fire extinguisher or torturing folks in the name of family. Highbrow entertainment it isn't, but there's nothing wrong with a satisfyingly ludicrous thriller once in awhile now, is there?

Underworld: Rise of the Lycans The always-intense Rhona Mitra steps in for Kate Beckinsale in this prequel that explains the origins of the feud between werewolves and vampires. Worth checking out if you're a fan of the other two films. Plus, the entire trilogy is available in a new box set.

Passengers Anne Hathaway might be seeing dead people in this supernatural thriller about a plane crash that's sort of like if M. Night Shyamalan directed Final Destination.

Star Trek: The Movie Collection This set includes the first six Star Trek films, digitally remastered in high-def with 14 hours of special features, 2-1/2 of which is all new, plus a bonus disc ("The Captains' Summit") with William Shatner, Leonard Nimoy, Patrick Stewart and Jonathan Frakes talking about life on the set and their favorite moments.

Scoop This: Will Smith to Join '20,000 Leagues,' Sam Jackson Deals with Pirates

Scoop This: Will Smith to Join '20,000 Leagues,' Sam Jackson Deals with Pirates