DVD of the Week: 'Sweeney Todd'

From Stacie Hougland: If you enjoyed Tim Burton’s stylized cannibal tale Sweeney Todd: The Demon Barber of Fleet Street starring Johnny Depp and Helena Bonham Carter as Gothic-horror partners in crime, the 2-disc DVD that comes out today is a little slice of heaven you’ll want to gobble right up.

This movie version of Steven Sondheim’s classic stage musical tells the tale of a Victorian-era barber named Sweeney Todd (Johnny Depp) who is happily married with a new baby, until he’s unfairly framed for a crime by one Judge Turpin (Alan Rickman), who happens to covet Sweeney’s wife. Banished from London for 15 years, Sweeney returns only to find his wife dead and his daughter in the hands of the evil judge. Crazed with cold and deadly fury, the now pasty-faced, bed-headed Sweeney sets out to exact a dreadful, bloody retribution on his enemies (as well as the general populace) with the help of his beloved shaving razors and his former landlady Mrs. Lovett (Helena Bonham Carter), who bakes Sweeney’s victims into meat pies and serves them up to her hungry, unsuspecting clientele. 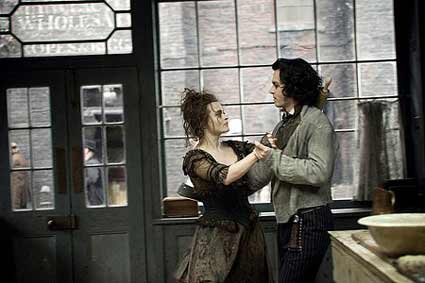 This pair cuts more than just a rug in their charnel house of pies.

Darkly macabre and shot through with humor as black as pitch, Sweeney is even better the second time around, as I caught lines in the songs I missed in the theater. Critics were fairly divided over the principals’ ability to carry off Sondheim’s difficult, discordant tunes, but they all do quite well considering the lack of formal training. The acting is all top notch, and if you’re a Burton fan, he outdoes himself. The film’s fantastical sets and artistic direction translate to DVD beautifully, and you’d never believe a film with such dark tones (other than blood-red splashes of color) could pop like this until you see this anamorphic widescreen transfer yourself.

This DVD’s meaty extras include a couple of standout bonus features, like "Sweeney is Alive: The Real History of the Demon Barber," an examination of the fact and fiction behind the legend. Was he real? Was he a witches’ brew of serial killers of the time? Complete fiction? I particularly enjoyed “Sweeney’s London,” a look at Industrial Era London. “A Bloody Business” is an excellent featurette on the technical side of creating Sweeney’s horrendous crimes on-screen. If you don’t know "Grand Guignol: Theatrical Tradition," that featurette will introduce you to the macabre, violent French movement that horrified and entertained audiences from 1897 to 1962. And that’s just scratching the surface.

Win in Our 'Titanic' Movie Contest!

Win in Our 'Titanic' Movie Contest!