A tightly wound thriller that keeps the twists coming, State of Play stars Russell Crowe as a scruffy, shoe-leather investigative journalist whose ethics conflict with his friendship with a married congressman (Ben Affleck) who's caught in a sex scandal made worse when the mistress turns up dead. As the coincidences pile up, things become more and more confusing, and Crowe unwillingly finds himself hooked up with the paper's new star blogger-cum-reporter to get to the bottom of it. Keep an eye out for a terrific Jason Bateman as a sleazy PR hack and Helen Mirren as a tough-as-nails newspaper editor. 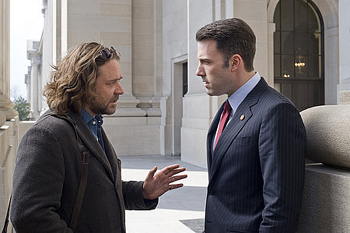 Earth Stunning visuals set this wildlife documentary sky-high above others (yes you, March of the Penguins) that tells the beautiful if often sad circle-of-life story starring lions and birds and elephants, oh my. The only drawback is James Earl Jones's lame narration.

Sin Nombre A young girl traveling from Honduras to the States with family hoping for a better life meets a tattooed gangster on the run from his own homies. Far from being a meet-cute romance, it's a brutal, unforgiving look at the danger and poverty involved in illegal immigration.