OK, so normally I stick to covering movies in this blog, but I just had to let you all know about  this awesome box set Universal released this week on DVD and Blu-ray of the Sci Fi (now Syfy) Channel's remarkable TV show. With more than 4,000 minutes on 20 Blu-ray or 25 SD discs, plus loads of special features, you may not leave your couch for weeks. If you aren't familiar with the show, it featured some of the best special effects on TV (and often better than some movies), tremendous acting and a storyline so smart and complex it made science fiction on TV more than just geeky "Star Trek" cheese and launched Sci Fi as a reputable cable channel. 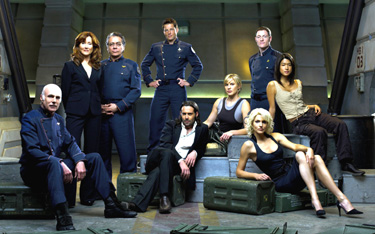 The story involves a fleet of humans (the 12 Colonies) on the search for Earth after their home planets were destroyed by Cylons, a human-created race of humanoid robots that turned on their makers. Battlestar Galactica is the lead ship protecting the smaller ships and manned by Cmdr. William Adama (Edward James Olmos).  The initial Cylon attack drew from 9/11 fears, and since its premiere in 2003, the show has tackled such topics as racism, terrorism, torture, religion and politics without being too overbearing, and maintaining the sense of fun and adventure sci-fi fans crave. 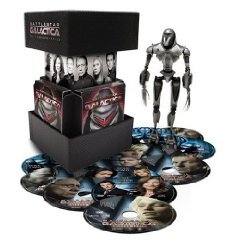 The set includes every episode including the finale, plus an extended version of "Battlestar Galactica: Razor" that never aired and deleted scenes; "The Oracle" interactive guide to the ships and characters; a glossary of terms; quizzes; behind-the-scenes featurettes and more. "The Manifesto Destiny" is a fascinating look at series creator Ron Moore's vision. It's all packaged in a square black limited-edition "telescoping" box with a Cylon action figure encased in the lid.