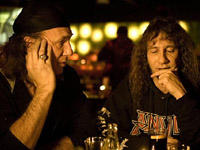 DVD of the Week: ‘Anvil! The Story of Anvil.’ Plus: Win ‘Snow White’ Collectors Set and Blu-rays!

Before you dismiss this aging-rocker underdog tale as just another Spinal Tap, give it a closer look and you’ll see a heartwarming and inspiring story about two guys who can’t imagine not pursuing their dreams of stardom despite years of evidence that they shouldn’t. 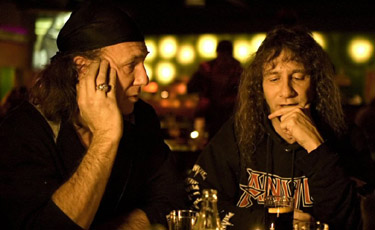 You probably have never heard of this band, even though it’s 1982 album was a thrash-metal landmark that set the speed for bands to follow: Metallica, Anthrax, Slayer, Megadeth. But while those bands went on to massive success in the ‘80s, it never happened for these guys—though it should have, as musicians like Lars Ulrich and Slash attest in the doc. Instead, now in their 50s, they hold delivery jobs and play gigs with few attendees. Even so, you’ll still find yourself rooting for Anvil to succeed.
Also new this week:
Year One What you expect is pretty much what you get. If your expectations are low, you might find this one, starring Jack Black and Michael Cera, right down there with you—laugh at the dumb jokes anyway.
Imagine That Eddie Murphy’s latest debacle that has something to do with his daughter seeing dead people who save his career.
My Life in Ruins Cliché-ridden goop starring that Greek Wedding chick who sells packaged holiday tours and finds true love in the souvenir shop. A true in-flight threat if there ever was one.
Two Dr. Seuss classics, new on Blu
How the Grinch Stole Christmas  (1966) The Chuck Jones animated classic narrated by Boris Karloff comes to vivid, brilliant life on BD for the first time, and never looked better in its 40-year lifespan. Pass the roast beast and serve this wonderful film up to fans young and old at the holidays.
Horton Hears a Who (1970)  This new BD version breathes new color and life into the original production about an elephant who saves the tiny town of Whoville, and Chuck Jones's animation looks fantastic. Extras that should entertain the little ones include a celebrity skit-filled 90-minute look at Dr. Seuss and an animated short based on a story published after Seuss' death.
Now for the good stuff: 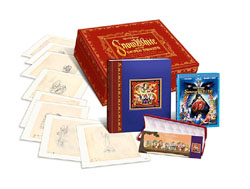 New on Blu-ray for the first time is Disney’s classic Snow White and the Seven Dwarfs, and have I got some prizes for you….
Grand prize: The Limited Edition Diamond Collection Set includes: Diamond Edition Blu-ray Combo Pack with DVD copy, 8 lithographs of original animation drawing used in the making of the movie, exclusive character pin set, 160 page bound book that is a Chronicle Of The Art, The History, And The Magic Of Walt Disney's Masterpiece" and a certificate of authenticity.
Five runners-up will receive the Blu-ray combo pack with DVD.
How do you win? Comment below and tell me who your favorite Snow White character is. Easy as that! Winners will be selected at random and chosen by next Tuesday, Oct. 13.
Like it? Share it:

Yay or Nay: I Kissed a Vampire – The Musical

Yay or Nay: I Kissed a Vampire – The Musical