August 9th 2013, 4:04 pm
Neil Patrick Harris, John Lithgow and Amy Poehler were revealed as some of the famous faces who will be lending their voice talents to upcoming Pixar feature films. John Lasseter served as emcee on the first day of Disney's D23 Expo in Anaheim. The animation presentation was split up among three different divisions: Pixar, Disneytoons and Disney Animation.
Here are the highlights from the Pixar portion of the presentation:
Following an opening announcement from CEO Bob Iger (who said there won't be any Star Wars revelations), Lasseter took to the stage. He presented the new Monster University short film Party Central, which will play in front of The Good Dinosaur.
The Good Dinosaur was the first film out of the gate. Director Pete Sohn took to the stage to describe the film for the 4,000 Disney fans in attendance.

- The film imagines what would happen if the asteroid that has famously been theorized to have killed off the dinosaurs missed Earth.
- The dinosaurs are farmers. Each one has a particular purpose, i.e. stegosaurs harvests grains by cutting them with its spikes tail, a tricerotops uses its massive head as a bulldozer.
- Story focuses on Arlo, an aloof youngest sibling of an apatasarus family who use their long necks for plowing fields. He is voiced by Raising Hope star Lucas Neff.
- John Lithgow voices Arlo's father, Frances McDormand voices his mother, Bill Hader and Neil Patrick Harris voice his brothers Forrest and Cliff, and Judy Greer voices his sister Ivy.
- One day Arlo discovers a strange-looking insect on the farm only to discover that it isn't an insect at all, it's a young cave child. The child's name is Spot, so named because of three yellow dots on his forehead.
- Arlo and Spot set off on a journey (what prompts them on that journey wasn't fully revealed) and together they form a friendship.
- The Good Dinosaur is due in theaters May 30, 2014.
The next film was The Untitled Pixar Movie That Takes You Inside the Mind, which Lasseter revealed the new and much shorter title for: Inside Out.
- The film centers on an adventurous, happy, hockey-playing 11-year-old girl named Riley whose family moves to San Francisco.
- There are five emotions that are featured inside of Riley's "head"quarters. Anger voiced by Lewis Black, Disgust voiced by Mindy Kaling, Joy voiced by Amy Poehler, Sadness voiced by Phyllis Smith from The Office and Fear voiced by Bill Hader.
- Yes, Bill Hader is in two upcoming Pixar movies. He also voiced the slug in Monsters University.
- Following the move to a new city, tensions being to rise inside the "head"quarters that ultimately result in Joy and Sadness being cast "into the far reaches of Riley's mind."
- It is during this banishment that we see other areas of Riley's mind, all of which look and sound like new areas at a Disney theme park. There's Long-Term Memory, where literally every memory Riley has ever made is stored. The place is also a bit of a mess. Imagination Land bears a resemblance to Disneyland while Abstract Thought distorts the characters into Picasso-like paintings. Finally, there's Dream Productions, a studio lot where dreams are improved and filmed nightly.
- The audience was treated to a storyboard sequence with the actors voicing the characters. In the clip, Fear, Anger and Disgust are watching Riley while she's at the dining room table eating dinner. We see inside her mother's mind (a group of middle-age female characters who chatter like they're at the hair salon) and her dad's mind (currently distracted by the memory of a recent hockey game.) Anger, Fear and Disgust are trying to pretend they're Joy and have Riley respond to her mom's probing questions about school. Needless to say, each one of them fails, resulting in Riley's dad "putting the foot down." A humorous and very entertaining sequence, the Arena crowd loved it.
- Inside Out is due in theaters in June 19, 2015. 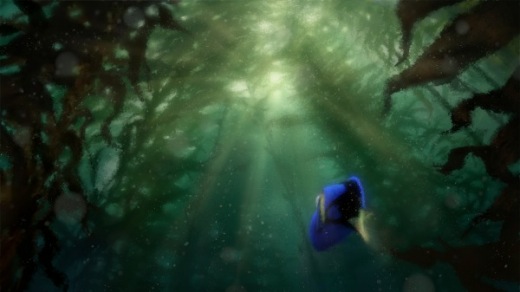 The third Pixar presentation was Finding Dory. Director Andrew Stanton took to the stage to talk about the film.
- The sequel takes place about a year after Finding Nemo ended and finds Dory living peacefully with Nemo and Marlin. That peace is shattered though when a "traumatic event" sends Dory into the wide open sea to search for her family. When she finds them, "she discovers that her family is a lot bigger than she originally thought."
- No, that's not sneaky talk to suggest that Dory was raised by whales... we don't think so, anyway.
- Diane Keaton and Eugene Levy were announced as the voice actors playing Dory's parents while Modern Family and Muppets Most Wanted star Ty Burrell was announced as the voice actor for a Beluga whale named Bailey. think of Bailey as the new Crush (the totally awesome sea turtle from the first film, dudes).
- You might notice that Bill Hader's name is missing from the casting announcements. That's because he's not in the film, thought its not for a lack of effort. Hader walked out onstage dressed as a sea cucumber, begging Stanton to put him in the film.
- Hader said that he wanted to become Pixar's new lucky charm by starring in his fourth Pixar movie. That's when John Ratzenberg's voice echoed through the arena and moments later, the actor walked into stage accompanied by a marching band.
- Ratzenberg and Hader performed a brief comedy skit. (Hader also took the stage for his other two films to perform skits with Judy Greer and Lucas Neff for The Good Dinosaur, Smith for Inside Out and Lasseter for Monsters University.)
- Ratzenberg boasted that he's starred in 14 Pixar movies to date. We then saw a quick sizzle reel of all the characters he's voiced in Pixar movies.
- Finding Dory is due in theaters May 30, 2015.
The final Pixar offering was the first 10 minutes of a Toy Story Halloween TV movie, Toy Story of Terror. 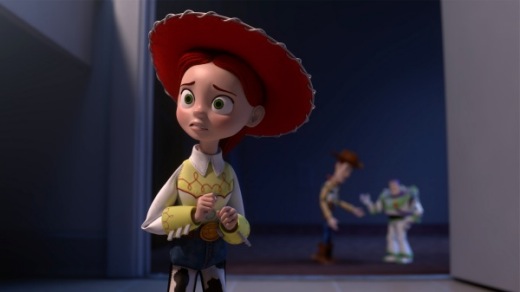 - The first 10 minutes find Woody, Buzz, Jessie, Potato Head, Prickle Pants and the rest of the toys on a road trip. The car their riding in suffers a flat tire and the family decides to spend the night at a remote motel.
- Prickle Pants is dictating how the sequences of how things occur in horror movies. Potato Head wants to walk around and check out the amenities of the motel. He ends up disappearing and the crew set out to find him.
- Through a sequence of events, they find Potato Head's arm, which guides them through the motel. During the process though, each of the toys disappear until Jessie is left on her own.
- A new toy named Combat Carl saves her from whatever monster is kidnapping the toys. Combat Carl is a grizzled, haunted war veteran who is missing his left hand.
- The first 10 minutes end with Jessie cowering in a bath tub, behind shower curtains after Carl has been attacked by the monster. We see three slash marks slice through the shower curtain before the scene ends.
- Toy Story of Terror will air on ABC on October 16 at 8 p.m.
More D23 Expo coverage:
Maleficent and Cinderella are just a couple of fairy tales Disney is bringing to live action. Read the D23 details.
Tom Hanks and Emma Thompson look like Oscar contenders in Saving Mr. Banks.
Find out what is planned for Marvel, DisneyNature and Star Wars over the next couple years.
Catch up on all the big plans revealed today at D23 for Disney Animation Studios!
More Planes and the return of Captain Hook! Read about it in our Disneytoons D23 recap!

You Pick the Box Office Winner: 'Elysium' vs. 'We're the Millers' vs. 'Planes' and More!

You Pick the Box Office Winner: 'Elysium' vs. 'We're the Millers' vs. 'Planes' and More!