Family moviegoers can look forward to seeing Where the Wild Things Are and Cloudy with a Chance of Meatballs in IMAX theaters this fall, Greg Foster, chairman of film entertainment, announced yesterday at the Mira Mesa Market Center's Edward's Cinema. A small crowd of Comic-Con press attendees gathered for IMAX's presentation and Q&A, a 15-minute drive away from the convention center. 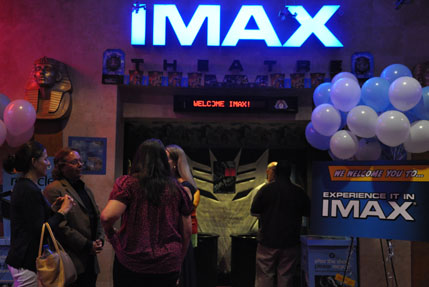 Although the presentation didn't include any Avatar footage, they showed a seemingly scripted clip of director James Cameron talking about the movie. "Watching Avatar is like dreaming with your eyes wide open," Cameron says. IMAX CEO Richard Gelfond, who had already viewed 20 minutes of the film, says, "There's a lot of hype around a lot of things, but this one actually lives up to it." So far, IMAX has planned exclusive, consecutive releases for its movies (which caused a delay in the Harry Potter IMAX opening due to Transformers 2's run), but they purposely left January and February 2010 open in anticipation for Avatar's long run. We'll soon see if the footage debuting today lives up to the hype…

Foster also announced its five-picture deal with Disney, starting with A Christmas Carol, then Alice in Wonderland. They've also set their sights on a whole bunch of other movies that they're interested in, but haven't officially signed, including Harry Potter and the Deathly Hallows Part 1 and Part 2, Inception, Tron, Spider-Man 4, Guardians of Ga'Hoole, The Adventures of Tintin, Happy Feet 2, and The Hobbit films. About 75 percent of the films Disney produces next year will be in 3-D, Foster says.

The presentation included IMAX 3D footage from the beginning of Harry Potter and the Half-Blood Prince, opening in IMAX next Wednesday. Three Death Eaters fly invisibly through London, taking the audience on an immersive thrill ride; Potter fans will be pleased. We also saw the trailer for A Christmas Carol, which showed an extremely haggard and aged Scrooge (voiced by Jim Carrey)—quite a hideous sight in full-blown, 3-D detail up on a 40-foot screen.

The presentation wasn't without its "glitches"; Gelfond addressed the issue of audiences associating IMAX with the 70-foot-tall screens and not the smaller cineplexes. "IMAX comes in all shapes and sizes, but we won't put our name on it unless it's IMAX," Gelfond says. He adds that they will try to better notify the public of the differences. "We've kind of hired a branding firm to work with us on that."

Related Comic-Con '09 Links:
Comic-Con Central - Exclusive Video Interviews, Comprehensive Coverage and More!
Comic-Con 2009 Photo Feature - All the Stars, Costumes and Everything Else Worth Seeing from the Con