As we enter another weekend at the box office (and the first of the month of December), the question on everyone’s mind is whether The Twilight Saga: New Moon can somehow pull off another win, putting it in the top spot three weeks in a row. Don’t get me wrong, it’s totally possible this week since there’s really not a whole lot of juicy big-screen entertainment. Here’s what we’re looking at …

Armored
What’s The Scoop: A heist flick that follows a group of armored car drivers who decide to team up and plot to rob a truck carrying $42 million.
Why It Might Win The Weekend: We haven’t had a cool heist flick in awhile, and while the cast is most definitely B-list (Matt Dillon, Laurence Fishburne, Amaury Nolasco, Milo Ventimiglia), advanced buzz is decent enough to help this one pick up some speed at the box office.
Brothers
What’s The Scoop: Natalie Portman, Jake Gyllenhaal and Tobey Maguire star in this gut-wrenching drama about a soldier long thought dead (Gyllenhaal) who returns home from war to learn that his dysfunctional brother (Gyllenhaal) has moved in with (and on) his wife (Portman).
Why It Might Win The Weekend: Well it certainly carries one of the more enticing on-screen trios we’ve seen all year, and decent advanced buzz could give it a shot at number one. 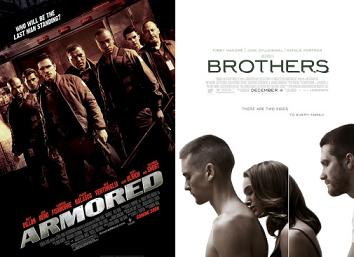 Everybody’s Fine
What’s The Scoop: A widower (Robert De Niro) sets out on an impromptu road trip to reconnect with his estranged family.
Why It Might Win The Weekend: Awards buzz has been circling De Niro, and the cast – which includes Drew Barrymore, Sam Rockwell and Kate Beckinsale – is certainly nothing to sneeze at. A quiet marketing campaign, however, may hurt its opening weekend sales.
Transylmania
What’s The Scoop: In this spoof on the vampire genre, a group of college kids spend a semester abroad in Romania where they run into a group of vampires who probably won’t make you laugh.
Why It Might Win The Weekend: Um, vampires? I mean, that’s the only thing this has going for it right now – the fact that it’s a comedy about vampires and the number one film at the box office includes vampires. Will that equal a win? Eh. 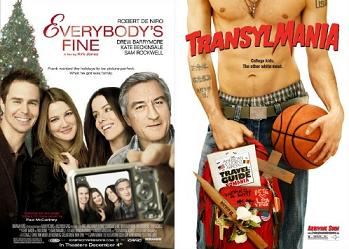 My Prediction: While I’d love to think that Brothers and Everybody’s Fine contain enough star power to knock Bella, Edward and Jacob out of the number one spot, I feel the target audiences for those films may be too busy holiday shopping this weekend. So, I’m chalking one more up to The Twilight Saga: New Moon.
Now it’s your turn – who do you think will win the weekend?
Like it? Share it: