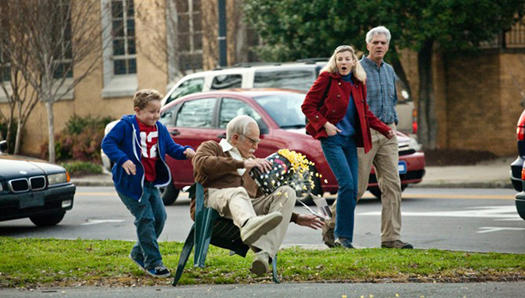 We barely scraped the bottom of the barrel, but here are some truly tasteless (and sometimes hilarious) movies to celebrate this weekend's Bad Grandpa. 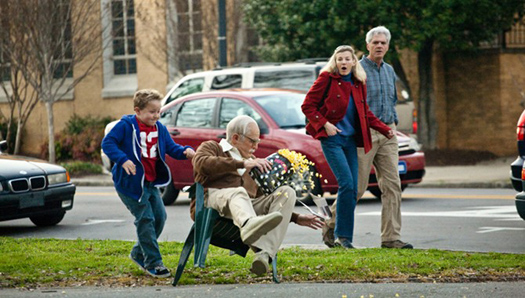 If there's anything the Jackass guys know, it's tasteless comedy (but come on, you KNOW you've giggled). In Bad Grandpa, in theaters everywhere this weekend, Jackass impresario Johnny Knoxville pranks unsuspecting victims across the country by posing as young Billy's grandpa Irving Zisman, a character we first met back in 2001 on the Jackass MTV show. He's far from a great role model; he drinks too much, takes the kid to a strip club, hijacks a little girls' beauty pageant and tosses his dead wife's body into a river all to the horror of unwitting onlookers. So let's celebrate--or lament--some truly tasteless movies of (mostly) recent times. We've barely scraped the bottom of the barrel so feel free to add suggestions to this list in the comments.

The clips below are SFW.

Pink Flamingos No list of tasteless movies would be complete without at least one from director John Waters, who really could single-handedly populate this entire list. This 1972 NC-17 cult classic centers on one couple's attempt to unseat Divine as the "filthiest person alive" via black-market baby ring, murder, cannibalism, castration and feces both human and canine. Rotten Tomatoes: 82%

South Park: Bigger, Longer and Uncut (R) Trey Parker and Matt Stone wear tasteless like a medal of honor, and there's no doubt their first movie set the bar for offensive, vulgar and, well, tasteless movies. Blasphemous, flatulent and middle-finger flippant, it's also some of the funniest s*** you'll ever see. Rotten Tomatoes: 82%

Norbit (PG-13) Quite possibly one of the most unfunny and offensive films ever made stars Eddie Murphy as wimpy Norbit, Eddie Murphy as his fat harridan wife, Rasputia, and Eddie Murphy as an old Chinese man. Just add fart jokes, fat jokes, tossed babies, broken beds and a duck beheading. Funny, no. Tasteless, absolutely. Rotten Tomatoes: 9%

Freddy Got Fingered (R) Comedian Tom Green's short-lived Hollywood career was most likely short lived due to this revolting 2001 misfire called by some "the worst movie ever made." His attempts to be funny included wearing a bloody deer carcass, biting off a woman's umbilical cord and using it to swing a newborn around. Rotten Tomatoes: 11%

Killer Joe (NC-17) Smutty Southern Gothic trash that you'll either find odious or entertaining, depending on your tolerance for Jerry Springer. Matthew McConaughey is brilliant as Joe, a Texas cop/sadist who kills people as a side job, who's hired by a drug-dealing moron to kill his mother for her insurance money. Joe agrees, but takes the kid's virginal young sister as a retainer. Depravity (and vileness involving a chicken drumstick) ensues. Rotten Tomatoes: 77%

A Dirty Shame (NC-17) John Waters' other movie on this list is his last, a 2004 film starring--who else?--Johnny Knoxville as a small-town mechanic leading a sexual revolution who enlists various acolytes, including a nymphomaniac housewife (Tracey Ullman), to charge the gates of the unenlightened. Quadruple entendres, raunchy songs, crude sight gags and Selma Blair as an exotic dancer with massive breasts who goes by "Ursula Udders"... oh yeah, it's all here. Rotten Tomatoes: 53%

Grown Ups 2 (PG-13) You can probably pick any Adam Sandler movie out of a hat and get a week's worth of juvenile humor your inner six-year-old boy will appreciate, but his latest was called out in Variety as among the "slackest, laziest, least movie-like movies from a major studio in a decade." Who doesn't want to see a deer peeing on Sandler's face and castrating Taylor Lautner, though? Rotten Tomatoes: 8%

Movie 43 (R) Those masters of tasteless humor, the Farrelly brothers, brought us this piece of crass featuring 12 interconnected skits that raised gross-out humor to new levels. That it stars no less than Richard Gere, Naomi Watts, Halle Berry and other Oscar types is possibly more shocking than any of its racist, homophobic, sexual and all-around obscene humor. Rotten Tomatoes: 4%

A Haunted House (R) When your over-17 movie's opening scene is aimed squarely at five year olds, you're doing something wrong. The extended fart joke at the beginning is hardly the lone tasteless gag in this disaster--there's ghost rape, sex with stuffed animals, a priest who stores cocaine in his crucifix and Nick Swardson. 'Nuff said. Rotten Tomatoes: 10%

The Hangover Part III (R) Somehow managing to be worse than its predecessor, this dismal attempt at funny falls flatter than a beer at a Mormon wedding. For whatever reason they decided to hinge the whole thing on Ken Jeong's obnoxious Mr. Chow, inflict unnecessary animal cruelty jokes on the audience, and commit the cardinal sin of comedy: being totally, opprobriously unfunny. Rotten Tomatoes: 19%

Anything by Harmony Korine The avante garde filmmaker revels in showing the dregs of humanity on-screen, from the glue-huffing deviants in Gummo to the miscreant criminals in Trash Humpers to the handheld freak show that was Julien Donkey-Boy. His most recent movie, Spring Breakers, was still sleazy but more accessible to the mainstream thanks to James Franco's outstanding turn as the gold-grilled Alien.

Get tickets for Bad Grandpa, watch our exclusive cast interviews and more, here.

MORE FROM AROUND THE WEB: