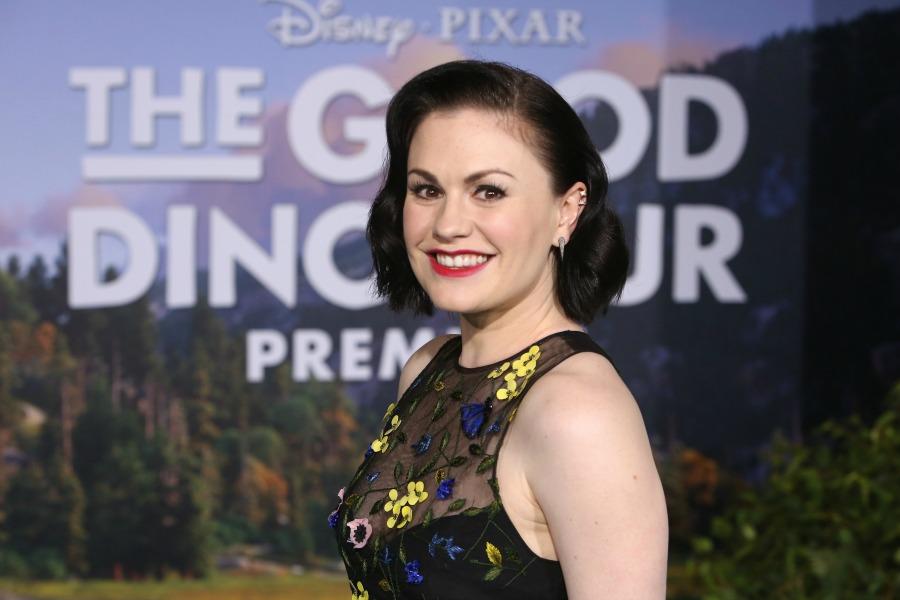 Anna Paquin: From 'True Blood' to T-Rex in 'Good Dinosaur' 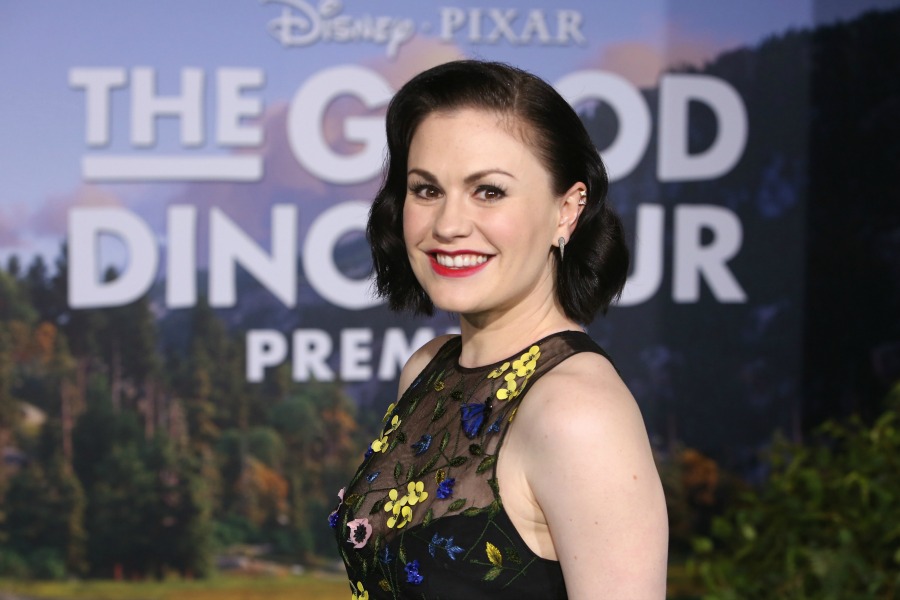 Anna Paquin is best known as a star of HBO’s racy vampire series True Blood. But now she's exploring the world of animated family film as the voice of teen Tyrannosaurus Rex, Ramsey, in Disney-Pixar’s The Good Dinosaur. In the film, an Apatosaurus named Arlo gets lost and meets the tough but kind T-Rex family consisting of Ramsey, her brother Nash (A.J. Buckley) and dad Butch (Sam Elliott), whose family business is herding longhorns.  I sat down with Anna to get her opinions on the film and her career now that she’s a mom of 3-year-old twins.

TARA MCNAMARA: So, Anna, Ramsey is a cattle rancher Texan T-Rex. How was this pitched to you?

ANNA PAQUIN: They asked me if I’d like to be in a Pixar movie and, because I’m not insane, I said “Yes, please!” Honestly, I didn’t ask too many questions about concept or character. I was like, “I don’t care what it is, I’ll do whatever you want!”

TM: And, when you found out the details?

AP: This is even cooler than I thought! As a woman in this industry, you don’t often get to play, or voice play, female characters that get to hold their own with the boys, that are not somehow sidelined because they’re girls. She’s every bit physically the equal of these two tough dudes in her family [Sam Elliott voices T-Rex dad Butch and A.J. Buckley voices teen T-Rex brother Nash] and more than holds her own … and I like that. I like strong female characters, especially stuff that’s targeted at kids.

TM: Have your kids [twins Charlie and Poppy] seen this yet?

TM: I know! I tried to take my 3-year-old to see Planes and he tried to climb the screen and hug the characters…at a press screening!

AP: How sweet, though! I always wondered, do you, do press and critics, take their kids to stuff like this? 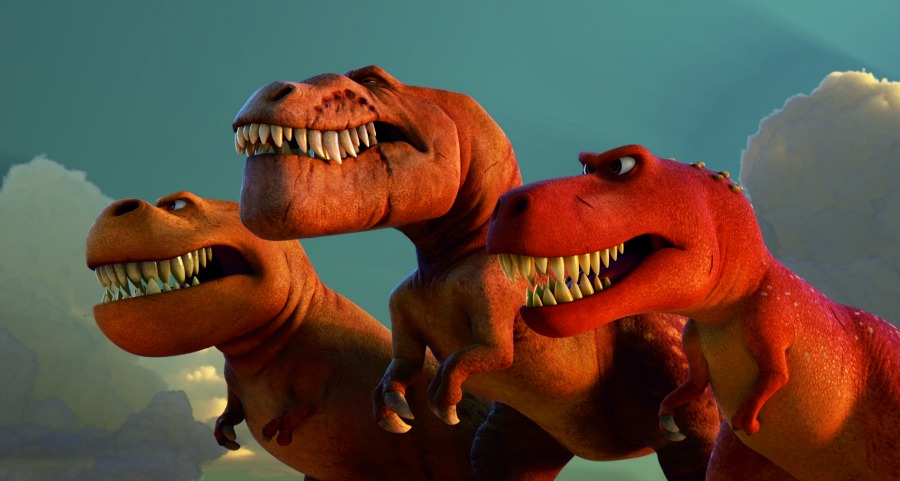 TM: Ramsey and Nash’s relationship versus what you see with your twins, how does it compare?

AP: Honestly, I never thought about it in terms of that. My point of reference is my older brother.

TM: Oh, tell me about THAT!

AP: I’m the youngest of three. Sometimes I like to say, I got to live because my older siblings allowed it to happen! Between the hours of us getting home from school and my mom getting home from work, when they were in charge, it was sort of jungle rules, you know? I was more of the Arlo in that situation than the Ramsey.

TM: Do you relate more to Arlo than Ramsey?

AP: As a kid, I can relate to that, but now, I feel like Ramsey is more my speed. I’m very protective of the people I care about. And, I think the embodiment of that being an actual dinosaur that can really eat people and kick some ass…

TM: And chooses not to!

AP: …but will use her power and her strength in ways that are good and for the greater good, and for those who need it, and sticking up for underdog. I like that a lot…

TM: How would you say being a mom has changed your career?

AP: I am who I am. Obviously, there’s nothing I wouldn’t do for my kids. I’ve always been very vocal on behalf of my friends or anyone I care about. I will go to the mat for pretty much anyone who I care about…I will get more upset if my best friends or loved ones are being poorly treated than if someone is being horrible to me; I will stick up for someone else so much faster. It changed me as a natural evolution of who I already was.

TM:What movies do you like to watch as a family together, or are you watching anything since they’re 3?

AP: We like a lot of Pixar; I’m not just saying that, we do! For me, I just want to put things around my kids that are interesting creatively and have intellectual and artistic merit aside from just being entertainment.

I’ll be totally fine if they never watch anything that’s broadcast with commercials because I think some of the things that are thrown at you are just overwhelming, unnecessary and so NOT what I want for my kids. It’s like, we don’t need that toy, no we’re fine, no thank you. The idea that we’re being sold something as part of entertainment – I know that’s the business we’re in and I’m being a hypocrite, but, hey, I’m making different choices with my kids.

[But, we’re watching] a lot of the Disney movies and most of the ones I saw when I was little that I still have a soft spot for.

TM: What are those?

AP: The Lion King, that came out when I was 13…ish? I didn’t see a lot of movies as a kid...then, there was a rerelease when I was a kid, The Lady and the Tramp…and stuff like that. I just want to be sure the kinds of things my kids are exposed to are high quality. I know that sounds really pretentious, but it’s true!

TM: Let’s talk about YOUR canon of films. Have your stepchildren [15-year old Billy and 13-year old Lilac are husband Stephen Moyer’s children from previous relationships] seen any of your films and what was their reaction?

AP: In general, I like to keep my kids and my work in two separate bubbles, as far as talking about details. I’d be really upset if someone else talked about my kids in detail so I don’t really feel like it’s my place. Look, obviously I have this whole very rich life that includes lots of other people, but that’s not something I feel comfortable talking about.

TM: Of course, I understand.

AP: Out of respect to their moms…whom I have great relationships with and I’d really like not to piss off!  I kind of just assume people feel the same way I would if someone blabbed about my kids.

AP: This is Ramsey, she’s awesome! She’s really cool. This is definitely my favorite action figure of myself…and I have a few!

TM: When your kids do eventually see The Good Dinosaur, and they will of course, what do you want them to take away from your involvement in it and Ramsey in general?

AP: For starters, it’s nice…not just my kids, but in general…doing something my family – by that I mean, my mother, my sister, my brother – can watch without it being slightly awkward, like, ‘you know, I don’t know if I want to watch my daughter doing that.’ A lot of my work tends to be a little left of center!

What I really do like is the scene around the campground and [Arlo and the T-Rex family] are talking about their scars; [Arlo] says, “Omigod, I’m wounded!” and Ramsey says, “Yeah, but that’s going to scar up really good!” That’s what makes you who you are: where you’ve been, what you’ve been through. These are not things to feel bad about, these are the things that make you stronger. Going through hard times, it doesn’t take away the pain of that, but it doesn’t have to weaken you…and that’s one of the many lovely messages, I think, that’s in this film.