January 30th 2008, 7:06 pm
Just when you thought it was safe to turn off the bedlights, here comes Michael Bay, New Line Cinema and Platinum Dunes to give the 'ole revisionist history spin to another beloved horror franchise. After remakes of Halloween, The Hills Have Eyes and Dunes' own Texas Chainsaw Massacre, The Hitcher and Amityville Horror (and a planned Friday the 13th update)...is it really necessary to drag Freddy Krueger into the bloody fray?? Apparently so, according to the Variety report...one request for the new Nightmare on Elm Street: Throw original Krueger actor Robert Englund a bone (or a shiv). It just won't be the same without his devilish grin underneath the fedora. 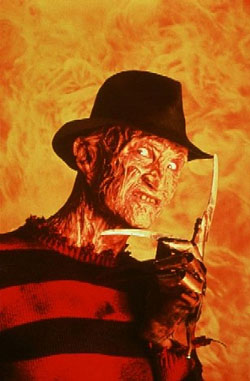