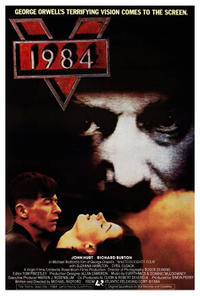 Looking for movie tickets? Enter your location to see which movie theaters are playing 1984/Logan's Run/Spacedisco 1 near you.

NINETEEN EIGHTY-FOUR, 1984, Park Circus/MGM, 113 min. Dir. Michael Radford. John Hurt and Suzanna Hamilton are lovers trapped in an oppressive police state who heroically fight against the all-powerful "Big Brother." LOGAN'S RUN, 1976, Warner Bros., 120 min. Dir. Michael Anderson. Life in the future is a dream filled with pleasurable pursuits. The only catch: Once you turn 30, you're eliminated. Michael York plays an expert at catching people who try to flee the system - a system he gradually comes to question.